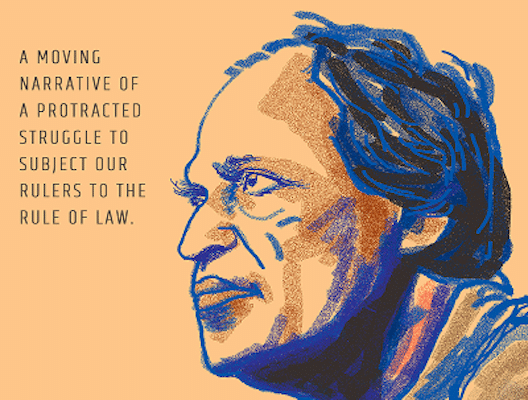 [This is the full-text of a speech the author had drafted to deliver at the launch of the book The Fight to Win Rights: Selected Writings of P. A. Sebastian (Delhi: Aakar Books, 2021), edited and introduced by him, on July 24, 2021, at a zoom meeting. A five-minute limit for the speakers, however, meant that his speech had to be cut short to be as brief as possible. Hence the full-text over here.]

The Fight to Win Rights: Selected Writings of P. A. Sebastian is a collection of writings of the people’s lawyer P. A. Sebastian (1938–2015), originally written in the corridor of time between March 1980 and January 2011. Almost all the pieces first appeared in the Economic & Political Weekly, except one, that was first published in MRZine, the then online supplement of the independent, international socialist magazine Monthly Review, and the Analytical Monthly Review, its Indian counterpart. I have undertaken the job of selection from among Sebastian’s available writings, editing, and writing an Introduction, on behalf of the Committee for the Protection of Democratic Rights (CPDR) and “Friends of Sebastian,” and so has Uttam Ghosh, the artist who has designed the book’s cover that graces this text of my speech.

Upon reflection after I had put this collection of writings together, and when I set out to pen the Introduction, I realized that taken together this is a moving narrative of an ongoing protracted struggle to subject our rulers in India to the rule of law, at the heart of which is the fight for the principle of equality before the law. Civil liberties and democratic rights, although they find expression in the law and the Constitution of India, have never just been granted by the capitalist power structure and the ruling classes. They have had to be demanded and wrested from that very reluctant and resistant power structure, and the struggle to win them has always been a hard one. 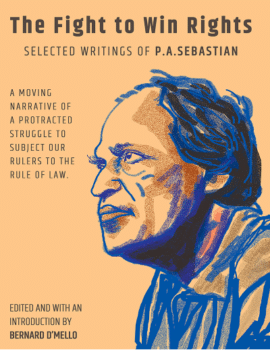 Moreover, even after some of these rights were won, the gains have never been secure, for power has remained with capital and the capitalist state. There has been a chronic denial of justice to ordinary people, this despite the existence of a modern constitution and bourgeois law, and a whole gamut of ongoing struggles against class, caste, community, ethnicity, religious and gender-based oppressions. The history of the struggle for civil liberties and democratic rights in India has, nevertheless, been made from below. The hardships and struggles of the people and the democratic traditions of the oppressed have always played an indispensable part in it. Fidelity to the truth about India’s post-Independence past demands that kind of perspective, and this is what Sebastian’s writings provide.

The collection of P. A. Sebastian’s writings, taken together, is a graphic and profoundly upsetting characterisation of the Indian judicial system in so far as the poor, oppressed castes, women, Muslims, and other religious minorities, and Adivasis (tribal people) are concerned. What has been going on in and outside the courts continues to produce harmful, even prejudicial, and discriminatory, outcomes, which reflect the nature and character of a society that accepts, even condones and, at times, celebrates, disparities in political power and economic resources. Sebastian’s writings throw light on the murderous society that India has become. The judiciary has failed as guardian of the rule of law, deferring often to the executive, and thus, in effect, acting as guardian of the law of class rule. The repressive apparatus of the Indian state has, of course, been acting as gendarme of the law of class rule.

Sebastian, in his writings in The Fight to Win Rights, is direct, and honest, unafraid to state unpalatable facts. Blunt and matter-of-fact, his words seem to be deliberately chosen to appeal to the conscience of people, his mode of expression reflecting his commitment to justice and the truth.

Let me give a few examples.

At the end of an essay that with concrete evidence from judgements concerning secularism, even those from the Supreme Court of India, casts doubt on the secular character of the Indian judicial system, Sebastian writes:

In accordance with our constitutional scheme one seeks remedial measures from the judiciary when the executive or even the legislature itself commits illegal acts. But what does one do when the judiciary itself commits unlawful acts? Obviously and ominously the remedy lies outside the system.

In an essay written in 1993 when the National Human Rights Commission was constituted, but virtual exclusion of the military and para-military forces from its purview precisely when there were then many allegations against them in Kashmir, the Northeast and Punjab, was a matter of deep concern, Sebastian wrote:

These forces have been put on “a high pedestal beyond the pale of ordinary laws,” this in the name of the “unity, integrity and security of India,” thereby creating “sacred entities at whose alter the people of India can be sacrificed with impunity whenever it suits the interests of the powers-that-be. The propaganda about the armed forces reminds one of George Orwell’s 1984. Torture, rape and murder become acts of patriotism, while the attempt to expose them before the … public became anti-national and unpatriotic.”

Reviewing a report in 1996, Blood in the Valley—Kashmir Behind the Propaganda Curtain: A Report to the People of India, written by a few civil liberties and democratic rights’ organisations, Sebastian writes:

The brutality of torture … defies belief.

… nowhere else in the world has religion been so maliciously exploited to perpetrate and perpetuate injustice on a large section of the population as has been done in India.

When on July 23, 1981, the authorities brutally deported thousands of Bombay’s pavement and slum dwellers, throwing them out of the city’s limits, Sebastian recorded:

The government has made life impossible for people who do not have a place to stay or the means to acquire such a place. Does this mean that only propertied people can be Indian citizens?

Deeply anguished by credible reports that there had been some 25,000 “involuntary disappearances” in the province of Punjab during the period 1984–94, and that a human-rights defender, Jaswant Singh Khalra, who had painstakingly documented a fair proportion of these disappearances, was abducted by the Punjab Police, on September 6, 1995, from his residence and involuntarily “disappeared,” Sebastian notes:

The state deliberately uses its powers to “suppress or eliminate systematically members of distinct ethnic, religious, national or political groups … by killing as many members of the group as is necessary to shatter their capacity to persist and act collectively.” And, as the operation is on, the state uses the “media to justify the destruction of victim groups by blaming and dehumanising them.”

On the matter of the Supreme Court of India, in the Bhopal gas disaster cases against Union Carbide Corporation, transferring to itself all the cases, both civil and criminal, and quashing them in terms of an apocryphal settlement in 1989, the decision openly at variance with laws and precedents, Sebastian asks:

Does the law vary in accordance with the colour and wealth of the litigant?

The resistance against the violence of the landlords leads to breakdown of ‘law and order’, therefore a whole act is enacted to put down resistance and ‘peace’ is restored so that the landlords can continue their plunder.

Sebastian’s writings in The Right to Win Rights and his arguments in the cases that he fought in the courts, the gist of which I have tried to bring out in the Introduction to the book, suggest that they can be seen as part of a small, albeit fledgling, collective progressive trend in the practice of law in India from the 1970s onward, which has initiated, what I would like to call, a “jurisprudence of insurgency.” Drawing on the work of Michael E. Tigar and Madeleine R. Levy in Law and the Rise of Capitalism (New York: Monthly Review Press, 2000 / Delhi: Aakar Books, 2005, pp. 253–55), I have learned from their elaboration of what is meant by this expression and applied it in the present context. A jurisprudence of insurgency in the present context is one that tries to transcend bourgeois law by creating and elaborating rules and principles of law in line with the aspirations, goals, and values of contemporary socialist-democratic struggles challenging the capitalist power structure. It interprets liberal-capitalist rules and principles of law in different ways, exploring their limits to obtain judgments that advance the cause of socialist-democratic social change.

A good example would be the then Senior Advocate in the Supreme Court of India, Gobinda Mukhoty succeeding in getting from SC Justices P. N. Bhagwati and Baharul Islam a judgment (in People’s Union for Democratic Rights vs. Union of India, Delhi Development Authority, and Delhi Administration, on September 18, 1982) acknowledging that the scope of the Fundamental Rights extends to the living and working conditions of labourers. Potentially this judgment set limits to capitalist and “semi-feudal” exploitation and oppression of India’s working class.

Hopefully, in a cumulative way, the advancement of a jurisprudence of insurgency would over time lead to greater realization that equality is impossible without liberty, and liberty is unattainable without equality. [In the case of liberty without equality, the rich will be “freer” (have more options) than the poor; in the case of equality without liberty, some will have more political power than others.] Sebastian devoted his life for such a revolutionary moment to come.