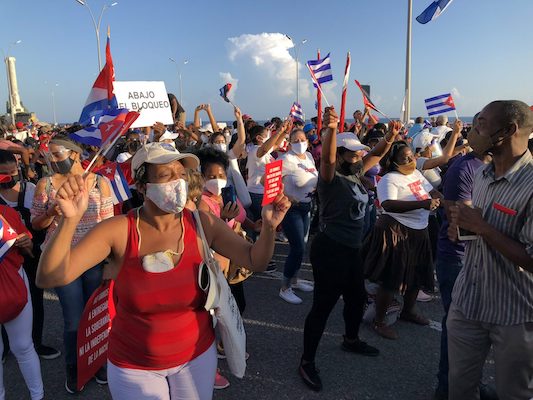 Cubans take part in a mass rally in defence of the Cuban Revolution and calling for an end to U.S. sanctions, July 2021. Photo: Helen Yaffe

On Sunday 11 July, dozens of anti-government protests, apparently coordinated via social media, took place simultaneously throughout Cuba. In several places, including in San Antonio on the outskirts of Havana and in Matanzas, where COVID-19 cases have been surging, protests turned violent, with windows smashed, shops looted, cars overturned, rocks thrown and people assaulted.

The international media has exaggerated and manipulated these events to depict mass opposition to the Cuban government, police repression of peaceful protests and a regime in crisis. Meanwhile, the role of external forces, the existence of a concerted social media war on Cuba, the pernicious impact of U.S. sanctions and the mobilisation of thousands of Cubans in support of the revolutionary government have been deliberately downplayed or ignored.

In most of the Americas, including in the U.S., such social disturbances are common, and often involve serious casualties and multiple arrests. In Cuba, however, the last violent protest was the Maleconazo uprising in 1994–the worst year of the so-called ‘special period’ of economic crisis in which Cuba’s GDP fell by 35% after the collapse of the socialist bloc which accounted for nearly 90% of Cuba’s trade. Hoping to push the country over the edge, the U.S. government enacted the Torricelli Act in 1992 and Helms Burton Act in 1996, tightening U.S. sanctions and obstructing Cuba’s trade with the rest of the world. While scarce resources were harnessed to prioritise welfare, Cubans faced shortages in every sector: food, fuel, medicines, housing, industry, transport, and so on. Life was tough.

These conditions are returning to Cuba today as a direct result of U.S. sanctions. Reversing Barack Obama’s tentative rapprochement, the Trump administration tightened the U.S. blockade to unprecedented levels, adding 243 new actions, measures and sanctions to cut off Cuba’s trade with the world, fine ships carrying fuel to Cuba, scare away foreign investors, block remittances and family visits, and prevent Cuba’s access to the international financial system which is dominated by U.S. dollars.

Over 50 of those coercive measures have been taken since the beginning of the pandemic, severely impacting Cuba’s capacity to import medical ventilators, spare parts, syringes, medicines and their raw materials, food and fuel. Even international donations of medical supplies to Cuba are blocked. This creates an agonising dichotomy: thousands of Cuban medical specialists have treated COVID-19 patients in 40 countries and the island of Cuba has the only domestically developed COVID-19 vaccines in Latin America, and yet Cubans face exhausting daily queues for basic goods. Their frustration should not surprise anyone.

Joe Biden recently said the US 'stands with the people of Cuba', even as the US continues to impose a trade embargo on its island neighbour.

The UN estimates that the embargo has cost Cuba $130bn since 1962, enough to buy a Covid-19 vaccine for everyone in Latin America. pic.twitter.com/oC6xj7OGn0

With the combined impact of sanctions and the pandemic, Cuba’s GDP fell by 11% in 2020; tourism fell 75% and imports fell 30% compared to 2019, hence the unfilled shelves and long queues. At the same time, the social media campaign, oiled with millions of U.S. Congress-approved dollars and orchestrated from Miami, blames the Cuban government for these hardships and dismisses U.S. sanctions as an excuse or a lie. It seeks to channel the Cuban people’s frustrations into political opposition.

Since late 2020, Miami-based social media ‘influencers’ and YouTubers have urged Cubans to take to the streets, with some even offering money, or phone credit, to anyone who carries out, films and uploads acts of violent disorder and arson.

At an international press conference on 13 July, Cuban Foreign Minister Bruno Rodriguez presented evidence of a new media campaign. On 15 June, the hashtag #SOSCuba was launched by a U.S. company, the same day it was authorised to receive state funding. On 5 July, hashtags appeared calling for a “humanitarian corridor” in Cuba, with bots and troll farms being used to disseminate messages on Twitter through fake accounts–one doing five retweets per second on 10 and 11 July. Twitter users changed their geolocations to look like they were in Cuba, and images of both a huge protest in Egypt and of Argentinians celebrating their America Cup victory were credited as mass mobilisations in Havana. The following Friday, a video claiming to show Cuban police shooting a man dead at his home was exposed by Cuban media when the same man was interviewed in good health.

Cuban news just exposed a video circulating of a man apparently being killed in his home by Cuban police. The man was arrested at his home for violent disorder & footage shows him walking out calmly in handcuffs. He was interviewed today. The blood stained floor was a lie.

The Trump sanctions and the social media war are the contemporary versions of the ‘two track’ policy pursued by the U.S. since the Cuban Revolution: economic sanctions and the promotion of an internal opposition. The objective is ‘regime change’, as articulated in the secret memorandum of 6 April 1960 written by Lester Mallory, U.S. Deputy Assistant Secretary of State for Inter-American Affairs. Recognising popular support for the revolutionary government, he advised measures to “weaken the economic life of Cuba […] to bring about hunger, desperation and overthrow of government”.

Cuban President Miguel Diaz Canel responded to events on 11 July in a similar manner to Fidel Castro during the Maleconazo in 1994. He went to San Antonio to speak to local people, recognised their legitimate frustrations, and then led a march through the community in defence of the Cuban Revolution.

Hours later, he appeared on television to inform the public about the events, acknowledge Cubans’ daily difficulties and give an fervent denunciation of U.S. imperialism and the social media campaign. He declared: “The streets belong to the revolutionaries!”. At that signal, thousands of Cubans mobilised in towns and cities around the country to defend Cuban socialism.

The following days have seen a tense calm, with one violent protest in Arroyo Naranjo on the outskirts of Havana in which one person died and more sustained injuries, including police. Small skirmishes have taken place since. Internet access was temporarily suspended, presumably to prevent social media being used to coordinate more protests. Car radios and workplace televisions were tuned into a four-hour broadcast by the president and government ministers who discussed the events, analysed the country’s situation, and denounced U.S. intervention. From Florida, there were threats of a naval flotilla and calls for military intervention.

With mind-boggling hypocrisy, Joe Biden expressed his concern about the situation, and called on the Cuban government to listen to the people. But if Biden were actually concerned, and listening to the Cuban people, he would lift the sanctions. This was a demand I heard from every Cuban I spoke to at a rally of 200,000 in Havana on 17 July, when hundreds of thousands took to the streets around the island.

Cuban authorities have made it clear that violent disorder will be punished through the legal system. There may be more conflict ahead, but as the lines are drawn, no-one should underestimate the resilience of the Cuban Revolution.