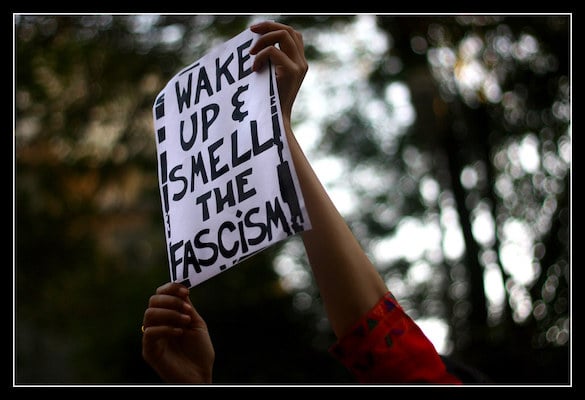 THERE has of late been an upsurge of extreme right-wing, fascist, semi-fascist or neo-fascist parties all over the world in a manner reminiscent of the 1930s. Fascist governments invariably serve the interests of monopoly capital in general, and of the newer, less “liberal” and more reactionary section of it in particular, which is why Georgi Dimitrov, president of the Communist International, had, at its Seventh Congress, characterised a fascist State as the “open terrorist dictatorship of the most reactionary section of finance capital”; but fascist movements of this earlier era had begun as movements against big business. Having acquired a following through their anti-big business or “Right-radical” rhetoric, they then made an alliance with big business for coming to power, and betrayed their own following. Hitler had done this in the bloodiest possible manner during what is called the “night of long knives” when his own earlier close associate Ernst Rohm, the head of SA, and a host of other Nazis were murdered on his orders.

The contemporary neo-fascist and extreme Right movements however differ from their earlier counterparts in this respect: they eschew any Right-radical rhetoric from the very beginning. There are no fulminations from them against big business, no attempt on their part to cash in on people’s legitimate anger against a system that keeps them unemployed. In today’s context of course, such anti-big business rhetoric would necessarily have to take the form of an attack on neoliberal economic policies, since these policies are the quintessential expression of the hegemony of globalised capital with which domestic big business is integrated. But the contemporary neo-fascist and extreme Right movements all over the world are conspicuous by their silence on, and hence by implication their endorsement of, neoliberal economic policies.

In some cases there is open and effusive support, as opposed to tacit endorsement, for such policies from the very beginning, and for the big bourgeoisie that stands behind such policies. A prime example of this is the BJP which has become close to big business and to globalised capital under Narendra Modi. In fact Modi’s proximity to big business, when he was the chief minister of Gujarat, is what prompted Indian big business to “adopt” him openly after a Gujarat investors’ summit some years ago and to promote him successfully as the next prime ministerial candidate. Modi effected the corporate-Hindutva alliance that has propelled his ascent to power; and a crucial aspect of forging this alliance was the marginalisation of Hindutva fronts like the Swadeshi Jagaran Manch that earlier espoused some sort of a radical-Right programme. Once in power, Modi has rewarded his corporate backers in ample measure, not just through specific contracts and deals (of which the Rafale deal is considered to be a prime example), or through legislation to reduce workers’ rights and undermine the independence of the peasantry, but through a programme of massive privatisation of public sector enterprises. He has justified all this on the grounds that the big bourgeoisie constitutes the “wealth creators” of the nation! This, ironically according to him, justifies the handing over of the nation’s wealth to them.

But, let us leave aside Modi who is in a league of his own. Even other extreme Right parties in the world such as Matteo Salvini’s Northern League in Italy, which had originally appeared to oppose neoliberal policies at least in the context of the European Union, an expression of which was its opposition to the common currency Euro, have now quietened down and accepted the entire gamut of EU’s orthodox economic measures.

The endorsement of neoliberalism by the extreme Right in Europe was formally expressed recently by a joint declaration by sixteen European extreme Right parties, which include Victor Orban’s Fidesz in Hungary, Marine Le Pen’s National Front in France, Freedom Party of Austria, Law and Justice Party of Poland, Vox of Spain, and the Northern League as well as Brothers of Italy from that country. In this declaration there was not a single word devoted to issues of economic policy (Thomas Fazi, The Delphi Initiative, July 9). The need to preserve national cultures within Europe was emphasized, as was the Judeo-Christian tradition of that continent (invoked by the Right as a way of attacking religious minorities); but there was no mention of any withdrawal from the common currency or any repudiation of the draconian imposition of austerity on every member-State that is associated with the common currency. True, at the moment, because of the pandemic, the EU has suspended the tight fiscal discipline of its Stability and Growth Pact (SGP) and allowed member countries some leeway in the matter of fiscal deficits, but that suspension is supposed to be only temporary; and the European Commission has already stated recently that the SGP would be back in force in 2023. The declaration of the extreme Right parties does not even ask for a deferment of this target date for the reimposition of SGP.

The question arises: why has the extreme Right become so tame, so accommodative towards big business, even before it has come to power in most of these countries? Why does it differ in this respect from its earlier incarnation in the 1930s? The basic answer to this question lies in the fact that unlike in the 1930s when the finance capital of any country, even though having an international reach, was essentially nation-rooted and nation-State aided, contemporary finance capital is globalised. It is globalised capital confronting the nation-State. To counter neoliberalism and the fiscal austerity it invariably entails, a country would have to step out of the globalisation that enmeshes it within a vortex of global financial flows and thereby undermines the fiscal autonomy of its State. In the European context it would mean stepping out of the European Union, since the EU is the instrument through which the hegemony of globalised capital is expressed. The finance capital originating in any particular country would be opposed to any such stepping out since it is integrated into a system of globalised finance capital. An agenda of stepping out therefore would have to be based on the support of other classes, above all the working class; and the extreme Right is not known to represent or promote working class interests except only to dupe the workers.

The objections to the European Union emanating from the extreme Right therefore remain confined to “cultural” issues which can be accommodated without any threat to the hegemony of globalised capital; indeed it is of some benefit to globalised capital as it shifts the discourse away from matters of livelihood, like unemployment and economic distress, and confines it to “national identity” and the threat to the “Judeo-Christian tradition”. It shifts the discourse away from the material issues affecting the working class, and hence suits the purposes of globalised capital.

There is however an aspect of the extreme Right’s acquiescence in the hegemony of globalised capital that deserves attention. To overcome the crisis of stagnation in which metropolitan capitalism and hence the world capitalist economy is caught, President Joe Biden of the United States has been advocating a revival of Keynesian policies: he has announced a set of measures that would increase government expenditure considerably and finance it through an increase in the U.S. fiscal deficit as well as taxes on capitalists (for which he wants an international agreement on a minimum corporate tax rate). The success of the Biden agenda requires as a minimum the concurrence of other capitalist governments to a similar agenda. Even if all advanced country governments agree on a similar agenda, unless the third world countries too are allowed fiscal autonomy, namely liberation from the stranglehold of “austerity”, then the dichotomy between an “austere” third world and a first world pursuing a New Deal-style agenda would be invidious for the former. But if even the first world is not agreed on an expansionary Keynesian agenda, then the U.S. alone pursuing such an agenda would not even work.

This is because a U.S. pursuing a Keynesian policy, unless it insulates itself completely through import restrictions, would increase imports from others not pursuing such a policy, which will enlarge its trade deficit vis-à-vis them. The U.S. would therefore be generating employment in other countries while getting indebted to them (for meeting its trade deficit), which cannot possibly last long. With the extreme Right acquiescing in the reimposition of fiscal austerity in Europe that would have the support of a spectrum of “establishment” political Parties, and the European Left not strong enough to resist such austerity, Europe appears unlikely to pursue a Biden-style agenda, which would therefore mean a persistence of the submergence of world capitalism in its current stagnation and crisis.