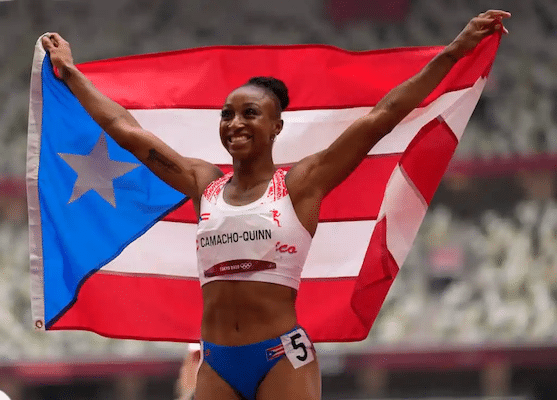 A few days ago, athlete Jasmine Camacho-Quinn won a gold medal for PR in the 100-meter hurdles at the Tokyo Olympics.

You may wonder how, being a colony of the USA, PR has its own Olympic Committee.

The Olympics and politics always go hand in hand and the existence of this Committee exposes the contradictions of a colony where although there are forces that want to turn us into a state of the empire, the cultural and national identity reflected in sports is much stronger.

The origin of our Olympic participation dates back to 1948 in a very complex socio-political context. At that time, a Puerto Rican delegation traveled to London to claim–and win–a place for PR in the Olympics.

Jasmin’s victory in these days of so much anguish also motivated controversies that expose the prejudice that some people in this country suffer about who is truly Puerto Rican. La Altleta was born in the U.S., the daughter of a Puerto Rican and an African American, but the Puerto Rican diaspora in the U.S., whether they were born there or migrated there, is viewed by some with suspicion. The curious thing is that most Puerto Ricans, more than 5 million, live there, while in PR there are only 3.2 million.

But the interesting thing is that although she was not born in PR and does not even speak Spanish, Jasmín feels so Puerto Rican that she refused to represent the U.S. in order to bring the triumph to PR. And as Albizu Campos said,

From Puerto Rico for RADIO CLARIN of Colombia, Berta Joubert-Ceci spoke to you.

Translated by Walter Lippmann for CubaNews.