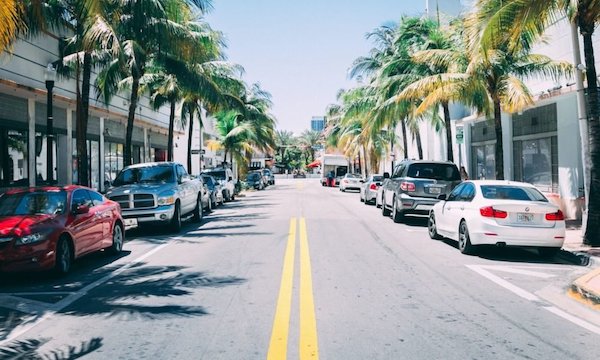 This summer, dangerous heat seems like it’s not letting up. Last week, we looked at two large metropolitan areas in the Southwest that were forecast to bake as the heat index exceeded 100°F. We found substantial social and environmental inequities that influence who’s more likely to get sick or perish due to extreme heat. Over the next week, there is more heat in store for cities across the country. The heat index (or “feels like” temperature) in Shreveport, LA, and Mobile, AL, is forecast to get as high as 104°F. Fresno, CA, is facing a heat index of up to 103°F. Miami is also expected to be hot, with a heat index above 100°F for most of the coming week. 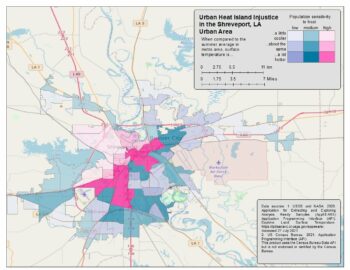 What do the inequities of keeping cool look like for heat-vulnerable populations in these cities? The situation is, unfortunately, similar to other cities across the country. More heat bearing down on cities where the most vulnerable already live in the hottest neighborhoods means potentially more heat-related illness and death among those populations. We have found that as the average summertime surface temperature of cities goes up, so do the percentages of populations that are more likely to get sick or die due to complications from extreme heat. This is likely to have an impact when high air temperatures hit these cities this weekend. Let’s look at the cities we mentioned in the maps and tables below. 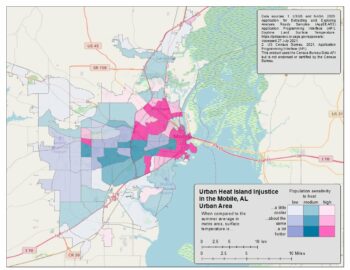 Mobile has a similar heat vulnerability profile as Shreveport, as the percent of both African Americans and people living in poverty increase along with surface temperature increases. Exposure to heat and population sensitivity to heat are higher near the built-up areas around the Port of Mobile. 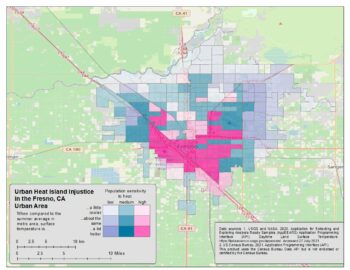 Fresno, a large population center in the Central Valley of California with a large Hispanic population, is also facing significant injustices in exposure of heat-vulnerable populations. The percent of Hispanics, the percent of people living in poverty, and the percent of people with low formal educational attainment (i.e., without a high school diploma) all increase as the mean summertime land surface temperature increases in neighborhoods across the city. 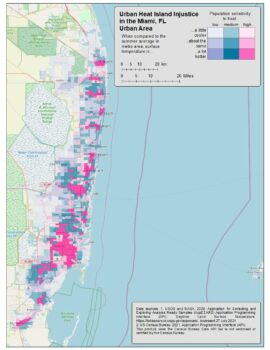 Miami is also a large metropolitan area with substantial diasporas of people of color that are most vulnerable to extreme heat illness or death, in particular Hispanics, African Americans, and Haitians. In the map below we can see multiple clusters of vulnerable populations indicated by the pink and fuchsia colors, representing communities such as Riviera Beach and Hialeah.

Clearly, there are large differences in populations and their exposure to heat in cities, and these differences are environmental injustices that magnify existing inequities in how temperatures across urban heat islands within cities are distributed. To protect people from extreme heat, we need emissions abatement to curb climate change, but we also need cities to step up to protect public health and modify urban environments to reduce heat exposure and vulnerability.

This blog post was co-authored with Dr Kristy Dahl.

Dr. Juan Declet-Barreto earned a Ph.D. in environmental social sciences, M.A. and B.S. degrees in geography, and an associate’s degree in geographic information systems, from Arizona State University. At UCS, his research maps, analyzes, and finds solutions to the unequal human health and livelihood impacts of environmental hazards, particularly those exacerbated by climate change.