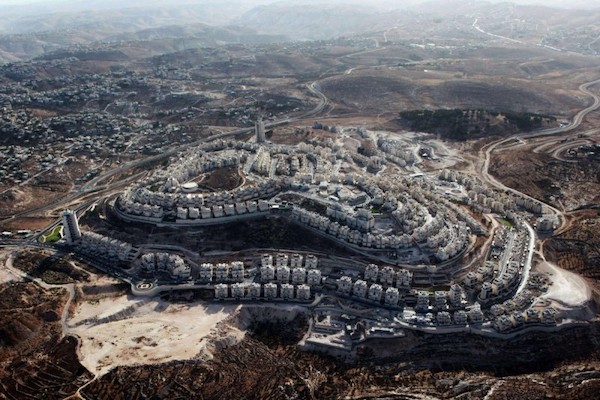 An aerial view of the Israeli settlement of Tekoa in the occupied West Bank. (Photo: Shutterstock)

The practice of forced eviction constitutes a gross violation of human rights, in particular the right to adequate housing.
— Commission on Human Rights, Resolution 1993/77

Canada has made international commitments to human rights and in particular to the right to adequate housing. Despite these commitments, it has failed to condemn the State of Israel for the forced evictions it is currently carrying out in the occupied Palestinian territories, and continues to be a supportive ally to Israel.

Forced evictions are a gross violation of the right to housing according to the International Covenant of Economic, Social and Cultural Rights (ICESCR), an international human rights treaty which both Canada and Israel have signed onto. If Canada is serious about its obligations to realize human rights including the right to housing, it must take a stand against the violations happening in Israel.

In May, forced evictions in Sheikh Jarrah captured the world’s attention. Sheikh Jarrah is one of the neighbourhoods in occupied East Jerusalem in which Israel is implementing its decades-long policy of “demographic balance”—a form of ethnic cleansing. This policy has been executed through settler-colonial tactics like land confiscation, displacement, and forced evictions based on discriminatory laws that subjugate Palestinians within the occupied territories.

In Sheikh Jarrah, Palestinian families are fighting in Israeli courts against being evicted from their homes to make way for Israeli settlers. On August 2, 2021, Israel’s Supreme Court yet again delayed their decision regarding an appeal from these families.

As their only alternative to the forced eviction, the Israeli Supreme Court offered these Palestinian families the option to stay in their homes and lands—which they have owned for decades—as “protected tenants” who would be forced to relinquish their ownership to Israel and pay an annual rent to Israeli settlers. The Palestinian families rejected this offer and continue to resist the actions of the Israeli state.

Of course, Palestinians across the occupied territories have little recourse or access to justice in Israeli courts, which serve to promote Israel’s colonial agenda. Thus, after decades of Israeli occupation and clear human rights violations, Palestinians continue to face discrimination, violence, and threats of forced displacement thanks to apathy and even active support for Israel from various states including Canada.

International human rights authorities like Human Rights Watch and Amnesty International have condemned Israel’s “crimes against humanity of apartheid and persecution” and called for Israel to “end its brutal repression of Palestinians.” Likewise, the former United Nations Special Rapporteur on Adequate Housing and the Office of the High Commissioner of Human Rights have explicitly called the forced evictions in Sheikh Jarrah violations of the human right to adequate housing.

Yet even in the face of irrefutable evidence, Canada has failed to condemn Israel’s forced evictions and other human rights abuses. In fact, it continues to be a supportive and vocal ally to the Israeli government, which recently expressed its commitment to expand Israeli settlements even further across occupied Palestinian land.

A recent report from Human Rights Watch noted that numerous housing policies are used by the State of Israel to oppress the Palestinian population and violate their right to adequate housing. Beyond forced evictions, these include making it impossible for Palestinians to obtain building permits in the parts of the West Bank that are under Israeli control (which amounts to 60 percent of the West Bank); Israeli forces demolishing Palestinian owned homes and structures for lacking a building permit; and the steady construction and expansion of Israeli settlements in the West Bank in violation of international law.

With the support of states like Canada and others, Israel can continue to violate Palestinian human rights with impunity. For example, Israel receives billions of dollars from the United States annually to fund its military and, indirectly, the expansion of Israeli settlements in the occupied territories.

Likewise, successive Canadian governments have treated Israel as a close friend and ally. The Trudeau government backs Israel in a variety of ways including through arms sales, a free trade agreement, and other economic, diplomatic, and security partnerships. In 2019, for example, Canada sent $13.7 million in military goods and technologies to Israel.

Canada has also stifled methods of peaceful protest against the Israeli government. For example, parliament passed a motion in 2016 formally condemning the Boycott, Divestment and Sanctions (BDS) movement—a Palestinian-led initiative designed to weaken the occupation and isolate it from international investment and trade.

BDS has been described as a “non-violent campaign that supports proven methods of conscientious objection to encourage Israel to respect international law,” yet the motion passed by parliament calls on the Canadian government to “condemn any and all attempts by Canadian organizations, groups or individuals to promote the BDS movement, both here at home and abroad.” By continuing to take this position on Israel, Canada is condoning and supporting a settler-colonial regime that continues to violate numerous human rights including the Palestinian right to housing.

Canada’s official position on BDS is particularly hypocritical given its supposed commitment to addressing its own colonization of Indigenous peoples through avenues like the Truth and Reconciliation Commission. We must ask ourselves if these commitments to reconciliation mean anything at all as Canada simultaneously supports another settler-colonial regime abroad.

Time to take a stand

We in Canada rely on the same international human rights laws as Israel or any other state party to the ICESCR. We cannot hope to realize the human right to housing in Canada if we continue to actively support Israel as it violates that very same human right.

It is beyond time for the Canadian government to show clear and meaningful support for, and solidarity with, our Palestinian counterparts in East Jerusalem. In doing so, we can finally move beyond paying lip service to reconciliation and human rights and pave the way for humane politics both at home and abroad.

Seema Kawar is a human rights lawyer based in Toronto, with Jordanian and Palestinian roots.

Sahar Raza is the Communications and Research Coordinator for the National Right to Housing Network and a social justice advocate committed to promoting human rights and equity in her community.