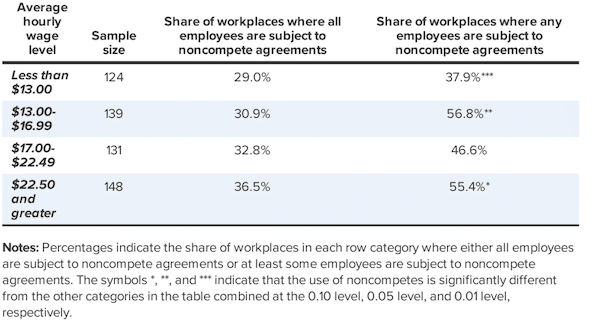 According to an Economic Policy Institute report, between 28 and 47 percent of U.S. private sector workers are subject to noncompete agreements. In brief, noncompete agreements (or noncompetes) are provisions in an employment contract that ban workers from leaving their job to work for a “competitor” that operates in the same geographic area, for a given period of time. In a way, it’s an attempt to recreate the power dynamics of the employer-dominated company towns of old—with workers unable to change employers if they want to continuing working in the same industry.

It is not just top executives that are forced to accept a noncompete agreement. Companies also use them to restrict the employment freedom of many low wage workers, including janitors, security guards, fast food workers, warehouse workers, personal care aids, and room cleaners.  In fact, the Economic Policy Institute estimates that almost a third of all businesses require that all of their workers sign noncompetes, regardless of their job duties or pay.

As for the impact of these agreements, a number of studies have found that noncompetes lower wages for all workers in the industry, even those not subject to noncompetes. And then there is this from CBS News:

“In the context of the pandemic, which caused millions of people to be laid off, it’s safe to say at least a share of those workers are constrained [by noncompetes] in pursuing other opportunities during this crisis,” said John Lettieri, head of the Economic Innovation Group, a think tank that advocates against noncompetes.

Indeed, at least four employers–including an accounting firm and a real estate brokerage–have tried to enforce noncompetes against workers they’ve laid off, with the lawsuits making their way through the courts.

On July 9, 2021 President Biden signed an executive order on “Promoting Competition in the American Economy” that, among other things, calls upon the Chair of the Federal Trade Commission (FTC) to work “with the rest of the Commission to exercise the FTC’s statutory rulemaking authority under the Federal Trade Commission Act to curtail the unfair use of non-compete clauses and other clauses or agreements that may unfairly limit worker mobility.” While it seems likely that the FTC will take some action, the scope of that action remains uncertain.

Noncompetes and their use

There are no federal rules governing the use of noncompetes. It is up to the states to decide how to regulate their use. California, North Dakota, and Oklahoma are the only states with outright bans on their use; Washington DC also outlaws them. Several states have placed limits on the use of non-competition agreements. Illinois, Maryland, Nevada, Oregon, and Virginia all prohibit the use of noncompetes with low wage workers. Washington state banned noncompetes for those earning under $100,000. Hawaii has prohibited noncompetes for tech workers only. On the other hand, there are some states, like Idaho, which have actually passed laws making it easier for companies to enforce noncompete agreements.

Popular outrage has sometimes forced companies to change their policies or state authorities to intervene on behalf of workers. An example of the former: in 2015 Amazon began requiring its warehouse workers to sign noncompetes. As The Verge reported:

The work is repetitive and physically demanding and can pay several dollars above minimum wage, yet Amazon is requiring these workers–even seasonal ones–to sign strict and far-reaching noncompete agreements. The Amazon contract, obtained by The Verge, requires employees to promise that they will not work at any company where they “directly or indirectly” support any good or service that competes with those they helped support at Amazon, for a year and a half after their brief stints at Amazon end. Of course, the company’s warehouses are the beating heart of Amazon’s online shopping empire, the extraordinary breadth of which has earned it the title of “the Everything Store,” so Amazon appears to be requiring temp workers to foreswear a sizable portion of the global economy in exchange for a several-months-long hourly warehouse gig.

The company has even required its permanent warehouse workers who get laid off to reaffirm their non-compete contracts as a condition of receiving severance pay.

The company eventually ended the practice after its actions were widely reported in the media, generating bad publicity for the company.

Jimmy John’s offers an example of state action. In 2016, the attorneys general of New York and Illinois, reacting to public anger, forced Jimmy John to stop its franchises from using noncompetes that forbid its employees from working at any other sandwich shop within a 3-mile radius of the franchise for two years.

The cost of noncompetes to workers

When noncompetes are banned, worker pay rises.  One of the most detailed and complete studies of the wage consequences of such a change is based on Oregon’s 2008 decision to ban noncompetes (NCAs) for hourly wage workers. As the authors of the study explain:

We find that banning NCAs for hourly workers increased hourly wages by 2-3% on average. Since only a subset of workers sign NCAs, scaling this estimate by the prevalence of NCA use in the hourly-paid population suggests that the effect on employees actually bound by NCAs may be as great as 14-21%, though the true effect is likely lower due to labor market spillovers onto those not bound by NCAs. While the positive wage effects are found across the age, education and wage distributions, they are stronger for female workers and in occupations where NCAs are more common. The Oregon low-wage NCA ban also improved average occupational status in Oregon, raised job-to-job mobility, and increased the proportion of salaried workers without affecting hours worked.”

Earlier studies of the consequence of changes in the use of noncompetes in other states produced similar results. For example, a study of Hawaii’s 2015 decision to ban noncompetes for tech workers showed a 4.2% pay bump for new hires and a 12% increase in worker mobility.

But even a change in law doesn’t necessarily bring an end to the practice, as highlighted by the California experience. California courts will not enforce a noncompete contract, but that hasn’t stopped many California businesses from including them in their employment contracts. One reason according to worker advocates, as reported by CBS News, is that most workers don’t know that noncompetes are banned in California:

As a result, employers in California use these restrictive contracts just as much as employers elsewhere in the U.S., and they have their desired effect: scaring workers away from leaving for better jobs.

“There’s no disincentive for the employer to include it in the employment contract. The worst thing that would happen is a court would declare [the noncompete] void,” said Harvard’s Gerstein. “There needs to be a disincentive to employer overreach.”

President Biden pledged during his campaign to “eliminate all non-compete agreements, except the very few that are absolutely necessary to protect a narrowly defined category of trade secrets.” On the other hand, his executive order speaks to “curtailing” their use. The best outcome would be an FTC ban on the use of non-competes in all situations and for all workers; noncompetes are just another tool that businesses can use to exploit their workers.

But it may be that the FTC will instead seek to place limits on the use of such agreements, perhaps outlawing their use with low wage workers or establishing federal regulations that restrict their scope and duration. Although such a step would be an improvement over the current situation, where most states do little to restrict the use of noncompetes, it may well result in an unsatisfying patchwork regulatory framework, much like that of our current unemployment system.

No matter how the FTC rules on the use of noncompete agreements, there are two other actions it should take that would significantly strengthen worker rights. Currently, many workers only learn they are subject to a noncompete agreement after they have already accepted a job. The FTC should mandate that employers include any noncompete requirements in all job postings.

And as the California experience shows, companies will continue to use noncompetes even if they are not enforceable, relying on ignorance, intimidation, as well as the financial costs of court proceedings, to get workers to accept their terms. Therefore, the FTC should also allow workers to sue for damages if a business is illegally attempting to enforce a noncompete agreement.

In the meantime, while we await FTC action, the greater the public knowledge about, and voiced opposition to the use of noncompetes, the better.