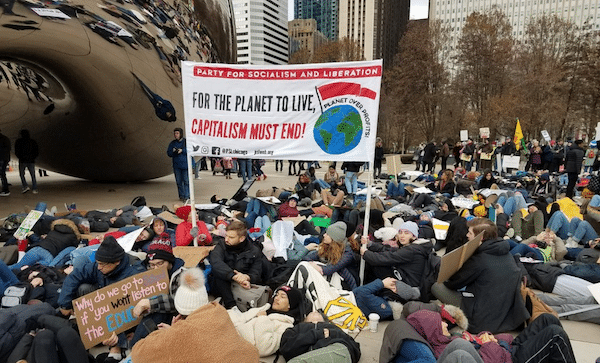 Workers refuse to shoulder the burden for the bosses’ climate crisis

Workers are organizing to fight for their health and wellbeing amid deteriorating environmental conditions caused by climate change. The United Nations issued a “code red for humanity” warning earlier this month with over 3,000 pages of scientific documentation saying that the climate crisis has reached a point where we can expect extreme weather including heat waves, flooding and droughts to happen with more frequency and intensity. The working class and poor are facing the brunt of this.

On August 20, Burger King workers organizing with Fight for 15 in San Jose, California walked out to protest the extreme temperatures inside the restaurant. Rosa Vargas, who helped organize the walk out, says the restaurant’s air conditioning and ventilation is so poor that it is frequently hotter inside the restaurant than outside. At the protest, Vargas spoke about these severe conditions causing her to feel “dizzy and like I am going to faint.” Vargas went on to speak about the serious and dangerous impacts of the temperatures, saying,

I get a headache that feels like my head is being pinched and stuck with needles, and my heart beats rapidly. When it gets hot, I eat ice to prevent myself from vomiting.

Rosa Vargas and her coworkers at Burger King are not the only workers organizing for their health as the climate catastrophe worsens. Nathalie Hrizi, a public school educator in San Francisco, is fighting to protect both her coworkers and students. She says their health is being threatened by toxic air and COVID-19. “Wind patterns will bring a large amount of smoke into our air and it becomes dangerous, particularly for children in sensitive groups,” Hirzi said. She went on to explain,

The district management has relied on open windows as the primary source of ventilation to mitigate the pandemic but now that it is fire season, their recommendation is to close the windows. So we’re essentially being asked to choose between our children being exposed to dangerous levels of smoke in the air or being exposed to higher levels of COVID.

On August 20, Hrizi’s union the United Educators of San Francisco (UESF) launched a campaign to demand quality air purifiers, quality masks, and universal weekly COVID testing. “What we’re fighting for is a reform and a mitigation of a very severe crisis that is caused by the way the capitalist system is organized and that the primary motivation for those who are in power is profit,” Hrizi says.

Unsurprisingly, these wildfires are also causing a major crisis for firefighters. Many are fed up with being asked to fight dangerous super fires in exchange for low pay and substandard healthcare, and many have left the profession because of it. In response to this labor shortage, the Biden administration announced this month that all federal firefighters will be paid at least $15 an hour. Previously, some were being paid as little as $13 an hour.

Outrageously, the government is using prison labor to deal with the firefighter shortage. Programs where prisoners work as firefighters for a few dollars a day exist in nearly every western U.S. state. States have become increasingly dependent on virtually free prisoner labor — essentially a form of slavery. In California, prisoners make up one-third of the state’s entire wildfire fighting personnel.

Farm workers, three out of four of whom are first generation immigrants and many of whom are undocumented, are also facing worsening exploitation because of climate change. Teresa Romero, president of the United Farm Workers (UFW) spoke in July about this exploitation: “Farmworkers are imperiled by a perfect storm of deadly plagues: Extreme summer temperatures fueled by climate change… field workers disproportionately afflicted by the coronavirus… and too many live in daily dread of deportation, afraid to complain about abuse and mistreatment due to their immigration status.” Because these immigrant workers often lack citizenship and legal protections, employers can and do frequently get away with violating labor laws.

This dynamic has led to deplorable conditions for farmworkers. According to the CDC, farm workers are 20 times more likely to die from heat related illness than other workers. The outlook for the future is even worse. A 2020 study by the University of Washington says that for farmworkers “the average number of days spent working in unsafe conditions will double by mid-century, and, without mitigation, triple by the end of it. Increases in rest time and the availability of climate-controlled recovery areas can eliminate this risk but could affect farm productivity, farm worker earnings, and/or labor costs much more than alternative measures. Safeguarding the health and well-being of U.S. crop workers will therefore require systemic change beyond the worker and workplace level.”

Lowering productivity and increasing the cost of labor goes against the most basic tendencies of capitalism. Meeting this challenge will require building a powerful working class movement demanding better conditions and ultimately the demise of a system that puts profit over people’s lives.

Larger-scale and more frequent wildfires, flooding, heat waves and natural disasters caused by climate change are putting the health and safety of the poor and working class in danger. As already inhumane working conditions become exacerbated by the climate crisis, the labor movement is faced with a major battle. However, as this crisis grows so will the movement to address it. From the Burger King workers in San Jose walking out to the teachers demanding quality air purifiers and masks in San Francisco, these detrimental conditions worsened by climate change will not stop workers from organizing for the respect and safety they deserve!