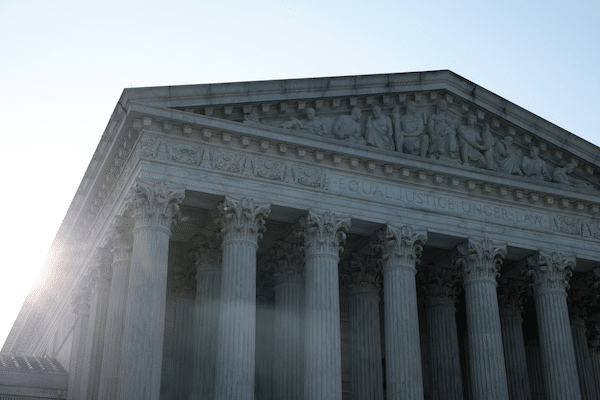 AT 10 P.M. Thursday night, without oral arguments or a full briefing, the Supreme Court ruled to end the federal eviction moratorium. The eight-page order puts hundreds of thousands, if not millions, of tenants at risk of losing their homes as the coronavirus pandemic rages on–almost at the exact moment that federal unemployment benefits are set to expire.

The justices know what is at stake: A Centers for Disease Control study, which was cited in the dissenting justices’ opinion, found that when 27 states lifted their eviction moratoria this past summer, it resulted in 433,700 excess COVID-19 cases and 10,700 excess deaths nationally. The court’s majority nonetheless sided with the economic concerns of landlords.

The Supreme Court’s decision is not a surprise. The CDC’s eviction moratorium was extended last month, but only after Rep. Cori Bush, D-Mo., camped out for four days on the Capitol Hill steps, joined by activists and democratic socialist politicians, successfully pressuring the White House to reinstate the emergency order.

The moratorium extension was a desperate and necessary bid to buy time. The federal government has allocated $45.6 billion for the Emergency Rental Assistance Program, of which state governments–inexcusably–have only distributed around $5 billion to tenants and landlords. Application processes vary nationwide but are consistently convoluted and complicated, as well as often skewed to benefit landlords. The burden should be on those who make money from owning property to recuperate lost rental income from government relief funds; instead, landlord associations have fought to be able to evict struggling tenants. At the very least, an extended moratorium allows some more time for relief money to be distributed before evictions begin en masse.

For those in the struggle for housing as a human right, however, it has long been clear that short-term moratoria on evictions are a Band-aid on the bullet wound of a broader crisis. The crisis predates the pandemic and requires a radical restructuring of how housing works in this country.

It was never sufficient to rely on emergency executive measures, which are vulnerable to legal challenge, to stave off a coming eviction crisis. More than 15 million people in the U.S. live in households that collectively owe as much as $20 billion to their landlords. It is imperative that Congress convene and pass legislation to extend the eviction moratorium and that state legislatures around the country extend or reinstate moratoria, too.

As Bush made clear during her protest, Congress bears much responsibility. As long ago as June, Justice Brett Kavanaugh wrote that “clear and specific congressional authorization (via new legislation)” was required to continue the moratorium. That view was repeated in Thursday night’s ruling. Lawmakers must act–and that will take pressure.

The model for keeping people in their homes, alongside numerous legislative and judicial strategies, already exists. The communities that have enacted rent strikes, set up eviction defense blockades, shut down eviction courts, and occupied vacant properties have shown as much throughout the pandemic. What is needed is direct action.

As KC Tenants, a Kansas City, Missouri-based tenants community organization, noted on Twitter following the Supreme Court decision, “A faulty eviction moratorium wasn’t ever going to save us. We take care of us.” 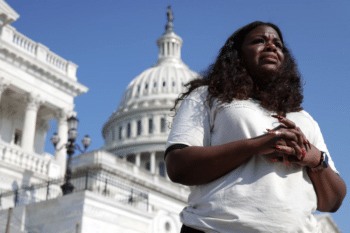 RENT STRIKES HAVE been among the most powerful collective direct actions taken up by tenants in the last year and a half. Before federal and many state eviction moratoria were enacted, tenant organizers orchestrated some of the largest coordinated rent strikes in a century. Even at the start of the pandemic, one-third of renters nationwide–approximately 13.4 million people–had not paid rent, not as a strike action, but simply because they could not.

The shift from “can’t pay” to “won’t pay” as a collective act recognizes that a landlord is not likely to evict a whole building. Rent strikes force property owners to reckon with a united front of tenants prepared to fight for and with each other.

Julia Melgar, a Maryland-based mother of one and member of immigrant rights group CASA, has been on rent strike since last October with dozens of other neighbors in a Prince George County housing complex, owned by publicly traded corporation Arbor Realty Trust.

“We were badly affected by the pandemic,” Melgar told me on a Zoom call from her apartment, explaining that she and her partner both lost work after becoming very sick with COVID-19. “We were suffering.” Melgar began organizing with CASA, attending regular tenant meetings, which led to a rent strike involving over 100 tenants across two adjoining building complexes.

CASA has been organizing with the striking tenants, the majority of whom have immigration backgrounds from Central America, to support the rent strike and to sue Arbor for what the group calls “premeditated neglect” amounting to racial discrimination. Melgar told me that in 16 years of living in her apartment, the building management company “never does maintenance,” and tenants are forced to pay for repairs themselves. The purpose of the rent strike has not been simply to survive pandemic hardships until government aid arrives, but also to build collective power to challenge Arbor’s slumlord-like treatment.

“When we come together, and together with the organization”–CASA–“there is power to pressure the landlord,” Melgar said. She said that although she has personally been able to receive federal rental assistance money and one month’s rent relief, she continues to take part in the rent strike and will do so until her neighbors have also accessed the funds they need to avoid eviction. “We continue the rent strike, because not everyone is okay,” she said.

As the eviction moratorium ends, striking tenants acting together are in a far stronger position to battle eviction proceedings and ensure that landlords seek federal relief before summarily pushing people from their homes.

The imbalance in a landlord-tenant relationship is irreducible–even when it comes to owners of just one property. Tenant organizations and unions go some way to mitigate these inherently unjust property relations. Rent strikers are a small percentage of the millions of tenants who simply cannot pay rent, but the pandemic has nonetheless seen an unprecedented rise in tenants engaging in collective resistance. 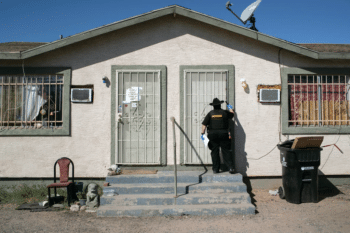 IN RESPONSE TO the Capitol Hill protest started by Bush, dozens of Twitter users posted in celebration, citing the famed labor organizing slogan “Direct action gets the goods.”

The courageous member of Congress, herself formerly unhoused, did what Capitol Hill politicians so rarely do: She and her allies put their bodies on the line, pushing on the indifferent gears of a government that was willing to let millions of people face eviction in a pandemic, while Congress took a recess.

It is important, however, to differentiate a powerful act of symbolic protest–like Bush’s–from direct action. The former functions primarily to put pressure on a given authority to “get the goods” (as Bush did); direct action, meanwhile, “gets the goods,” well, directly.

An eviction defense, in which community members physically block marshals from removing tenants from their home–actions often taken at landlords’ behests long before a tenant’s legal options have been exhausted–is a direct action. And against the intolerable fact that 17 million homes remain vacant in the U.S., while over half a million people are unhoused, and many more are precariously housed, the direct actions of reclaiming empty properties deserve unqualified support.

Last year, Martha Escudero and her two daughters became the first of a dozen unhoused families to occupy one of over 100 vacant houses in the El Sereno neighborhood of Los Angeles. Organizing under the banner of “Reclaiming Our Homes,” the organizers were in part inspired by Moms 4 Housing, a group of Oakland-based unhoused and marginally housed activists who occupied a long-vacant home. Theirs was a life-affirming intervention against gentrification and speculative housing, proving all the more crucial as the pandemic swept the country.

“People are desperate and see how the government is failing them,” Escudero told me. “They’re taking power into their own hands.” The reclaimed El Sereno houses were owned by the California Department of Transportation, which had left them abandoned and neglected. It was only when reclaimers occupied the properties directly that the government agency moved to fix up the houses and negotiate with the reclaimers.

The Moms 4 Housing building in Oakland has now been converted into transitional housing for women and children under community land trust ownership. Escudero’s reclaimed house, too, has been designated as transitional housing; she and her fellow reclaimers are now fighting to see their homes recognized as permanent housing owned in a community land trust. “Temporary housing should be abolished,” Escudero told me.

“In general, there needs to be more direct action,” she said.

Politicians not engaging in the gravity of the situation are failing on a grand level. 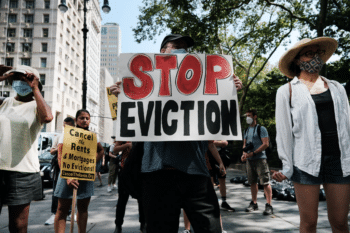 “THE THREAT OF eviction is terrifying lots of people, but from that fear, people are ready to fight,” said Joel Feingold, a member of the Crown Heights Tenant Union in New York City.

The Crown Heights Tenant Union was founded in 2013 with the aim of protecting its namesake Brooklyn neighborhood from devastation due to accelerating gentrification. Before and throughout the pandemic, it has assisted numerous buildings in organizing rent strikes, accessing rental assistance, connecting tenants to legal support, and demanding more expansive change than pandemic rental assistance.

Abolitionist in scope, the tenants’ union seeks to see rent canceled rather than covered and, as Feingold told me, to “permanently abolish evictions of seniors, disabled people, children and working-class New Yorkers in general.”

Such aims might sound lofty given the sheer power and wealth of corporate real estate, which has only expanded in the pandemic, accounting for around half of all rental unit ownership in the country. Yet the economic and health crisis has only further revealed the unsustainability for so many lives in a housing system driven by market interests and profit. It’s not an assurance of victory, but certainly a precondition for it, that many thousands more people, along with a number of political leaders on the left, are willing to fight for radically different approaches to housing.

In 2019, Rep. Ilhan Omar, D-Minn., introduced the Homes for All Act, to make public housing a mandatory part of the federal budget, just like Medicare and Social Security, and to authorize the building of millions of public housing units aligned with a Green New Deal vision of sustainable living. This sort of long-term policy vision is necessary and laudable, but unhoused people, partially housed people, and tenants soon facing eviction cannot wait on our sclerotic government to ensure safe homes for all. In the bipartisan infrastructure bill set to pass the Senate, zero dollars are committed to housing, although the Democrats’ reconciliation bill could include billions for housing-related spending.

“The government knows this will worsen. Starving and removing people for real estate interests is what this country, and capitalism, does,” the Pittsburgh Union of Regional Renters, which works to build tenant power, told me in an emailed statement. When it comes to relying on the state and our existing systems to provide safe housing, the tenants union was clear:

We’re not holding our breath. Who can afford to?