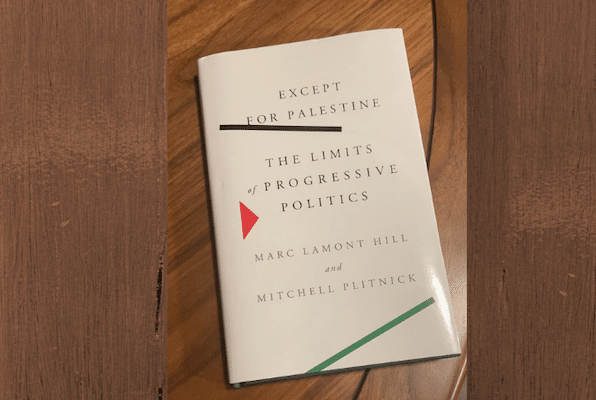 Except for Palestine: The Limits of Progressive Politics, by Marc Lamont Hill and Mitchell Plitnick. (Book Cover)

(Except for Palestine: The Limits of Progressive Politics. Marc Lamont Hill and Mitchell Plitnick. The New Press, New York.  2021.)

“Except for Palestine” is a remarkable little book. Within it, the authors Hill and Plitnick present the larger picture that the self-proclaimed progressive “universal” values of the United States are argued for in many troubled spots of the world, except for Palestine. Their introduction lays out this idea,

The conditions mentioned here should be profoundly disturbing to American liberals and progressives, as they are clearly out of step with the values they claim to hold most dear.

For the following chapters, “we examine Israel’s escalating authoritarianism and how U.S. policy has enabled it, and we demonstrate how it is anathema to universal liberal values.” There are four chapters each covering a distinct topic, and each succeeding strongly in supporting the authors’ perspective.

The Right to Exist

The first chapter, “The Right to Exist” presents the ongoing Israeli position that the Palestinians must recognize Israel’s right to exist before other negotiations begin. This demand is made of no other countries, and no other countries make the demand of any other country. Countries exist through recognition of their governance and boundaries, not by right. There is no similar ‘given’ by the Israelis that Palestine has a right to exist, and under international law it is not a requirement for sovereignty.

Yet international law does include the right of return, a law Israel simply ignores. The Israeli position comes from two sources: right of return implies the recognition that they are an occupying colonial-settler state; and it is acknowledged that the current demographic Jewish majority, slim as it is, would be overwhelmed by refugees returning to their homeland.

As for American progressive values, the demand for recognition “is a demand rooted in a “might makes right” ethos that demands the utter subjugation, even humiliation, of one’s rivals.”

The second chapter, “Criminalizing BDS” discusses arguments made concerning the supposed anti-semetic nature of its demands, but as presented here, it is a basic non-violent expression of civil rights. For the U.S. and its own internal arguments,

The Supreme Court has generally interpreted refusals to do business, including through boycotts, as conduct that may be permissibly regulated…. when the motivation is political or social in nature, may have more of an expressive element, which according to Supreme Court Precedent, could qualify for First Amendment protection.

The BDS movement is not organized by the PLO/PA governance currently in place over the Palestinain people. The BDS national committee has an explicit statement concerning anti-racism and non-violence which is “an unambiguous refutation of any association with violence or anti-semitism.”

In summarizing their arguments, the authors say “While Israel should never be unfairly isolated or targetted, it also cannot be shielded from principled and organized political pressure through boycotts, divestments, and sanctions. These tactics have always been critical tools for producing peace, freedom, and justice for the vulnerable. Palestine cannot be an exception.”

The four years of Trump’s governance made several important concessions to Israel and created the situation in which the U.S. “could no longer function as a mediator of the conflict, and diplomacy, already barely existent, went completely dark.”

Trump’s recognition of the Golan Heights as Israeli territory, and the transfer of the U.S. embassy to Jerusalem were the two main actions invalidating any supposed mediating role. Mostly unrecognized was his decision to cut off aid to UNRWA (the United Nations Relief and Works Agency set up to aid Palestinian refugees), and while generally unrecognized, it carries significant importance in consideration of international law and the desires of the Israeli state.

The UNRWA was set up to aid refugees, to provide social services and neither to settle them nor define who they are. UNRWA’s role is “to provide basic services… not to resettle the refugees.” The UNHCR (the UN High Commission for Refugees) does have the mandate to help refugees settle in areas other than their homes. With Trump defunding the UNRWA the Israeli hopes are to have the Palestinian refugees settled in the countries where they currently are. On the other hand if the funding is stopped Israel could “face a humanitarian crisis that could turn world opinion sharply against the country.”

Once again, the demographic factor comes into play–with the refugees settled outside Israel a very large portion of them would then stand outside the right of return. The Palestinians steadfastly refuse this, many holding the keys to their homes (whether demolished or occupied) and maintaining their international law right of return to a militarily occupied area.

It is international law that defines refugee status and “conveys refugee status to children of other refugee populations until permanent homes can be found.” This status has been conveyed in other instances–Afghanistan, Bhutan, Burma, and Somalia.

Trump himself “possesses a dangerous combination of ignorance of the issues he was faced with and complete indifference to that ignorance.” His policies however were not anomalous. He essentially acted on policies already in place, endorsed but not activated. Part of the reason was for future potential concessions for a peace deal with Syria or negotiations for the now-dead two-state solution. He did not “Write a whole new act in the play… but [stripped] the mask off the United States.” Rather than belonging to Trump these situations highlight “some of our most entrenched and dangerous progressive contradictions.” Trump was a “dangerous extension, not the source, of deeply rooted bipartisan policies… [positioning] Palestine as an exception to which core liberal American values are not applied.”

The Crisis in Gaza

The final chapter, “The Crisis in Gaza” is an excellent overview of the history of events in Gaza through its many encounters with the Israeli state (and Egypt) since the Nakba. Although Gaza “constitutes one of the most pressing humanitarian crises in the world”, they are pretty much the exception where the liberal progressives do not want to intervene [not that U.S. interventions ever do any good]. While liberal hearts “bleed” for Syrians, Afghans, Libyans et al, they do not for Palestinians.

As an open-air prison fully controlled by Israel “forms the basis for the widely held position that Gaza remains under Israeli occupation to this day.” As for the U.S., they have not “merely been indifferent… but played an active, significant, and thoroughly bipartisan role in degrading the conditions.” For Gaza, “Americans share significantly in the blame… Our overwhelming silence is a betrayal of the noble, definitive ideals that liberals and progressives profess to hold dear.”

In their conclusions, Hill and Plitnick note that “support for Palestinain rights is no longer a fringe position.” Ironically, some of this is due to the hasbara attempts by Israel to counter the BDS information and to counter arguments about Palestinian rights to self defense under international laws on occupation. As a side bar for Canada, a large majority of Canadians–including a majority of Conservatives–now support ICC investigations of war crimes–while all official parties still support the defunct two state solution.

The “self titled progressives..contradict their beliefs by justifying or ignoring behavior by Israel that they oppose or at least treat gravely when it is at the hands of other state actors.” So-called progressives need to recognize that Palestinians “are entitled to the same rights to freedom, justice, equality, safety, and self-determination as everyone else around the world.”

The first three chapters are mostly contemporary, while the final chapter on Gaza is a concise, clear account of Gaza’s history and why it is today such an important denial of all that progressives and liberals claim to be. This is an excellent short read to gain an understanding of current events in Israel/Palestine. The language is clear, the examples are few but very pertinent, and the footnotes are extensive and a good part of the read for more information. “Except for Palestine” should be read by anyone interested in events in Israel/Palestine–and obviously in particular, anyone claiming to be progressive and liberal.

Jim Miles is a Canadian educator and a regular contributor/columnist of opinion pieces and book reviews to Palestine Chronicles. His interest in this topic stems originally from an environmental perspective, which encompasses the militarization and economic subjugation of the global community and its commodification by corporate governance and by the American government.