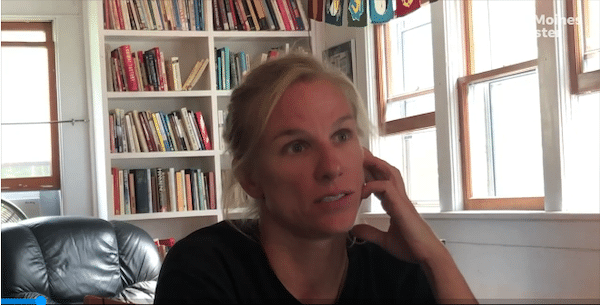 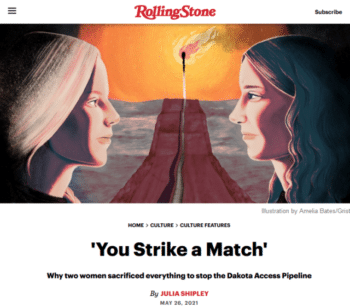 Jessica Reznicek (Rolling Stone, 5/26/21): “Property destruction, or as I prefer to call it, property improvement, is the only solution I foresee.”

Floods, fires, ice caps melting, hurricanes—all attest to the violence of human-caused climate disruption. It’s undeniable and undeniably fatal, and the only question for historians will be not what mysterious “factors” prevented humans from responding, but which political structures prevented the humans that wanted to respond meaningfully from doing so. When those books are written, at least a chapter will be devoted to cases like that of Jessica Reznicek, the activist now facing eight years in federal prison for damaging equipment at the Dakota Access Pipeline in Iowa.

In 2016, Reznicek, with fellow activist Ruby Montoya, set fire to heavy machinery, delaying construction for weeks on the pipeline that would move a half-million barrels of crude oil a day under the Missouri River and Lake Oahe, the reservoir that is the primary water source for the Standing Rock Reservation. Listeners will know of longstanding protests against the threats pipelines like Dakota Access present for water, land and communities—as well as the global climate. The pipeline violates Indigenous sovereignty and treaty rights, and contributes to the crisis of missing and murdered indigenous women, exacerbated by the so-called “man camps” set up near pipeline projects.

Reznicek’s sentence was doubled by the labeling of her property damage as “terrorism,” and the Des Moines Register (7/22/21) contrasts her eight years to the three years and change given to an Iowa man who defrauded the government of more than $1.3 million in federal loans intended for Covid relief.

Years from now, corporate media may note that Reznicek’s imprisonment came the same week the UN’s Intergovernmental Panel on Climate Change issued a new report that the planet faces climate catastrophe unless drastic efforts are made to reduce greenhouse gases. They will probably not note their own complicity in reporting on pipelines like Dakota Access as “controversial,” while silently abiding that only one side of the controversy is labeled “terrorist” and goes to prison.