The document compiles Douhan’s complete assessment of her 12-day visit to the Caribbean country in February. Presenting the findings at the 48th UN Human Rights Council session on September 15, the independent expert reiterated that the wide-reaching sanctions program against Venezuela has had a “devastating” effect on the entire population’s living conditions.

Douhan went on to explain that Venezuela’s pre-existing economic and social crisis was exacerbated by the imposition of “sectoral sanctions on the oil, gold and mining industries” as well as “the economic blockade and the freezing of the Central Bank assets.”

The Belarusian lawyer added that the threat of extraterritorial and secondary sanctions has led to “over-compliance by banks and third-country companies,” amplifying the negative impact of primary sanctions. Furthermore, she argued that the “humanitarian exemptions appear to be ineffective and insufficient” to alleviate the crisis.

The special rapporteur concluded that unilateral sanctions against Venezuela are politically motivated, undermine the most fundamental human rights and violate international law. She urged the U.S. and its allies to lift all coercive measures.

The Special Rapporteur made it clear that these measures, in the form of collective punishment, are international crimes that threaten the Venezuelan people.

Venezuela has been under crushing U.S. sanctions since 2017 when Washington targeted state oil company PDVSA. Between 2019-2020, the U.S. Treasury Department imposed an oil embargo, a blanket ban on all dealings with Caracas, and shut down fuel and diluent imports and swap deals. Additionally, Washington levied secondary sanctions and a host of other measures, including freezing or seizing a number of Venezuelan assets abroad. 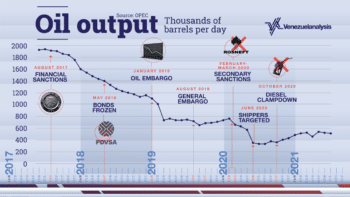 Oil output fell to historic lows in the second half of 2020.

Right to food and wages

In her report, the UN independent expert emphasized that “the drop of oil revenues, exacerbated by the sanctions, provoked a food and nutrition crisis,” with food availability decreasing by an estimated 73 percent as imports fell between 2015 and 2019.

As a result, more than 2.5 million Venezuelans are severely food insecure, while the Food and Agriculture Organization (FAO) recorded a “213.8 percent increase in undernourishment or chronic hunger.”

Douhan’s report also warned of “the precarious purchasing power of workers,” with the average salary estimated at U.S. $2-10 per month covering around 2 percent of the food basket.

However, the special rapporteur acknowledged the government’s efforts to alleviate the crisis with a range of social benefits, including the distribution of subsidized food through the CLAP program. The latter reportedly assists 7.5 million households but has reduced its staples after imports were targeted by the U.S. Treasury Department.

The Belarusian lawyer stated that sanctions have blocked transactions aimed at acquiring medicine.

This prevented the purchase of blood reagents in 2020 for 2.5 million patients and 123,000 others in need of blood transfusions, according to the Ombudsman’s Office.

The insufficiency of basic medicines and their rising prices have likewise placed some 300,000 people at risk. At the same time, 2.6 million children have been deprived of vaccines for meningitis, rotavirus, malaria, measles, yellow fever and influenza.

Other concerns are the increase of teenage pregnancies and HIV/AIDS cases. Currently, 80,000 out of an estimated 120,000 HIV/AIDS patients had to suspend their treatment for lack of drugs, the report expressed.

Additionally, hospitals reported that only 20 percent of the equipment is functioning due to the inability to acquire spare parts. The UN expert documented two specific cases: The Children’s Heart Hospital did fewer than 120 surgeries in 2020 (the standard was around 1800), and the J.M. de Los Ríos Paediatric Hospital in Caracas had to suspend kidney transplants for 137 children.

Douhan’s findings likewise highlighted that Washington’s seizure of PDVSA’s US-based oil subsidiary CITGO halted the company’s humanitarian program. As a result, 14 children have died after not receiving liver, kidney and bone marrow transplants in hospitals abroad. Another 53 are awaiting the resumption of the state-funded Simón Bolívar foundation.

During her visit to Venezuela, Douhan attested that all public services are working at half of their capacity since the US-led imposition of coercive measures.

According to Venezuelan government officials cited in the report, only 50 percent of the water system’s distribution units were running and “water had to be distributed in rotation to ensure delivery to all.” The use of chemical agents to treat and purify water was reduced by 30 percent, causing health problems.

The text went on to explain that Venezuela is producing “only 40 percent of the electricity it needs, and electric lines work at less than 20 percent of their capacity.” In the country’s southwest region, “75-80 percent of electricity could not be produced because thermo-power machines were damaged and needed to be repaired.” The situation was aggravated by alleged cyber-attacks against the electrical grid in 2019.

The special rapporteur concluded that the Caribbean nation was on the brink of a “catastrophic situation” due to acute fuel shortages.

At the same time, gasoline shortages have resulted in higher transportation prices, blocked access to hospitals and schools, and aggravated food and medical supplies distribution, especially to the country’s remote areas.

The government’s limited financial resources to buy and repair necessary infrastructure has led to shrinking Internet coverage, with reportedly only 10 percent of the territory accessing the service. In the pre-sanctions era, the range stood at 50-90 percent.

The Belarusian lawyer’s report likewise pointed that the higher costs of Internet access and ongoing power shortages have affected online teaching since the breakout of the COVID-19 pandemic. According to university researchers, an estimated 80 percent of students in public schools cannot overcome these obstacles.

Another consequence of the sanctions was the suspension of the government’s Canaima program in 2020, which produced and distributed 6,5 million tablet computers to 14 million students.

The tightening of sanctions has led to unprecedented migration numbers. The UN expert report, citing a host of sources (including the Venezuelan government), placed the figure between 1.2 to 5.6 million by May 2021.

The accelerated migration caused a brain drain, with most state companies and public services losing 30-50 percent of their personnel, including “doctors, nurses, teachers, university professors, engineers, police officers, judges, technicians and many others.” This resulted “in internal disorganization, increased workloads for remaining staff, reduced services and a decline in their quality.”

Special Rapporteur Alena Douhan’s visit to Venezuela is the first out of ten scheduled for the next two years as part of an agreement between the Nicolás Maduro government and the UN High Commissioner for Human Rights signed in 2019.

The full text of Douhan’s report can be found here.