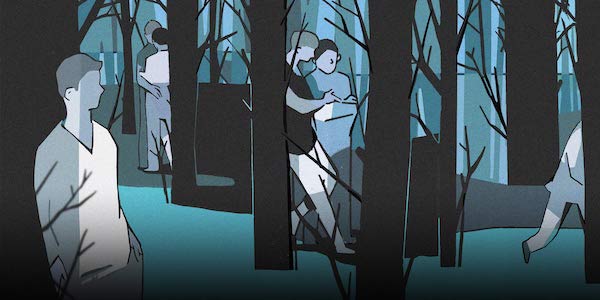 Get your free lubricant and condoms!

It was a Saturday night in Garden Park, the most popular gay cruising spot in a South China industrial zone, and the place was packed. Hundreds of gay men, most of them migrants, sat chitchatting in circles or wandering the bushes looking for potential sexual partners. At the same time, five volunteers made the circuit of the park grounds, offering contraceptives and talking to those assembled about where they could get tested for HIV.

“I don’t need any,” one cruiser complained.

My ‘doors’ have been closed for months.

“Take them anyway,” replied the volunteer in a well-practiced tone.

Maybe they’ll come in handy tonight. Never go without one!

The volunteers there that night knew their business well. Their grassroots HIV/AIDS testing and prevention organization–funded by the local Center for Disease Control–is the only LGBT-focused group in the entire industrial zone.

In China, HIV/AIDS prevention initiatives targeting the country’s MSM population date back to the early 1990s, when rising HIV infection rates caught the state’s attention and pushed it to take action. In a bid to reach marginalized communities, state-affiliated health workers partnered with LGBT Chinese to raise awareness and pass out prophylactics. This arrangement marked the starting point of gay organizing in urban China by helping provide the resources and opportunities needed to unify the community and set the stage for later fights against homophobia and HIV-related discrimination.

Hundreds of grassroots LGBT organizations received their first funds from HIV/AIDS prevention projects in the late 1990s. Some of these groups were established by health professionals and academics who then recruited gay men from the community to conduct outreach. Others were support groups started by HIV-positive gay men that gradually expanded their remit to encompass a broader range of LGBT issues.

In the days before dating apps and high-end gay bars, cruising spots like Garden Park were the key areas for reaching out to the gay community and educating urban gays about safe sex. That is no longer the case. The past decade has seen well-off gays retreat from the public sphere in favor of online dating and more consumerist venues. Meanwhile, as unprotected sex between young adults and teenagers became a growing contributor to HIV transmission among these demographics, the government and media shifted their focus to sex education at schools and colleges.

“If you watch the news, you see many reports on increasing numbers of college students getting infected with HIV through male-to-male sex,” one health worker told me.

Gay migrants never make the headlines, but they are actually in a worse situation and much less informed about HIV/AIDS prevention.

Multiple self-identified gay health workers told me that the local infection rate–the number of infections divided by the number of people being tested–in industrial suburbs is significantly higher than in urban centers. Their comments hint at the magnitude of the challenge:

They don’t use condoms and lubricant–they just spit.

A guy died just a month after he tested positive. If we could have tested him earlier, he would still be alive.

In short, while society’s attention may have shifted elsewhere, gay migrants continue to be in dire need of reliable information regarding HIV/AIDS and safe sex. That is where the remaining grassroots organizations come in. Often led by migrants or former migrants, they perform the vital work of reaching out to the working class MSM community in places like Garden Park. They organize outreach activities, pass out free condoms and lubricants, and publicize testing services. The goal is not simply to get condoms into the hands of those who need them but to build a culture conducive to practicing safe sex. “Every time we give out a condom, we are initiating a dialogue to show them that you should protect yourself and others by engaging only in safe sex,” one volunteer told me.

One of the most common techniques grassroots organizations use to spread this information is peer education. With the exception of the occasional contract worker, these organizations run on the labor of volunteers from within the gay migrant community. “I was recruited to the group the first time I came to this park. I didn’t know anyone here, but they (the volunteers who recruited me) were really friendly and gave me a lot of condoms,” one volunteer said.

The advantage of this approach is that volunteers, by virtue of being part of the local gay community, know what outreach techniques work best. A lack of resources always limits weekly education work, but once informed, gay migrants can influence their peers and gradually raise awareness within the whole community. To amplify their message, organizations put on free karaoke parties, movie nights, and drag pageants, with a table by the door offering free HIV testing. Those who sign up can get reimbursed for their transportation. Some events even offer a reward of 50 yuan ($7.75) for those who get tested, with the results passed out after the party. Such events are particularly effective at mobilizing gay migrant workers because they rarely have the money to enjoy leisure activities.

Businesses targeting gay migrant workers are also keen to work with HIV/AIDS prevention organizations. One example is so-called family clubs–underground bathhouses hidden in urban villages where gays can go to chat, play mahjong, and have sex in exchange for a low entrance fee. Family club owners often actively seek out HIV/AIDS prevention organizations, offering to work with them in exchange for a supply of free condoms.

For some club owners short on resources and budgets, cohosting special events with HIV/AIDS prevention organizations can even be a form of guerilla marketing. The owners agree to host popular activities like drag shows or singing competitions at the venue, and volunteers help spread the event information through WeChat groups dedicated to the local gay community. Attendees who get tested are reimbursed for the price of their ticket and given a prize, such as condoms, sex toys, or underwear.

As for the volunteers themselves, joining an LGBT group or HIV/AIDS prevention group is one of the few opportunities for them to empower and organize themselves. “Nobody cares about us in the city,” one migrant volunteer told me.

I used to feel worthless. I worked like a machine, and after work, all I did was play mobile games. But joining the group feels great. It feels meaningful to help others.

Of course, this grassroots approach to HIV/AIDS prevention has its limitations: not least a lack of funds and public support. Full-time gay health workers survive on a meager salary of 1,500 to 3,000 yuan per month; the volunteers aren’t paid at all. According to one worker I interviewed, their organization has only one funded project, which requires them to do 1,500 tests with a budget of just 70,000 yuan per year.

These problems are worse elsewhere in China, particularly in industrial towns and villages in the country’s less-developed interior, where HIV/AIDS prevention resources are practically nonexistent. Given the stakes, it may be time to recognize the unheralded but highly effective work being done by gay migrant workers to protect their communities and give them the funds and support they need to save lives.