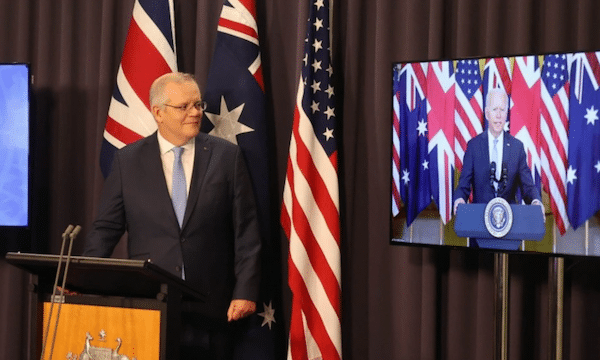 We are witnessing an aggressive build-up by the U.S. and its allies for a confrontation with China. The Biden administration is making massive upgrades to the US’s military capacity, and sharply reorienting it to focus on China. At the same time, the U.S. is waging a propaganda war against China and attempting to rally its allies, including the so-called Quad countries of India, Japan and Australia, to form an anti-China bloc. The Australian government has made it crystal clear over recent years that it is very much on board with this U.S. project.

Australia isn’t being dragged along unwillingly by the US. The Australian authorities have been urging the U.S. on. They are delighted by Biden’s approach, seeing him as much more serious and resolute than the erratic Donald Trump. This orientation is not the result of some sort of colonial cringe or hangover by the Australian establishment. Far from it. The Australian military and foreign policy establishment have made a calculated assessment that the imperialist interests of the Australian ruling class will be best served by a wholehearted commitment to the U.S. side in any showdown with China.

This is precisely what the new AUKUS alliance between Australia, the United Kingdom and the U.S. is all about. AUKUS is in not a defensive alliance in any sense. There is no threat of a Chinese attack, let alone a successful invasion of the Australian mainland, any time in the foreseeable future. The Chinese simply do not have that sort of capability now, and will not at any time in the next couple of decades.

No, AUKUS is not about “defending” the mass of the Australian population from being conquered by invading Chinese troops. It is an aggressive alliance, beating the drums of war to maintain U.S. imperialist domination of the Indo-Pacific region.

The agreement for Australia to use US/British technology to build a fleet of nuclear-powered attack submarines is the initial step in this new alliance. Defence Minister Peter Dutton has flagged that he would welcome more U.S. troops, warships and first strike military aircraft being stationed on Australian soil.

The new, highly sophisticated submarines will be Australia’s most expensive military expenditure of all time. At more than 7,000 tonnes, they are more than twice the size of Australia’s current Collins class submarines and have a greater operational capacity. They are being built for entirely aggressive purposes. These submarines need to be highly sophisticated, and consequently massively expensive, because their role will be to operate for long periods of time in cahoots with the U.S. Navy off the coast of China, 5,000 km from Australia.

Workers will have to pay the cost of these incredibly expensive nuclear-powered submarines—well over $100 billion to build just six of them, and another $145 billion in maintenance costs over their lifetime. Australia’s military spending has been escalating more rapidly than most other elements of government expenditure for some years. Australia currently has the ninth largest military spending per head of population in the world. Now it will increase even further. As Scott Morrison stated: “Australia’s defence spending, as a share of GDP, will continue to increase because it is not just about submarines. This is about a whole range of other capabilities”.

According to the Parliamentary Budget Office, Australian military spending is set to climb by 68 percent to reach $75.7 billion per year early next decade. By 2030-31 it will account for $9 of every $100 of budget spending. At the same time, federal Treasurer Josh Frydenberg is foreshadowing slashing vital areas of government spending, such as education and social welfare, to rein in the mounting debt from the COVID-related expenditures and economic slowdown.

It won’t be the banks and the incredibly profitable mining companies and the growing class of billionaires that are going to bear the burden of this military build-up. The Liberal government is yet again cutting corporate tax rates and taxes on the top income earners. It will be the average working-class taxpayer who has to foot the bill. Meanwhile, the IMF is urging the government to further raise the rate of the highly regressive GST, a move that would further burden working-class people with financing the political priorities of the ruling class.

In any coming war with China, it will also be working-class people who are the main casualties. Any serious war with China, even one waged with conventional weapons, will lead to a horrendous level of deaths.

If the fighting turned into a nuclear war, which is a real risk given that both the U.S. and China would have so much at stake, tens of millions might die. This is the reckless road that the Morrison government is leading us down.

Disgracefully, Labor has backed the AUKUS alliance and the purchase of the fleet of nuclear-powered submarines. This should come as no great surprise, as Labor has long championed the interests of Australian imperialism and increased military spending. It was the Rudd Labor government, after all, that drew up the initial plan for a new submarine fleet.

There needs to be concerted resistance built over the coming years to this relentless military escalation and the sharpening of imperialist tensions. This war drive needs to be stopped in its tracks. The alternative for workers in Australia, the U.S. and China is too catastrophic to contemplate.