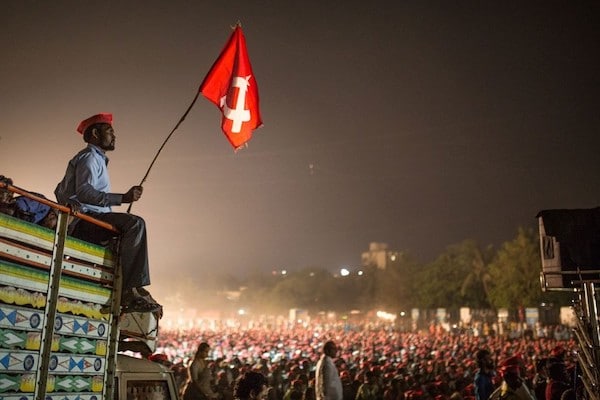 MARXIST theory develops with changing times, as capitalism itself develops, which is why it remains a living doctrine. On the question of the role of the peasantry in the revolutionary process that leads to the transcendence of capitalism, there have been significant developments in Marxist theory, which I propose to discuss here.

Even though Friedrich Engels in The Peasant War in Germany had already underscored the fact that the proletariat had to enter into an alliance with sections of the peasantry and agricultural labourers in its struggle for a revolutionary overthrow of capitalism, Marxist theory had for long still remained unclear about the role of the peasantry in the revolution. In fact Nadezhda Krupskaya tells us that Karl Kautsky, the chief theorist of the Second International and defender of revolutionary Marxism against Eduard Bernstein’s “revisionism”, had believed that the “urban revolutionary movement should remain neutral on the question of the relations between the peasantry and the landowners.” She adds: “Kautsky’s assertion troubled and grieved Illych, and he even tried to excuse him, saying that it was perhaps true for Western European relations, but that the Russian revolution could only be victorious with the support of the peasantry” (Memories of Lenin, Panther History Paperback, 1970, pp.110-111).

Lenin himself picked up from Engels’s argument and developed what was to become the basic Marxist position for the next century. His argument went as follows. In countries that came late to capitalism, the bourgeoisie, facing already the proletarian challenge, made common cause with the feudal landlords out of fear that any attack on feudal property could rebound into an attack on bourgeois property. Hence, instead of dealing the deathly blows against feudal property as it had done in an earlier epoch, when it had led the bourgeois revolution as in 1789 in France, it shrank from redistributing the ownership of feudal estates among the peasants and attacking the social power of the feudal lords, because of which the democratic aspirations of the peasantry remained unfulfilled. These aspirations can be fulfilled only by the proletariat leading the democratic revolution, for which it can enlist the peasants as an ally.

This understanding which represented a remarkable development of Marxism, was to inform revolutionary movements all over the third world for the next century. The developments occurring in capitalism since Lenin’s time however have strengthened the importance of Lenin’s analysis and the need for the worker-peasant alliance, though for reasons that are additional to those adduced by Lenin.

Two developments in particular have been pertinent here. First, with the ascendancy of international finance capital and the ushering in of neo-liberal policies under its hegemony, the way has been cleared for the encroachment by domestic monopoly capital and international big business into peasant agriculture. The peasantry in short faces today not only the oppression of the landlord class but also the tyranny of monopoly capital.

Monopoly capital earns super-profits, over and above the normal rate of profit that prevails under free competition capitalism, not just at the expense of the workers (by raising the rate of surplus value), but also at the expense of small capitalists, and petty producers including the peasantry. It does so by turning the “class terms of trade” against peasant agriculture and in favour of monopoly capital; and it does so also through the mediation of the State, through for instance a shift in the direction of fiscal support away from peasant agriculture towards monopoly capitalists. When there is an increase in subsidies and tax-concessions for monopolists that is matched by a reduction in fiscal backing for the peasants through a restraint on support and procurement prices for the peasantry, then that too amounts to monopolists earning super-profits at the expense of the peasants.

But the encroachment of monopoly capital on peasant agriculture takes not just a flow form, i.e., one of redistribution of incomes away from the latter to the former, but also a stock form, i.e., a redistribution of control over assets from the latter to the former. In fact the two forms of encroachment are usually enmeshed with one another, their net result being a decimation of peasant agriculture, with distressed peasants migrating to cities in search of jobs.

This means that even as the distress migration of peasants to cities increases, it swells only the reserve army of labour, which impairs the bargaining position of even the tiny segment of workers that is unionised. And since the reserve army of labour takes the form not of a distinct set of persons who are without jobs, but rather of a sharing of unemployment, so that a given amount of work is divided among a larger number of persons, the net result of the squeeze on peasant agriculture is an absolute worsening of the living conditions of the working population as a whole.

It is in this sense that the struggle of the peasantry that is currently underway in India is of decisive importance. The three laws against which the peasantry is struggling are meant to open up peasant agriculture for encroachment by monopoly capital. Prior to these three laws the Modi government had enacted anti-labour legislation that would undermine workers’ organisation and lead to a rise in the degree of exploitation of workers. The worker-peasant alliance in today’s world therefore is not only because the fight against landlordism that the fulfilment of the peasantry’s democratic aspirations demands can be effected under working class leadership; it is also because the fates of the working class and the peasantry are inextricably linked in the current phase of capitalism, that they are both victims of the assault of international finance capital and its domestic constituent, viz. the domestic monopoly capitalists.

The peasant struggle in India thus is not an ordinary struggle; it is not just a struggle for this or that economic demand which can be resolved through “give-and-take”. It is a struggle that goes to the very core of the current conjuncture. It is a do-or-die battle; it puts the government in a position where it must declare openly whether it stands with the people or with international big business. And if the government stands openly with international big business, as it has been doing until now, then that is a huge blow to democracy in the country.