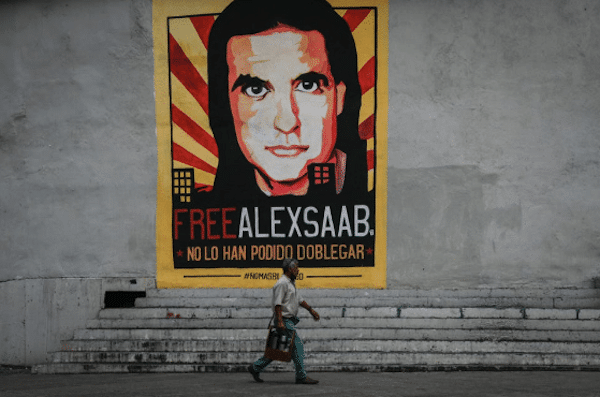 Alex Saab is “the key that unlocks the Venezuelan monetary mystery—that is, how a country facing sanctions from the U.S., the UK and the European Union—is still able to export things like gold and oil… and really the only man who can actually explain how the country [Venezuela] survives today,” according to Forbes.

The U.S. would far prefer to just quietly extradite Saab to Miami, use whatever means necessary to extract sensitive information from him, and then warehouse him in the world’s largest prison system. Forbes uses the euphemism “under pressure” by U.S. prison authorities as the means to force Saab to “shed light on Venezuela’s post-sanction economic network.” Saab already reports that his surrogate captors in Cabo Verde, described below, have unsuccessfully employed torture to try to break his will and induce him to betray Venezuela.

That an elite business magazine such as Forbes is featuring a diplomat from a country aspiring to become socialist is a testament to the growing international movement to free the imprisoned Alex Saab and an indication of the weakness of the U.S. case against him.

The arrest of a diplomat

Saab is fighting what Canadian lawyer John Philpot, an expert on international law, calls “a flagrant attempt of extra-territorial judicial overreach by the U.S..”

On June 12, 2020, Saab was on a mission as a special envoy of the Venezuelan government to procure food, fuel, and medicines from Iran, when his plane from Caracas to Tehran was diverted to Cabo Verde for a fueling stop. Saab’s arrest and subsequent detention at the bidding of the U.S. is arbitrary, illegal, and irregular. Further, Saab has been denied treatment for his cancer condition.

Saab, the deputy Venezuelan ambassador to the African Union, is fighting extradition to the U.S. for the “crime” of trying to procure humanitarian supplies in violation of illegal U.S. sanctions. To date, Saab’s legal appeals to Cabo Verdean authorities for freedom have been either denied, rejected, or ignored.

Under the Vienna Convention, a credentialed diplomat such as Saab has absolute immunity from arrest, even in the time of war. Saab appealed to the U.S. 11th Circuit Court on the basis of his diplomatic status. In response, Washington filed an application for an extension to reply in a legal delaying tactic to allow Saab’s pending extradition without recognizing his diplomatic immunity. It is as if the U.S. empire is claiming the authority to qualify who other countries may choose and receive as their ambassadors.

Consider, however, that the U.S. government still does not recognize the democratically elected Nicolás Maduro as the legitimate president of Venezuela. In contradiction to the United Nations and almost every other country in the world, Joe Biden continues to claim that the Trump-anointed U.S. security asset Juan Guaidó is Venezuela’s “interim” head of state.

The U.S. case against Alex Saab

The U.S. alleges Saab is culpable of fraud and money laundering to bilk the Venezuelan people who are, in fact, under siege by the U.S. Specifically, the U.S. Department of the Treasury’s Office of Foreign Assets Control accuses Saab of “loot[ing] hundreds of millions of dollars from starving Venezuelans.” One would think that Saab would be given a Presidential Medal of Freedom for his efforts, given that the U.S. policy of promoting regime change in Venezuela is doing precisely the same thing as Saab is being accused.

The U.S. and its sycophantic allies have imposed unilateral coercive measures on Venezuela that amount to a blockade through the use of secondary sanctions. The UN has repeatedly called such collective punishment illegal and has demanded their repeal. Some three dozen countries and one third of humanity are suffering under US sanctions.

Largely due to the sanctions, the Venezuelan economy has drastically contracted, especially after the targeting of its oil sector, which is its major source of foreign earnings. Attempts by the Venezuelan government to access its own gold reserves held abroad or to use its drawing rights from the International Monetary Fund to pay for COVID relief have been blocked at the behest of the U.S. government. The Venezuelan oil company subsidiary in the U.S., CITGO, has been appropriated by Washington. Venezuela’s bank accounts abroad have been frozen and looted by the U.S. and its allies. Western Union has suspended money transfers to Venezuela. And third-country ships carrying supplies to Venezuela have been seized by the U.S. in blatant acts of piracy on international waters. The result has been widespread misery and even death in Venezuela.

The real reasons for the U.S. extradition effort on Alex Saab

David Dawkins, the Forbes staff author of the article on Saab, uses the byline “I cover the work and wealth of Europe’s richest.” Because Forbes services the niche of corporate media that is read by elites and those who attend them, their reports are–as in this case–more factual than some of the more popularly oriented media outlets.

For example, Forbes discloses that Saab is believed to have “the means and know-how to help discreetly keep an entire economy moving under the eyes of a watching world.” The “world” that is “watching” is a reference to the U.S. surveillance state. Because Saab has been instrumental in circumventing the illegal U.S. blockade of Venezuela is exactly why the U.S. has persecuted the diplomat and why Washington seeks to bring him to the U.S.

Indeed, Saab is understood to be, according to Forbes, “a key cog in Venezuela’s national money machine,” who “worked as a key fixer on the country’s housing and food programs, juggling contacts, companies and bank accounts around the world.”

Giving credit where it is due, Forbes notes:

Much to the annoyance of the Trump and Biden administrations, Saab, a creative and capable businessman, found a way to navigate Venezuelan trade in sectors like food, oil and gold between the cracks of U.S. oversight.

The U.S. case against Saab is political, not legal. Femi Falana, Saab’s lead attorney at the regional Economic Community of West African States (ECOWAS) court in Nigeria, maintains “the case against Alex Saab is indeed rooted in political expediency.” The real reason for the U.S. extradition effort, as Forbes reveals, is that Saab is a “serious information asset for the U.S. in understanding just how the country [Venezuela] does business.”

Underlining the importance of Saab to the U.S., the Navy cruiser San Jacinto was clandestinely deployed for a period off the coast of Cabo Verde, where Saab was imprisoned. The New York Times described the dispatch of the warship as a “secret mission aimed at helping deal a major blow to President Nicolás Maduro of Venezuela.”

Forbes correctly reports: “But for many in Venezuela, this [Saab’s activities] is not criminal—Saab is a hero, and his efforts overseas are the actions of a man trying to feed and house the hungry and homeless.” The Venezuelan government recently appointed Saab as an official delegate to the talks in Mexico between them and the opposition United Platform group.

Internationally, Cabo Verde has received diplomatic letters protesting the Saab case from Iran, China, Russia, the United Nations, the African Union, and ECOWAS, based on the principles of immunity and inviolability of consular rights. Over 15,000 internationals have signed a petition to the U.S. and Cape Verdean political leadership to free Alex Saab at https://afgj.org/free-alex-saab.

Forbes says Saab’s extradition is imminent. Saab’s lawyer Femi Falana says, “the legal process is far from over, and His Excellency Alex Saab will not be going to the United States any time soon.” Regardless, Alex Saab says:

For those who dream that my speech or integrity will change if I am extradited, let me spoil that illusion. My integrity does not change with the [political] climate or the type of torture. Venezuela is sovereign.