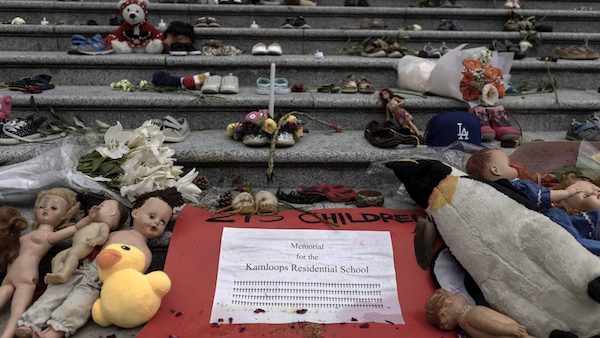 Memorial held in Vancouver, shortly after the discovery of the 215 unmarked graves of Indigenous children at the former Kamloops Indian Residential School in May 2020.(Photo: GoToVan/Flickr)

In a major victory to Indigenous groups in Canada, a federal judge dismissed the government’s plea against a rights tribunal ruling to compensate Indigenous children and their families that suffered discrimination in the country’s foster care. The ruling made by justice Paul Favel of the Federal Court on Wednesday, September 29, upheld the order by the Canadian Human Rights Tribunal on compensation.

In his order dismissing the federal government’s appeal, the judge insisted that the government and Indigenous groups continue negotiations. Implicitly addressing the government, he also asked if the parties involved would let the window of opportunity for talks slip away or “move forward in this spirit of reconciliation.”

The order also noted that the original complainants against foster care discrimination “highlight(ed) that Indigenous people possess inherent Aboriginal and Treaty Rights including the right to self-determination.”

This is a partial vindication for Indigenous rights groups that have long argued that family and child services often encroached upon protected treaty rights of the tribes.

In 2016, responding to a case filed by the First Nations Child and Family Caring Society (Caring Society), the Tribunal found that the Canadian government’s child and family services, especially its foster care system, is heavily discriminatory in how it treats Indigenous families.

According to census data, Indigenous children accounted for nearly 52% of the children in the government’s foster care system, this is despite their population being just around 7.7% of the total child population in the country.

The Tribunal hence ruled the highest possible compensation of CAD 40,000 (around USD 31,400) for the victims of the discriminatory foster care system. It later also passed a follow-up order that the government should also extend the compensation to the parents and grandparents of these children, barring some exceptional cases.

The government justified its appeal against the ruling, by arguing that it would prefer case-by-case negotiations for compensation, rather than a blanket order. This was strongly opposed by Indigenous activists and groups, who have for long demanded reparations for Canada’s colonial policies which have victimized Indigenous nations for centuries.

Welcoming the court’s order, Cindy Blackstock, executive director of the Caring Society that brought the original complaint, said the ruling was “a complete rejection of all the government’s spurious arguments, and a complete win for kids.”

She also called on the government to “do the right thing” and not appeal against the Federal Court’s ruling. “Do not appeal these decisions and obey the legal orders to stop the discrimination. You owe it to the Survivors and the children who were lost to not fight against the equality and care of this generation of children,” argued Blackstock.

The Trudeau government has often been criticized for not going beyond paying lip-service and photo-ops, and for actively resisting realization of Indigenous rights, be it its reluctance to pay compensation for victims of a racist child care policy or implementing any of the recommendations of the Truth and Reconciliation or the construction of contentious oil pipelines through Indigenous lands.

In its 2016 ruling, the Human Rights Tribunal found that discriminatory practices in child and family services for Indigenous families “perpetuate the historical disadvantage and trauma suffered by Aboriginal people, in particular as a result of the Residential Schools system.”

This connection drawn by the Tribunal between the notorious former “Indian residential schools” and the ongoing policy of foster care for Indigenous children, is extremely significant for Canada today. Especially so, considering the Federal Court’s decision to uphold these findings by the rights tribunal came on the eve of the first National Day for Truth and Reconciliation.

The Day for Reconciliation was officially recognized to be held on September 30 by the Canadian parliament, after hundreds of unmarked graves of children were discovered in the estates of the former residential schools, earlier this year. The call for such a day was first made in 2015 by the Truth and Reconciliation Commission of Canada (TRC), as one of its 94 recommendations presented before the government.

The Commission, in its nearly six years of rigorous investigation uncovered large-scale abuse, neglect and what they termed to be “cultural genocide” in dozens of these residential schools that were operated by the Catholic Church and the government for more than a century, before being phased out in the 1950s and 1960s.

According to the Commission’s findings, more than 150,000 children were put through the system, often against their families’ wishes far away from their tribes. Official figures document 3,201 deaths in these schools, but the Commission estimated that the number could be more than 6,000 and that the schools often suppressed data.

This year nearly 1,200 potential graves were identified in the grounds of just three of the 130 schools. With investigations underway to identify more such graves in other schools, the number of actual deaths could be much higher than previously thought.