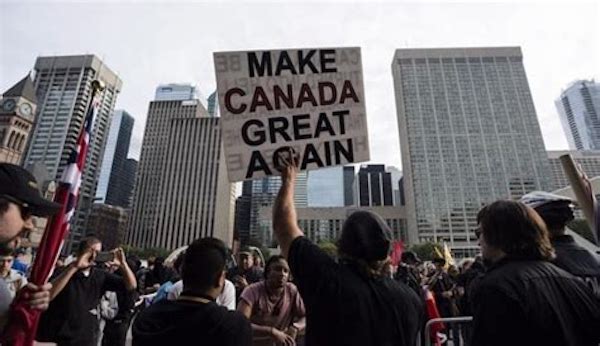 People’s Party of Canada activists can rightly complain about liberal hypocrisy. They might ask why is the PPC odious when the federal government backs far more extreme groups all around the world? In fact, it’s almost a principle of Canadian foreign policy to support fascistic, far right, groups.

While there is no one-size-fits-all definition, fascistic groups are generally violent, authoritarian and racist. They may claim to support freedom or the poor, but largely defend the rich and concentrated power.

In the Ukraine Canada has funded, equipped and trained a neo-Nazi infiltrated police force set up after a core of far right protesters ousted elected president Viktor Yanukovych. According to the Canadian Press, opposition protesters were camped in the Canadian Embassy in Kiev for a week during the February 2014 rebellion against Yanukovych. During his trip to Ukraine in 2016 Prime Minister Justin Trudeau was photographed with Andriy Parubiy, Ukrainian Parliament Speaker, who had a background with the far right and was accused of praising Hitler while two years later Canada’s military attaché in Kiev, Colonel Brian Irwin, met privately with officers from the Azov Battalion, who use the Nazi “Wolfsangel” symbol and praise officials who helped slaughter Jews and Poles during World War II.

Canada has refused to back a number of UN resolutions opposed to glorifying Nazism, neo-Nazism and racial discrimination because they are viewed as targeting the Ukraine. In November 2015 Ottawa voted against a UN General Assembly resolution critical of the aforementioned subject supported by 126 states. The US, Palau and Ukraine were the only other countries to vote against the resolution titled “Combating glorification of Nazism, neo-Nazism and other practices that contribute to fueling contemporary forms of racism, racial discrimination, xenophobia and related intolerance.” Since then, Ottawa has abstained on a similar annual resolution.

In 2019 four prominent former members of the Azov Battalion were photographed at protests in Hong Kong. They said their aim was to learn from the often-violent street protesters, which included a xenophobic hardcore who flew the Union Jack and carried pro-Trump placards. While many Hongkongers are understandably leery of Beijing’s growing influence, reintegrating Hong Kong into China after a century and a half of British rule represents a break from a regrettable colonial legacy.

Still, Ottawa supported the protesters nearly unreservedly even after they injured dozens of police, lit a 57-year-old on fire and killed a 70-year-old bystander (the police engaged in repression though no protester was killed). Even Immigration, Refugees and Citizenship Canada’s Hong Kong office privately cautioned government officials against assuming all Hong Kong protesters seeking asylum were being persecuted, noting “there have been shocking images of violent attacks during confrontations.” But the federal government offered diplomatic support, political asylum and some financial support, including through the U.S. National Democratic Institute, to protest groups in Hong Kong.

Ottawa’s support for fascistic forces in Hong Kong and Ukraine was largely driven by geostrategic competition with China and Russia. In the Ukraine the far right led often violent protests against a president viewed as pro-Russian and many fought in the civil war that followed Yanukovych’s ouster. In Hong Kong Ottawa’s aim was to undermine the Chinese government.

The federal government’s motivation for backing far right forces in Venezuela is slightly different. Over the past two decades Ottawa has aligned with fascistic forces there in the hope of overthrowing a leftist government.

In Haiti Ottawa supports far right elements largely out of fear of the alternative: a reformist, pro-poor government that seeks out alternative regional arrangements. Canada has aggressively supported a self-described skinhead party (baldheaded, according to some translations). The Parti Haïtien Tèt Kale (PHTK) is a brutish crime syndicate that has led the country for a decade. A former member of Duvalier’s Tonton Macoutes, PHTK founder Michel Martelly became president by instigating violent street demonstrations, which enabled Washington and Ottawa to intervene in election counting. The party’s racism is partly reflected in its composition but mostly manifests itself in deference to the country’s light skinned oligarchy and ‘white’ powers that have long subjugated a nation born in a struggle against slavery.

In Israel the Canadian government supports openly racist and fascistic forces. The Canada Revenue Agency subsidizes groups that promote racial/religious purity and that finance those colonizing the West Bank. In June and last week Prime Minister Justin Trudeau spoke with his Israeli counterpart, Naftali Bennett, who boasted in 2013 “I have killed many Arabs in my life, and there’s no problem with that.” After both calls Trudeau praised Bennett and the two countries’ “shared democratic values.” A month before the first call Bennett defended Jewish supremacist thugs who beat and killed Palestinian citizens of Israel. Bennett backed Jewish men detained for fatally shooting an Arab man in the town of Lod and claimed the minority led the violence, calling for steps to be taken to “immediately ensure the safety of the families besieged in their homes for fear of Arab mobs.”

Throughout the Global South the Canadian government commonly supports the far right but rarely the left (basically never the far left). Why? The reason differs slightly in each instance, but the far right is generally willing to do the bidding of corporate and imperial forces even if it wrecks their own society. In Venezuela, for instance, Voluntad Popular supports international sanctions that have devastated the country’s economy.

But there’s another dimension. Politicians seeking to gain or maintain power generally align with power, which largely rests in the hands of corporations, police, military, big media and other top-down institutions. Within Canada popular engagement has diffused power and restrained some of the worst excesses of concentrated power. But Canadians pay little attention to international affairs so the state can get away with a great deal more abroad. A sort of democracy-free zone, foreign policy demonstrates what politicians are willing to do for power.

Most Canadians have little idea that in many places their government actively supports groups that are far more fascistic than the People’s Party of Canada.