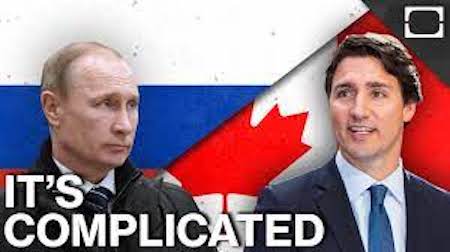 The saber rattling is becoming scary. But Canadian officials labelling Russia “aggressive” while stoking unnecessary conflict has a long history.

Echoing a 2009 statement from Prime Minister Stephen Harper, Prime Minister Justin Trudeau recently denounced “an aggressive Russia”. Throughout their time in office the Liberals have blamed Russia for complicated conflicts in Ukraine and Syria, as well as nuclear proliferation. In a major 2017 foreign policy speech foreign minister Chrystia Freeland called “Russian military adventurism and expansionism … clear strategic threats to the liberal democratic world, including Canada.” But NATO countries spend $1.1 trillion on their militaries each year while Russia’s military budget is $61 billion.

In a dangerous game of brinksmanship, the Trudeau government has expanded Canada’s military presence on Russia’s doorstep. In 2017 the number of Canadian troops in Eastern Europe was more than doubled from approximately 300 in the Ukraine and Poland to 800 in the Ukraine, Romania and Latvia. Alongside these forces, Canada has often had a naval frigate and a half dozen CF-18 fighter jets in Eastern Europe. Recently, they deployed special forces to the Ukraine.

Canada’s military buildup in Eastern Europe is the outgrowth of a coup in Kiev. In 2014 the right-wing nationalist EuroMaidan movement ousted president Viktor Yanukovych who was oscillating between the European Union and Russia. The U.S.-backed coup divided the Ukraine politically, geographically and linguistically (Russian is the mother tongue of 30% of Ukrainians and as much as 75% of those in eastern cities). After Yanukovych’s ouster Russia reinforced its military presence—or “seized”—the southern area of Crimea and then organized a referendum on secession. Home to Moscow’s major Black Sea naval base, Crimea had long been part of Russia and the bulk of the population preferred Moscow’s rule to the post-coup right wing nationalist government in Kiev.

The largely Russian speaking east protested the ouster of Yanukovych who was from the region. After a referendum and fighting the Donetsk and Luhansk People’s Republics were proclaimed in the Donbas region bordering Russia. Moscow aided the movement but showed little interest in absorbing the newly proclaimed republics into Russia as many in the Donbas would have liked.

While we heard about Russia’s nefarious influence in the Ukraine, little attention is given to Canada or the U.S.’s role in stoking tensions there. In July 2015 the Canadian Press reported that opposition protesters were camped in the Canadian Embassy for a week during the February 2014 rebellion against Yanukovych. “Canada’s embassy in Kyiv was used as a haven for several days by anti-government protesters during the uprising that toppled the regime of former president Viktor Yanukovych,” the story noted.

Since the end of the Cold War Ottawa has provided significant support to right wing, nationalist opponents of Russia in the Ukraine and throughout Eastern Europe. Federal government documents uncovered by Canwest in July 2007 explained that Ottawa was trying to be “a visible and effective partner of the United States in Russia, Ukraine and zones of instability in Eastern Europe.” During a July 2007 visit to the Ukraine, Foreign Affairs Minister Peter MacKay said Canada would help provide a “counterbalance” to Russia. “There are outside pressures [on Ukraine], from Russia most notably. … We want to make sure they feel the support that is there for them in the international community.” As part of Canada’s “counterbalance” to Russia MacKay announced $16 million in aid to support what was labeled “democratic reform” in the Ukraine.

Support for the Ukrainian government followed on the heels of Canada’s role in the western-backed “colour” revolutions in Eastern Europe, which were largely aimed at weakening Russian influence in the region. An in-depth Globe and Mail article headlined “Agent Orange: Our secret role in Ukraine” detailed some of the ways Canada intervened in the 2004-2005 Ukrainian elections.

Beginning in January 2004—soon after the success of the Rose Revolution in Georgia, he [Canadian ambassador to the Ukraine, Andrew Robinson] began to organize secret monthly meetings of western ambassadors, presiding over what he called ‘donor coordination’ sessions among 20 countries interested in seeing Mr. [presidential candidate Viktor] Yushchenko succeed. Eventually, he acted as the group’s spokesman and became a prominent critic of the Kuchma government’s heavy handed media control. Canada also invested in a controversial exit poll, carried out on election day by Ukraine’s Razumkov Centre and other groups that contradicted the official results showing Mr. Yanukovich [winning].

The Canadian embassy gave $30,000 U.S. to Pora, a leading civil society group active in the Orange Revolution. In total Ottawa spent half a million dollars promoting “fair elections” in the Ukraine. The ambassador promised the Ukraine’s lead electoral commissioner a passport (Canadian citizenship) if he did “the right thing.” (Imagine if Russia did these things during a Canadian election.) The embassy also paid for 500 election observers from Canada, the largest official delegation from any country (another 500 Ukrainian-Canadians came independently). Many of these election observers were far from impartial, according to the Globe.

The first Eastern European “colour” revolution took place in Serbia just over a year after NATO’s 78-day bombing campaign. During NATO’s illegal bombing of Serbia in 1999, 18 Canadian CF-18 jets dropped 530 bombs in 682 sorties—approximately 10 per cent of NATO’s air operations. “One goal of the war against Yugoslavia,” noted Tariq Ali,

was to expand NATO to the very frontiers of the former Soviet Union.

Bombing Serbia, which deepened Kosovo’s separation from that country, was the final blow to multiethnic Yugoslavia. The former Yugoslavia’s division into ethnic states was attractive to NATO because it diminished Russian influence in the Mediterranean.

Through diplomacy and peacekeeping Canada spurred Yugoslavia’s breakup in the 1990s. During the Cold War, however, Ottawa took a different tack. At a time when Russia was relatively strong, Canada got close to Yugoslavia as a way to pry it away from the Russian-led Warsaw Pact.

Established in 1955 the Warsaw Pact was a response to NATO, which some believe was a Canadian idea. The U.S., Britain and Canada held secrets meetings to discuss creating NATO in March 1948.

Reflected in Ottawa’s support for NATO, immediately after World War II Canadian officials spouted Cold War hysteria despite reports from our ambassador in Moscow that the Soviet elite desired peace with Washington and London. During his nine years as external affairs minister between 1948 and 1957 Lester Pearson repeatedly decried “communist imperialism” and “the international communist conspiracy” in the House of Commons. At a time when European powers controlled dozens of colonies Pearson referred to the “Greatest colonial power of all and the one which exercises power in the most arbitrary and tyrannical fashion, the Soviet Union.”

Begun during World War II the Canadian Psychological Warfare Committee continued to operate throughout the Cold War. It beamed Canadian propaganda (through the CBC International Service) to the Soviet Union and other Eastern Bloc countries. According to former Canadian ambassador to Czechoslovakia and Poland and CBC-IS founder, Jack McCordick, the aim of CBC-IS was “to engage in psychological warfare against the communist regimes.”

In the lead-up to World War II Canadian officials supported the Nazis’ anti-Russian posture and t hroughout the 1920sOttawa attempted to isolate Russia. Six thousand Canadian troops invaded Russia after the Bolsheviks rose to power in 1917. About 600 Canadians fought in Murmansk and Archangel where the British air force dropped diphenylchloroarsine against the Bolsheviks in the summer of 1919. Red Army soldiers fled in panic of a gas that caused uncontrollable coughing and individuals to vomit blood.

The war against the Bolsheviks was initially justified as a way to reopen World War One’s Eastern Front (the Bolsheviks signed a peace treaty with Germany). Canadian troops, however, stayed after World War One ended. In fact, 2,700 Canadian troops arrived in the eastern city of Vladivostok on January 5, 1919, two months after the war’s conclusion.

For some reason, the dominant media rarely mention any of this important background to a story that dominates today’s front pages. They don’t mention Canadian interference in other countries elections because that would make this country look hypocritical. They don’t discuss Canada’s role in the break-up of Yugoslavia into ethnic-based states because that might make a similar break-up of the Ukraine seem historically justified. They present Canadian and other western countries build-up of troops near Russia as defensive rather than offensive. Could that be because they are cheerleaders rather than objective reporters of the facts?

Militarists and the capitalists who profit from war have always used bogeymen to justify ever more military spending. For many decades it was communists who were used to frighten us. But now that they are gone, it’s clearer than ever that it is western capitalism’s ever insatiable desire to dominate that truly threatens the world.