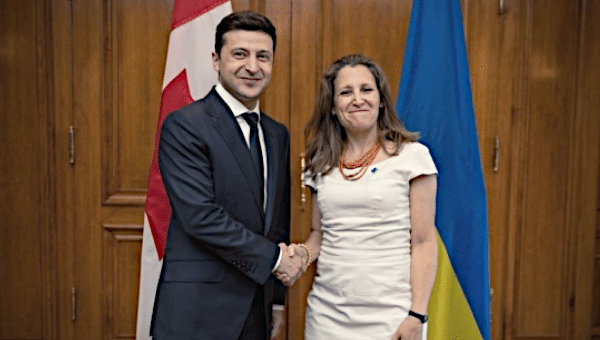 If there was an award for the world’s most hypocritical political party, the Liberal Party of Canada would be frontrunners to take the prize.

In their bid to ramp up tensions between nuclear armed NATO and Russia, this country’s top two politicians flagrantly intervened in Ukrainian affairs while maintaining other nations must stay out of ours.

How does pressuring Zelensky respect Canada’s stated aim of supporting Ukrainian “sovereignty”? Also, didn’t they tell us repeatedly they couldn’t stop the deportation of Huawei executive Meng Wanzhou to the US because they opposed interfering in the legal system?

More important than Liberal party hypocrisy, intervening to support Poroshenko reflects Canada’s promotion of militaristic, regressive, political forces in the Ukraine. In the 2019 election Zelensky trounced (73% to 25%) Poroshenko by running on a pro-peace and anti-oligarch platform. Out of office Poroshenko has worked to scuttle Zelensky’s efforts. Alongside well organized (if electorally insignificant) far right groups, Poroshenko promoted demonstrations and provocative stunts that undermined Zelensky’s peace efforts with Russia and the breakaway republics in the eastern Donbass region.

Having come to power in the aftermath of the U.S. and Canada backed EuroMaidan coup in 2014, Poroshenko is “a fiercely anti-Russian figure in Ukrainian politics”. At the Halifax International Security Forum (HISF) in mid-November Poroshenko instigated the latest bout of ‘Russia will invade’ rhetoric. According to the Globe and Mailreport: “Poroshenko says ‘extremely possible’ Russian military could cross border into Ukraine”. At the NATO-sponsored forum, the former president also called for a Ukrainian Membership Action Plan to “be adopted at the next NATO summit in June.”

Poroshenko has attended the last two HISFs, which receives $3 million a year from Canada’s Department of National Defence. In 2020 HISF President Peter Van Praagh put out a release noting, “in the best interests of Ukraine’s democratic future, President Zelensky should call an immediate halt to all proceedings against Mr. Poroshenko.”

Ottawa and Washington’s support for Poroshenko is part of their assistance to pro-NATO, anti-Russian and anti-socialist political forces in the Ukraine. Over the past three decades Canada has channeled over $1 billion to bolster their political allies in the Ukraine while the U.S. has spent many billions of dollars more.

Canadian support for nationalist, anti-socialist, forces in the Ukraine has a longer history. In 1952 External Affairs Minister Lester Pearson launched a Ukrainian section of Radio Canada International (RCI) to disseminate the Canadian government’s perspective there. The previous year Pearson told Parliament that RCI was “playing a useful part in the psychological war against communism.”

RCI bolstered anti-Soviet, nationalist, elements among the émigré community. The Canadian government has alsosupported ultranationalist Ukrainian émigrés more directly. In 1940 McKenzie King’s Liberal government facilitated the creation of the Ukrainian Canadian Congress (UCC) to undercut more socialist and internationalist elements within the community. In “The Ukrainian Canadian Congress and its Fascist Roots” Richard Sanders writes, “their explicit goal in orchestrating the creation of this umbrella organisation was to rally all anticommunist Ukrainians into one body in order to squash the then-powerful influence of leftwing Ukrainians whose forebears had come to Canada during earlier waves of migration.” After World War II the UCC benefited from Canada opening its door to tens of thousands of Ukrainians nationalists, many of whom had fought with the Nazis against the Soviets.

Over the years Ottawa has provided various forms of financial and other support to the UCC. In so doing, they’ve helped the organization maintain its hegemony over Ukrainian Canadian politics and its sizable international influence. For the last 13 years Canadians have led the Ukrainian World Congress (UWC), which was set up as an anti-Soviet organization. The heads of the UWC and UCC met Poroshenko at the HISF in November.

The UWC, UCC and Canada’s large diaspora community more generally is influential in the Ukraine, which has by far the lowest per capita GDP in Europe. (Ukraine’s per capita GDP is 40% of Mexico’s and 1/12 Canada’s.) Chrystia Freeland provides a stark example of Canadian influence over Ukrainian politics. Long before she convinced President Zelensky to intervene in a legal case against his rival, Freeland was actively promoting a nationalist, anti-socialist position. During a 1989 visit, reports the Globe and Mail, Freeland “delivered cash, video- and audio-recording equipment, and even a personal computer to her contacts in Ukraine.” Freeland’s support to anti-Soviet, Ukrainian nationalists got her followed by the KGB and labeled by the press as an “anti-Soviet bourgeois nationalist.” Freeland represented the UCC and Canadian Institute of Ukrainian Studies at a 1989 congress of the Ukrainian People’s Front.

Freeland’s family are hardline nationalists. Her grandfather, Michael Chomiak, was a Nazi propagandist during World War II. Chomiak edited a Ukrainian language newspaper that published speeches by Hitler and Goebbels, as well as the Nazi’s anti-Jewish/Soviet screeds. Fleeing the Ukraine after the Soviets defeated the Nazis, Chomiak was influential in Alberta’s Ukrainian community through the 1980s. Freeland has repeatedly praised him.

As Freeland highlights, Canada has nurtured ultranationalist forces in the Ukraine. While framed as defending that country from Russian imperialism, it’s hard to take Ottawa’s commitment to Ukrainian “sovereignty” seriously when top Canadian politicians flagrantly interfere in the country’s internal affairs.

But there is a broader question at hand as well. Amidst the pandemic, climate crisis and staggering inequities, do Canadians want to devote more resources and soldiers to ramping up tensions with Russia?

Let’s not forget that the U.S. and Russia possess enough nuclear weapons to wipe out humanity.