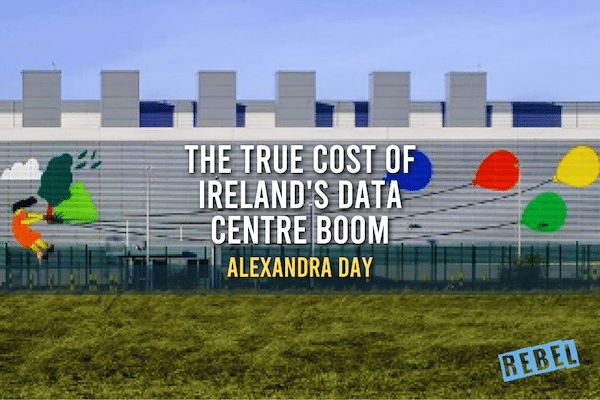 The proliferation of data centres is becoming an area of increasing concern for environmentalists in Ireland. Though presented by the government as an opportunity for investment (owing to considerable lobbying from Google, Amazon, and Microsoft), the growth of these centres has catastrophic implications for the natural environment. They are especially dangerous because although they do not have chimney stacks belching out black smoke, their enormous carbon footprint is concealed behind neat racks of shiny black servers.

Beyond environmentalists, the general public have much to be concerned about from the distinct possibility of power outages and blackouts in the imminent future. Indeed, there have been stark warnings from energy providers of widespread blackouts this winter. When ordinary people are facing cuts in the name of ‘climate’, we have to question why data centres are allowed untrammelled growth across the country.

Data centres are the physical storage centres for the online, digital aspect of our world. Everything we do online, from sending emails to browsing the web or streaming movies, needs to be stored somewhere. If you’re reading this article online, it will generate data that has to be processed and stored. Data centres act like the hard drive on your computer in this way, though instead of storing a handful of documents, they store online information at scale. This is what is meant when we talk about ‘the cloud’.

Though it may sound ethereal and complicated, data centres have considerable ‘real-world’ ramifications. There are currently 70 data centres in Ireland today, an increase of 25% since last year, with Dublin alone the largest data centre hub in Europe. They require enormous amounts of water and energy to power them, and use massive quantities of water to cool the servers down; the energy required to run the centres puts significant pressure on the grid, regardless of whether they are run on renewable energy or fossil fuels; the resulting carbon emissions equated to 1.85% of Ireland’s total emissions in 2020 (a rapid increase); and data centres accounted for approximately 10% of Ireland’s electricity usage in 2019.

A report from Eirgrid suggests that data centres could use up to one third of Ireland’s energy grid by 2030, if their growth is allowed to continue. This will lead to mass, rolling black-outs and strain on the grid across the country. Globally, data centres consume about 2% of electricity, a figure set to reach 8% by 2030. Few countries, if any, will match Ireland’s level.

To demonstrate the disproportionate consumption of energy by data centres, take the example of the proposed data centre for Ennis. During hot weather, the site would use one million litres of water a day. Members of the campaign group Futureproof Clare have shown that this would account for over half of the water consumption of Ennis in a given year.

Furthermore, the centre would consume 200 megawatts, the equivalent of 210,000 homes–the number of homes in Clare, Limerick and Kerry combined. Even if the entire population reduced their energy consumption by 10%, or even more, this effort would be wiped out by the one data centre in Ennis. Practically, people all across the area would face power blackouts for extended periods of time, thus cutting off access to the internet, lighting, cooking facilities, hot water and more.

We can see why it is so farcical for the Irish government to demand that people take more personal responsibility for climate change, and pay more taxes on things like water and carbon, when these data centres are allowed to proliferate across the country. But why are there so many data centres in Ireland today?

The surface level answer is that Ireland has a cooler climate. These conditions are favourable for data centres, which are prone to overheating. However, that does not go very far in explaining why there are so many data centres in Ireland compared to other temperate locations.

The real cause for the disproportionate amount of data centres can be found in the longstanding capitulation of the Irish government to multinational corporations. Since the 1960s and 1970s, the Irish government has focused on ‘attracting foreign investment’ to the country–no matter the cost to ordinary people. Another example is the government’s success in nullifying Apple’s Irish tax bill of €13 billion last year, while the population was shouldering the economic strain of the COVID-19 pandemic.

Major tech companies like Google, Amazon, and Microsoft have pressured the government to release a new policy statement on data centres, and to direct all other government departments and state bodies to fall in line with the policy of supporting the expansion of the centres. These groups are represented by Cloud Infrastructure Ireland, whose director is former Labour TD Michael McCarthy. It is worth noting that McCarthy was a representative for the Labour Party from 2011 to 2016, during their most brutal pursuit of austerity measures and water charges. With the question of water charges once again lingering over Irish politics, one can imagine how they could be hammered down onto ordinary people to ensure cheap and plentiful water supplies for data centres.

Furthermore, there are little to no official planning regulations for data centres in Ireland. Currently, the development of these centres is done on a county council level and approved by An Bord Pleanála. In these approvals, very little consideration is given to climate concerns. As reported by Ian Lumley, Built Environment and Heritage Officer for An Taisce, “If you look at the environmental impact statement undertaken by John Spain Associates for a new Amazon data centre development near Swords, the only climate impact addressed is the truck movements for the construction phase”.

The actual amount of jobs that could be created by these centres has been vastly overstated. Outside the initial construction of the centres, a very limited amount of staff will be applied on any long term or permanent basis. As has been proven to be true with most big tech promises of ‘jobs’ for Ireland, the short-term benefits do not justify the long-term, irreversible costs.

Though the issue is working out at a heightened level in Ireland, the question of data centres is of global relevance. While much is being made of the growth in the production of renewable energy across the globe, this has not actually replaced fossil fuel usage. In fact, we are seeing a massive global energy expansion–both in renewable energies and in fossil fuels.

What role do data centres play in this? Proponents of the data centre expansion correctly point out that we cannot simply go back to using hard drives to store data and that the cloud is a much more efficient way of storing data. Opposition to the centres is painted as being anti-technological or primitivist–‘the socialists want you all to stop watching Netflix!’

The reality is that the vast majority of data usage is industrial. Companies collect a huge amount of data on their products and on work practices in order to cut costs. The massive data expansion is therefore intrinsically linked with capitalist expansion.

Should we support the fossil fuel industry in collecting massive amounts of data in order to analyse and target the most fruitful areas for drilling? Should we support Amazon in surveilling its workers so that it can monitor their every step, in effect putting a manager in their pocket? What about data collection on military technology so that methods of targeting and killing people can be improved? From a socialist perspective, the answer is an obvious no.

Another major source of data generation is for marketing and advertising purposes. Websites and apps constantly collect information on users, which can then be used to sell products and services. Most people are aware and often unhappy about the surveillance of their online behaviours that takes place every day, though they may feel powerless to stop it. What isn’t often thought about is the energy needed to process all of the data they have collected on people so that it can then be used to sell products.

All of this energy consumption cannot simply be outsourced or moved to another part of the globe. Furthermore, we cannot rely on corporations like Amazon to manage their energy consumption, or worse, ‘offset’ it by making pithy investments in wind farms. This amounts to little more than greenwashing. Aside from their appalling treatment of workers, these corporations have proven time and time again that expanding their profits must come before all other concerns. We need to take these decisions out of the hands of the corporations and force the government to take action on climate change.

While we face a winter of unprecedented blackouts and power cuts, we must lay the blame squarely at the feet of the corporations and the government that facilitates them. Our government, including the ironically titled Green Party, have proven that they are both incapable of and unwilling to meet the threat of data centres head-on. Change will not be coming from our policy makers. We must reiterate that a meaningful movement on climate requires us to take on the polluting corporations, not the ordinary people.