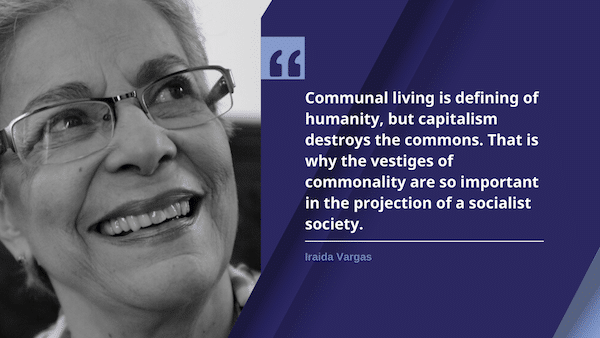 Iraida Vargas and Mario Sanoja are not detached social scientists, indifferent to what they investigate. Instead, their work in anthropology and archeology is overtly engaged, seeking to link Venezuela’s history and prehistory to its present, including to its current political projects. Their 2015 book, The Long March toward Communal Society [La larga marcha hacia la sociedad comunal], scours Venezuela’s history and prehistory for precedents to its contemporary socialist communes. In this interview for Venezuelanalysis, Vargas and Sanoja talk about the methodology they apply in their research and about the historical and cultural roots of the communes that Venezuelans are building today.

Although a historical perspective is important for both Marxists and Chavistas, some sectors of the left have failed to recognize the contributions of the past when projecting a post-capitalist future. However, in your practice as anthropologists, you insist that a society’s history must be taken into consideration when projecting a socialist future.

Vargas: Karl Marx’s analysis includes the study of historical events prior to the formation of capitalism. Marc Bloch developed a concept of progressive history where the starting point for studying the present would be in the past, and he argued: “the past is, by definition, something that cannot be modified. However, our understanding of the past is something that is in a constant process of change, in a constant process of transformation and perfecting.”

In a similar way, I would say that a dynamic and living conception of history is key to our methodology.

In the early days of our work as anthropologists and archeologists–and that was way back in the 60’s when the Rómulo Betancourt government was killing people–the best way for us [as researchers] to participate in the transformation of our reality was to engage in an anthropology for the here and now. What does this mean? In our archeological expeditions, we had a commitment with the present, but we did this intuitively.

That conception brought us to Gramsci, who thought that the past should allow us to imagine how to transform the present. Our methodology (and the methodology of the Latin American Social Anthropology school) developed assuming a theoretical position. In other words, we were not neutral, and we always defined the “why,” the “to what end” and (very important for us) the “for whom.”

We were formed by Federico Brito Figueroa, Miguel Acosta Saignes, and Rodolfo Quintero. These were three communist UCV [Venezuela’s Central University] professors who not only knew a great deal about Venezuelan history but were committed to building a better society. They taught us that as archeologists we had to have objectives relevant to the here and now.

While it is true that our study objects were generally buried under tons of dirt and couldn’t talk to us, there was still much to be learned. Let me give you an example: when studying the hunter and gatherer community that lived in Apure [south of Venezuela] hundreds of years ago, the archeological work showed that the women in that community established a norm that prohibited hunting baby chigüires. Now you can ask, is this really relevant today? As it turns out, that code teaches us about the environmental protection practices developed by the indigenous women of Apure, which is all too relevant nowadays.

We carried out our research and archeological expeditions looking for answers or seeking questions that would be relevant to our present. A relevant question to organize an archeological expedition today could be, how–from what we learn at the dig–can we develop practices of “good living” [buen vivir, the Aymara concept that was rescued by Hugo Chávez].

In short, in our methodology, understanding the social structures, practices, and values of a community became more important than “objectivity,” and this has much to do with our commitment to the present and even to the future.

The European colonial invasions provoked protests, riots, and rebellions. You argue that the legacy of these rebellions contributed not only to the independence struggle but also left a mark in the present with their emancipatory projects. Can you talk about this?

Vargas: Insurrections were continual from the early days of colonization, and the maroon rebellions are the better-known ones. Let’s take the Negro Miguel rebellion in 1553, where enslaved blacks and large contingents of Jiraharas [indigeneous population] rebelled against the colonizers, establishing a kingdom with its seat in Buría [Lara state].

Of course, the rebels always had a project, but historians often deny that because their interpretation is permeated by racist conceptions. They will say: Bolívar had a project, but what was the project of the Negro Miguel? In fact, he proposed to make a kingdom based on what he had experienced in Benin before being turned into a slave.

Sanoja: In the late 18th century there were black Jacobin insurrections influenced by the Haitian Revolution. They began in the West of the country, but they rapidly grew and challenged the colonial regime. The rebels had a project: establishing an all-black republic that would follow the “law of the French.” As opposed to the Negro Miguel rebellion, their aim was to annihilate all whites.

Later, in 1830, the country was rapidly swept, from East to West, by another rebellion against creole domination that also aimed to create a black republic.

All these rebellions had projects and they challenged the established creole order. They have left their rebellious imprint in the here and now.

In The Long March toward Communal Society you write: “The persistence of communitarian traditions of both aboriginal and black-Venezuelan societies contributes to supporting the development of extensive communal systems, both rural and urban, propelled by the Bolivarian Revolution.” This is interesting but could a culture as urban as that of most Venezuelans today really preserve elements of that communitarian past?

Vargas: If anything has been revived thanks to the Bolivarian Revolution, it is communal life. The Chavista people have put into practice Chávez’s slogan Commune or Nothing! and this, in turn, is a product of popular organization or popular power.

We see communal construction not only in rural areas but also in cities. To understand the phenomenon we should point to the fact that urban barrio cultures here have a campesino origin. In the 50s, 60s, and 70s people from rural areas came to the cities, and with them they brought vestiges of communal life. In fact, you can see this in the distribution of domestic spaces, which are somewhat reminiscent of the houses in the Llanos [center-south of the country] and Andes [Venezuela’s mountainous region] where common spaces with flower gardens are often found.

In Caracas barrios, rural forms of solidarity also express themselves in the cayapas [indigenous Caribe word referring to collective labor activities] and in other practices of mutual aid. In fact, the collaborative construction of houses in some Housing Mission initiatives [Campamentos de Pioneros] is a good example of mutual or collaborative work processes.

Communal solidarity also operates among women in the barrios. Those who work outside the community will often get help from other women to care for their children, who may even eat at the community canteens that offer food to those who need it. The canteens likewise maintain campesino culinary traditions.

Finally, when we think about the living traditions that we inherit from communal societies, we cannot overlook the festivities nominally dedicated to patron saints. These distinctive cultural practices have much to do with sharing, joy of life, and the love for music. Venezuelans tend to be cheerful, lively, and relaxed, and these are traits that don’t have their origin in the colonizers.

Sanoja: One case that is relevant to the debate about communes in urban spaces is 23 de Enero in western Caracas. Up until 1954 poor black communities inhabited Caño Amarillo [a part of 23 de Enero barrio] maintaining many practices of solidarity and powerful cultural traditions. As it turns out, 23 de Enero is an epicenter of communal organization in Caracas today. That isn’t coincidental: the vestiges of communal organization are a key factor.

When Chávez began promoting the construction of communes, the people in 23 de Enero were better positioned to advance. No doubt the recent history of rebelliousness against the governments of the Fourth Republic [1958-99] strengthened these communities. However, I am convinced that the pre-existing forms of communality and cultural identity also played an important role.

If you go to El Panal Commune, you will find not only a new political organization but also a radio, a TV station, etc. They have a socio-political project in which one can see past communal practices reemerge and shape the new society.

Vargas: In Venezuela, there is a socio-cultural movement that is very powerful and the enemy is generally blind to it. Collectivized life here is rather common even if it is not immediately evident. U.S. sanctions have inadvertently promoted communal forms that were underlying in our society. The objective of the blockade was to end the revolution but, as it turns out, we have seen a growing identification between the people and communalized initiatives in recent years.

The Caquetío civilization flourished in the center region of what we now know as Venezuela through the 16th century. They lived communally, produced fine pottery, and grew corn. In that same territory, some of Venezuela’s most important communal initiatives are taking shape right now. You have argued that this is not accidental, that the vestiges of that society are important in the present.

Vargas: What is the first thing that colonizers do when they take control of a people? They break the value system, particularly the existing forms of communal life and solidarity. They do it because they understand that such value systems go against their interests. In turn, we should be aware that maintaining or recovering value systems based on solidarity, systems where the vestiges of communal life remain, is necessary if we are committed to a socialist future.

In fact, the story of the Caquetíos, who settled for hundreds of years where we now see cooperatives such as Cecosesola [a large cooperative union in Lara state] and communes such as Ataroa or El Maizal, is a good argument for our thesis.

Our archeological research allowed us to understand that today’s communes do not constitute an external implant in that territory. On the contrary, as shown by the anthropological and historical record, many manifestations of communal culture that we now find are rooted on aboriginal traditions.

Today the communes constitute one of the key territorial forms of popular resistance against capitalism. They are based on social property, on the collective accumulation of knowledge, on a non-capitalist socio-spatial organization of productive forces, and they embody a strong class and cultural identity. Many of these traits can be found in the socio-cultural organization of the peoples that inhabited the territory before colonization.

Sanoja: Indeed the concept of the commune is prehispanic. The Caquetíos people developed a very rich communal culture in what we now know as Falcón, Lara, Yaracuy, and part of Barinas [center and west of Venezuela], and it is in those territories where we find more communes.

In the 60s, we carried out excavations in that region, but we also got to know the local cultures. What we found is that, while the creole-settler socio-economic formations were the most visible ones, there was also an underlying communal substrate. We learned that communal structures were never fully erased, and that is why we see projects like El Maizal flourishing there.

In other words, the meeting of the past and the present is opening the way for new social, political, and economic formations in that territory.

Vargas: Communal living is defining of humanity, but capitalism destroys the commons. That is why the vestiges of communal life are so important in the projection of a socialist society.