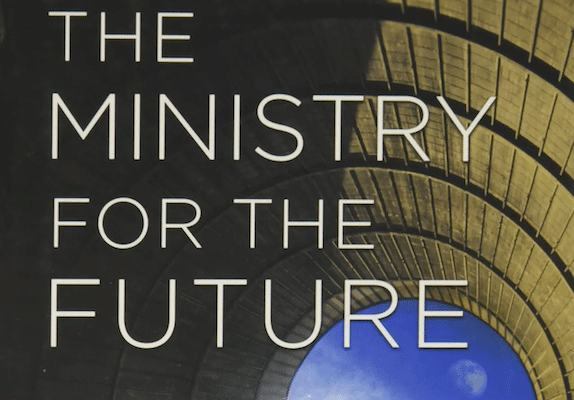 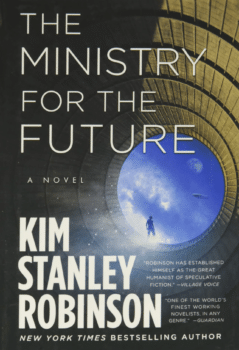 It seems perversely easier to tell a science fictional story about a world centuries in the future than the one just a few years away. Somehow we have become collectively convinced that massive world-historical changes are something that cannot happen in the short term, even as the last five years alone have seen the coronavirus pandemic; the emergence of CRISPR gene editing; too many droughts, hurricanes, and wildfires to count; the legalization of gay marriage in many countries, including the United States; mass shooting after mass shooting after mass shooting; the #MeToo and #BlackLivesMatter movements; the emergence of self-driving cars; Brexit; and the election of Donald Trump to the presidency of the United States. We are living through historic times–the most widely tumultuous period of transformation and catastrophe for the planet since the end of World War II, with overlapping political, social, economic, and ecological crises that threaten to turn the coming decades into hell on Earth–but it has not helped us to think historically, or to understand that no matter how hard we vote things are never going to “get back to normal.” Everything is different now.

The Ministry for the Future is Kim Stanley Robinson’s grimmest book since 2015’s Aurora, and likely the grimmest book he has written to date–but it is also one of his most ambitious, as he seeks to tell the story of how, given what science and history both tell us to be true, the rest of our lives could be anything but an endless nightmare. It is not an easy read, with none of the strategies of spatial or temporal distancing that make Mars or the Moon or the New York of 2140 feel like spaces of optimistic historical possibility; it’s a book that calls on us instead to imagine living through a revolution ourselves, as we are, in the here and now. Robinson, our culture’s last great utopian, hasn’t lost heart exactly–but he’s definitely getting deep down into the muck of things this time.

The Ministry of the title is a subsidiary body of the United Nations, tasked “to advocate for the world’s future generations of citizens, whose rights, as defined in the Universal Declaration of Human Rights, are as valid as our own” and further “charged with defending all living creatures present and future who cannot speak for themselves, by promoting their legal standing and physical protection.” They are, in short, bureaucrats, a job description Robinson neither lionizes nor denigrates; they are the smart but boring people tasked with crafting the smart but boring rules that will govern day-to-day life on our post-normal planet as it struggles to decarbonize. As the novel begins, they are failures, just as our own bureaucrats are failures; the changes that are being made are too piecemeal, too timid, too slow, and too toothless to actually address the real scale of the climate crisis, much less with sufficient speed and efficacy to keep our futures from being miserable. The novel’s first chapter lays out the real scope of this failure in truly visceral horrifying detail, depicting a brutal heat wave in India that kills 20,000,000 people in a single week. It is the worst week in human history–or rather, as the popular Simpsons meme relentlessly and hopelessly reminds us, the worst week in human history so far.

From here the novel begins a version of the John Dos Passos–inspired polyperspectival writing that Robinson has used for his novels since 2012’s 2312, combining traditional narrative with other prose forms like the encyclopedia article, the think piece, the news report, meeting minutes, the Socratic college seminar, the prose poem, the riddle game, and more. We understand, on some level, that we are following Frank May, a deeply traumatized survivor of the Indian heat wave, and Mary Murphy, the chairwoman of the Ministry for the Future, as our two main characters–but Robinson successfully distracts the reader with the Dos Passos method such that when the two wind up in the same place at the same time and begin to interact about one-eighth of the way through the novel, the shock of the tense moment explodes the narrative into an entirely new energy state. Having pursued, in different ways, ecoterrorism as a solution to his now-broken psyche, Frank takes Mary prisoner in her home and demands that she recognize that the bureaucratic, rule-of-law approach the Ministry has taken up to now is simply inadequate to the moment. “‘You’re not doing everything you can, and what you are doing isn’t going to be enough.’ He leaned toward her again and captured her gaze, his eyes bloodshot and bugging out, pale tortured blue eyes scarcely held in by his sweating red face–transfixing her–‘Admit it!’”

Crazed as Frank is, he’s right. By the end of their encounter, she’s convinced. The moment is stunning, and not just for the fans who have followed Robinson’s writing for decades–for all his radicalism and utopianism he has always also been a we-can-win-the-argument, marketplace-of-ideas liberal at his core, at least up to now. But it is also shocking for any consumer of U.S. popular culture, which mandates that nonviolence always be the solution to every problem, and that the good people in the system can always in the end be trusted to reform it, right in the nick of time. The Ministry for the Future takes us to the other side of that surety, asking a question that has typically been forbidden to ask in anything but deeply coded, allegorical, and sublimated terms: What if political violence has a role to play in saving the future? What if you actually can’t beat the bastards playing by their rules in the institutions they buy and sell?

If you truly claim to represent the people of the future, Frank asks–people who have the exact same right to a livable planet that we do–doesn’t that mean you should be willing to kill in their defense? Not as a first choice, not as the only choice–but can you really take it off the table? “If your organization represents the people who will be born after us, well, that’s a heavy burden! It’s a real responsibility! You have to think like them! You have to do what they would do if they were here,” Frank argues. “I don’t think they would countenance murder,” retorts Mary, to which Frank replies, “Of course they would!”

The Ministry for the Future is thus a novel about bureaucracy, but it’s also about the possibility of a wide diversity of tactics in the name of a livable future that include fighting both inside and outside the system. Characters in the novel contemplate targeted assassination of politicians and CEOs, industrial sabotage of coal plants, intentionally bringing down airliners in the name of destroying commercial air travel, bioterrorism against industrial slaughterhouses–and they do more than contemplate them. How does it change what’s possible when we stop worrying so much about losing in the right way, and start thinking about winning in the wrong ways?

Robinson’s Aurora–another extremely grim book from our great utopian!–had a troubled reception because of the way it bloodlessly dismantled (with no joy, just cool-eyed reason and the math to back it up) certain sacred cows in the science fiction genre, particularly the trope of the generational starship and the assumed desirability of interstellar colonization. I suspect The Ministry for the Future will be similarly controversial, but for a significantly different reason: it crosses the optimism of progressive political discourse with the brutality of apocalyptic eco-SF and emerges in an oddly hybrid form that is both and neither. Geoengineering, carbon credits and carbon taxation, the Paris Agreement, divestment, voting in people of good conscience and voting out the people without any–yes, all of these are important and useful, but none of them alone can save the future. The Ministry for the Future needs a black ops division, too. What passes for hope here is thus a very particular, very narrow trail somewhere between reform, revolution, and revenge. More than its grimness, what is most new about The Ministry for the Future for Robinson is how truly dangerous it is as a novel, how it opens the door on questions we sensible people have mostly agreed not to ask. As I write this California is burning, Louisiana is drowning, the poles are melting, and the Amazon is being bulldozed; if Robinson is right, not asking may be yet another luxury we’ll all need to give up soon.

Of course, that’s not all there is to it. The violent chaos of ecoterrorism is only one head of a many-headed dragon. The Ministry for the Future also deploys any number of by-the-book transformations of the political and economic institutions of the 21st century too, many of which will be familiar to devotees of Robinson’s works: the Mondragon economic system returns from his earlier novels, as do debt strike, postnationalism, cryptocurrency, Fredric Jameson quotes, and some good old-fashioned socialism. A few of the geoengineering schemes our heroes come up with actually seem promising, as does the calculated rewilding of half the globe they enact, a scheme Robinson himself proposed in a Guardian op-ed in 2018. We can convert to mostly clean energy, eat much less meat, and change the way we travel and the way we transport goods around the planet to be less carbon-intensive. We can, indeed, simply leave the oil and coal in the ground rather than burning enough to cook us all. The rich old empires, America chief and worst among them, could just get out of the way, letting the people who are still trying to save the future do their best, and allow them to save most of it. We won’t, of course–at least not the way things are going–but we could, even from here, create a “good Anthropocene” to replace the bad one we’ve condemned ourselves to endure. One of the most intractable problems the Ministry for the Future faces is really the fundamental problem of human psychology: how trauma blinds us, how depression blinds us, how hope blinds us, how normalcy bias blinds us, even the sick and twisted Götterdämmerung narcissism that leads some people to feel that (as Robinson puts it) “if they’re going to die then the world must die with them.” In a sense we all already know What Is To Be Done, and the real problem is navigating the grief and fear and selfishness that prevents us from ever actually putting what we all know to be true into practice.

The brilliance of The Ministry for the Future is that it knows there is no one solution to the fundamental problem of human psychology; some people in the novel need eco-religion, some people need scientific debate, some people need to be convinced there’s more money in a sustainable future than in civilizational collapse, some people only respond to violence, like it or not. There are many roads to enlightenment, the novel seems to be suggesting. Pick whichever road will take you there, and go.

Nor is “enlightenment” merely negative theology. It’s not just a threat to change or die. “I am blood in the streets, the catastrophe you can never forget,” one of the novel’s riddle-games asks. “You know what I am. I am History. Now make me good.” If the novel asks us to really commit to standing in the judgment of a future that wants a livable planet more than it wants a clean fight, it also asks us to imagine what a good history of the future might actually look like. The Ministry for the Future thus retains, despite that grim outlook, the urgent utopian charge one expects from a Kim Stanley Robinson novel, which it is able to articulate with his usual visionary clarity:

Tall order. Nonetheless, the terms are clear: if you’re reading this, you are the Ministry for the Future. Get back to work.

Gerry Canavan is an associate professor of contemporary literature at Marquette University and the author of Octavia E. Butler.