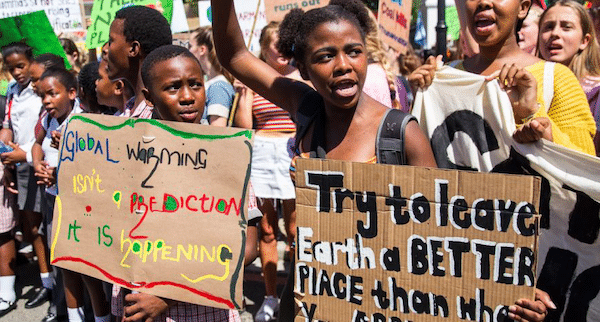 Max Ajl’s new book for those who complain that there is no clearly defined ecosocialist manifesto, Max Ajl, author of A People’s Green New Deal (Pluto Press, 2021),  attempts to fill that void. In an accessible, condensed fashion, the author provides a comprehensive survey of the nuanced issues a red-green alliance must confront and resolve.

What the book contributes to the growing list of Green New Deals is a strong focus on eco-internationalism, something the author finds lacking across the climate movement. Using an anti-imperialist framework, Ajl insists that calls for climate justice must include the controversial notions of reparations and climate debt. While I find this part of his argument convincing, there are also aspects of “the national question” and “sovereignty” that remain problematic and unresolved in his account.

Mostly due to climate-related catastrophes of the last decade — fires, floods, heatwaves, and hurricanes — even corporate reformers, investment banks, politicians, and generals are suddenly using the language of “climate emergency.” Max Ajl does an excellent job decoding this language, demonstrating how elite concern for “greening” is channeled into new avenues for capital accumulation and imperialist control. Their strategy, abetted by powerful greenwashing groups such as the Energy Transitions Commission, the World Business Council for Sustainable Development, the Climate Finance Leadership Initiative and the Breakthrough Institute, is a familiar one: “Re-direct public funds” in order to subsidize so-called “green” industry.

The author spends the first chapter documenting this familiar neoliberal con of socializing the risks while privatizing the profit. It is these same groups that have promoted the lie that economic growth can be decoupled from emissions, a lie heartily embraced by the world’s governments and their capitalist handlers.

Ajl lumps all these “green capitalist” initiatives under the term “Great Transition” (his capitals and scare quotes), but it is never clear from where the rubric arises. He also admits that to avoid collapse “some sectors…need to grow incredibly fast” but leaves the questions of profit and control unanswered. Mining is a sector where growth needs to be rigorously monitored.

What, therefore, is to be done?

In the second half of the book Ajl delves into the various Green New Deals that have been rolled out, dividing proposals between those in the pro-growth/eco-modernist camp and those focused on transformational system change. Because global heating is but one in a host of ecological crises the planet faces and the build-out of renewable energy systems adds to those impacts, the author insists development in the Global South/periphery must be balanced by degrowth in the North/core.

It is through this anti-imperialist lens that Ajl views climate justice, and here he emphasizes the demands made through the Cochabamba people’s process. These combine decolonization with decommodification, giving specific rights to Mother Earth. If the damage caused by centuries of “uneven exchange” between core and periphery is to be accounted for, restoration must include atmospheric space, technology transfers, and adaptation costs. As the author explains, the North has accumulated tremendous wealth by enclosing the atmosphere as a pollution dump, limiting the pathway for the world’s poor. Now the polluter must pay.

However, it is within this juncture of property rights, land title, sovereignty, and borders — that is, the “national question,” with the coercion and competition it implies — where certain contradictions emerge. How do ecosocialists keep the language of “extractivism” and Land Back from running counter to the commons and democratic control? Through what process are certain forms of knowledge privileged while others are rejected? If the needs of the working poor conflict with the biotic community, how might disputes be settled? These urgent political questions need careful and caring deliberation rather than romantic abstraction or symbolically “woke” declarations.

The mainstream New Deals such as the Markey/AOC version are described as social democratic/green/Keynesian, and here Ajl primarily finds fault with their silence on that looming question of climate debt. He places a great emphasis on developing a sustainable food system and sees great promise in land use practices such as agroecology and permaculture whereby CO2 can be sequestered in soils.

He has no patience for “vegan extremism,” which he characterizes as colonialist oppression. At the same time Ajl embraces urban living through rational planning, and here the devil is in the details. To his credit, Ajl confronts these debates in good faith, makes his own concrete proposals, and defends them.

In this book Ajl covers most of the big questions facing rational, ecosocialist design: nationalization vs localism, modernization vs degrowth, techno-scientific solutions vs indigenous knowledge. He holds out hope that with a radical political reordering, the environmental question of impacts can be resolved in a just fashion, for humans and non-humans alike.

On its face, Aji’s proposal should appeal to all those who considers themselves ecosocialists, as it embraces: “the worldwide decommodification of social life and the conscious and conscientious management by the associated producers, or revolutionary humanity, of our relationship with non-human nature…” But again, as Aji himself states, “angels and devils dwell in the details.”

Dave Jones is a retired fishing guide and autodidact living in western Montana. He is the father of three amazing women, and husband to a fourth. Dave has a diploma proving he graduated from high school, though he can’t remember one day of it ( stoned the entire time ). He is a founding member of the Zootown Zapatistas and, along with SCNCC, is active in the DSA. When not organizing for socialist revolution, he can be found waving a flyrod about on some meandering stream.