Food Sovereignty is a philosophy of life.

It offers a vision for our collective future, and defines the principles around which we organize our daily living and co-exist with Mother Earth. It is a celebration of life and all the diversity around us. It embraces every element of our cosmos; the sky above our heads, the land beneath our feet, the air we breathe, the forests, the mountains, valleys, farms, oceans, rivers and ponds. It recognizes and protects the inter-dependency between eight million species that share this home with us.

We inherited this collective wisdom from our ancestors, who ploughed the land and waded the waters for 10,000 years, a period in which we evolved into an agrarian society. Food Sovereignty promotes justice, equality, dignity, fraternity and solidarity. Food Sovereignty is also the science of life–built through lived realities spread across countless generations, each teaching their progeny something new, inventing new methods and techniques which sat harmoniously with nature.

As holders of this rich heritage, it is our collective responsibility to defend it and preserve it. 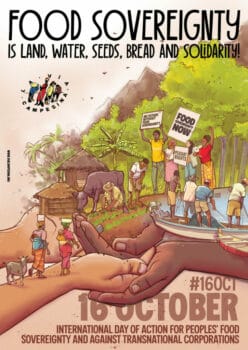 Recognizing this as our duty–especially in the late ’90s when conflicts, acute hunger, global warming and extreme poverty were too visible to ignore–La Via Campesina (LVC) brought the paradigm of Food Sovereignty into international policy-making spaces. LVC reminded the world that this philosophy of life must guide the principles of our shared living.

The ’80s and the ’90s were an era of unbridled capitalist expansion–at a pace never seen before in human history. Cities were expanding, growing on the backs of cheap, unpaid and underpaid labour. The countryside was being pushed into oblivion. Rural communities and rural ways of living were swept under the carpet by a new ideology that wanted to turn everybody into a mere consumer of things and an object of exploitation for profit. Popular culture and consciousness were under the spell of glittery advertisements goading people to “buy more”. In all this, though, the ones who produced–the working class in the rural areas, coasts and cities, which included the peasants and other small-scale food producers–remained invisible, while the ones who could afford to consume with wander took centre stage. Pushed to the edges, peasant 1 workers and indigenous communities worldwide recognized the urgent necessity for an organized and internationalist response to this globalizing, free-market ideology propagated by the defenders of the capitalist world order. Food Sovereignty became one of the expressions of this collective response.

At the 1996 World Food Summit, in a debate about how we organize our global food systems, La Via Campesina coined the term food sovereignty; to insist upon the centrality of the small-scale food producers, the accumulated wisdom of generations, the autonomy and diversity of rural and urban communities and solidarity between peoples, as essential components for crafting policies around food and agriculture.

In the ensuing decade, social movements and civil society actors worked together to define it further “as the right of peoples to healthy and culturally appropriate food produced through ecologically sound and sustainable methods, and their right to define their own food and agriculture systems. It puts the aspirations and needs of those who produce, distribute and consume food at the heart of food systems and policies rather than the demands of markets and corporations.”

Until then, especially in the early years of the 21st century, a narrow idea of “Food Security” dominated governance and policy-making circles. Noble in its intent, food security treated those affected by hunger as objects of compassion, risked reducing them to passive consumers of food produced elsewhere. While it recognized food as a fundamental human right, it did not defend the objective conditions for producing food. Who produces? For Whom? How? Where? And Why? All these questions were absent, and the focus was decidedly on merely “feeding the people”. An overt emphasis on people’s food security ignored the hazardous consequences of industrial food production and factory farming, built on the sweat and labour of migrant workers.

Food Sovereignty, on the other hand, presents a radical overhaul. It recognizes people and local communities as the principal actors in the fight against poverty and hunger. It calls for strong local communities and defends their right to produce and consume before trading the surplus. It demands autonomy and objective conditions to use local resources, calls for agrarian reform and collective ownership of territories. It defends the rights of peasant communities to use, save, exchange seeds. It stands for the rights of people to eat healthy, nutritious food. It encourages agroecological production cycles, respecting climatic and cultural diversities in every community. Social peace, social justice, gender justice and solidarity economies are essential pre-conditions for realizing food sovereignty. It calls for an international trade order based on cooperation and compassion as against competition and coercion. It calls for a society that rejects discrimination in all forms–caste, class, racial and gender–and urges people to fight patriarchy and parochialism. A tree is only strong as its roots. Food Sovereignty, defined by social movements in the ‘90s and subsequently at the Nyeleni Forum in Mali in 2007, intends to do precisely that.

This year we celebrate 25 years of this collective construction

The world is nowhere near perfect. Capitalism and free-market ideology continue to dominate policy circles even in the face of unprecedented inequality, rising hunger and extreme poverty. Worse, new attempts are also being made to envision a digital future–of farming without farmers, fishing without fishers- all under the garb of digitalisation of agriculture and to create new markets for synthetic food.

All these challenges notwithstanding, the Food Sovereignty Movement, which is now much more extensive than La Via Campesina and comprises several actors, has made significant advances.

Thanks to our joint struggles, global governance institutions such as the FAO 2 have come to recognize the centrality of peoples’ food sovereignty in international policy-making. The UN Declaration on Rights Peasants and Other People Working in Rural Areas further re-emphasizes this in Article 15.4, when it states, “Peasants and other people working in rural areas have the right to determine their own food and agriculture systems, recognized by many States and regions as the right to food sovereignty. This includes the right to participate in decision-making processes on food and agriculture policy and the right to healthy and adequate food produced through ecologically sound and sustainable methods that respect their cultures.”

Some nations have also given constitutional recognition to Food Sovereignty. The disruptions caused by the COVID-19 pandemic in the industrial food chains have further reminded national governments of the importance of creating robust local economies.

Peasant Agroecology, which is fundamental to ensuring food sovereignty in our territories, is now recognized at the FAO as central to our fight against global warming. Current and previous Special Rapporteurs of the United Nations have endorsed food sovereignty as a simple but powerful idea that can transform the global food system favouring small-scale food producers. Sustained campaign by social movements have also resulted in several legal victories against corporations producing agro-toxins, other chemical inputs and transgenic seeds.

Yet, what lies ahead of us is a road ridden with many barriers.

The promoters of the capitalist world order realize that food sovereignty is an idea that impinges on their financial interests. They prefer a world of monoculture and homogenous tastes, where food can be mass-produced using cheap labour in faraway factories, disregarding its ecological, human and social impacts. They prefer economies of scale to robust local economies. They choose a global-free market (based on speculation and cut-throat competition) over solidarity economies that require more robust territorial markets (local peasant markets) and active participation of local food producers. They prefer to have land banks where industrial-scale contract farming would replace small-holder producers. They inject our soil with agro-toxics for better short-term yields, ignoring the irreversible damage to soil health. Their trawlers will again crawl the oceans and rivers, netting fishes for a global market while the coastal communities starve. They will continue to try to hijack indigenous peasant seeds through patents and seed treaties. The trade agreements they craft will again aim to bring down tariffs that protect our local economies.

An exodus of unemployed youth, deserting village farms and choosing wage work in cities, sits perfectly with their urge to find a regular supply of cheap labour. Their unrelenting focus on “margins” would mean that they will find all means to depress farm-gate prices while trading it at higher prices at retail supermarkets. In the end, the ones who lose are the people–both the producers and consumers. Those who resist will be criminalized. A happy co-existence of the global financial elite with authoritarian governments would mean that even the highest institutions–nationally and globally–meant to oversee and arrest human rights violations will look away. Billionaires would use their philanthropic foundations to fund agencies that churn out “research reports” and “scientific journals” to justify this corporate vision of our food systems. Every global governance space, where the social movements and civil society members campaigned hard to gain a seat at the table, will make way for Corporate Conglomerates who will enter the scene as “stakeholders”. Every attempt will be made to deride those of us who defend Food Sovereignty as unscientific, primitive, impractical and idealistic. All this will happen, as it did over the last two decades.

None of this is new to us. Those condemned to the peripheries of our societies by a cruel and all-devouring capitalist system have no choice but to fight back. We must resist and show that we exist. It is not just about our survival, but also about future generations and a way of life handed down through generations. It is for the future of humanity that we defend our food sovereignty.

This is only possible if we insist that any local, national or global policy proposal on food and agriculture must build from the principles of food sovereignty. The young peasants and workers of our worldwide movement must lead this fight. We must remind ourselves that the only way to make our voice heard is by uniting and building new alliances within and across every border. Rural and Urban Social Movements, Trade Unions and civil society actors, progressive governments, academics, scientists and technology enthusiasts must come together to defend this vision for our future. Peasant women and other oppressed gender minorities must find equal space in the leadership of our movement at all levels. We must sow the seeds of solidarity in our communities and address all forms of discrimination that keep rural societies divided.

Food Sovereignty offers a manifesto for the future, a feminist vision that embraces diversity. It is an idea that unites humanity and puts us at the service of Mother Earth that feeds and nourishes us.

In its defence, we stand united.