This week, COP26 meets in Glasgow, Scotland. Every country in the world is supposed to be represented in meetings designed to achieve agreement on limiting and reducing greenhouse gas emissions so that the planet does not overheat and cause widespread damage to the environment, species and human livelihoods across the planet.

We are currently on track for at least a 2.7C hotter world by the end of the century–and that’s only if countries meet all the pledges that they have made. Currently they are nowhere near doing that. Governments are “seemingly light years away from reaching our climate action targets”, to quote UN chief Guterres.

Global energy-related carbon dioxide emissions are on course to surge by 1.5 billion tonnes in 2021–the second-largest increase in history–reversing most of last year’s decline caused by the COVID-19 pandemic. Global emissions are expected to increase by 16%, not fall, by 2030 compared with 2010 levels.

COP stands for the Conference of the Parties to the 1992 United Nations Framework Convention on Climate Change, which set the stage for all international cooperation on climate. According to the UN, the top three priorities of the Glasgow COP26 are to: 1) keep the global temperature rise to no more than 1.5 degrees Celsius through “rapid, bold emissions cuts” and net-zero commitments; 2) increase international finance for adaptation to at least half the total spent on climate action; 3) meet the existing commitment to provide $100 billion in international climate finance each year so that developing countries can invest in green technologies, and protect lives and livelihoods against worsening climate impacts. The reality is that even these modest priority targets are not going to be agreed in Glasgow and certainly not met in application, given the current make-up of governments and the plans of industry and finance around the world.

There is no longer any plausible scientific argument against the view that human activities are having a profound effect on the climate.  The dwindling band of ‘climate sceptics’ have been silenced (at least in the mainstream media) by the overwhelming and increasing evidence that fossil-fuel based industrial and energy production and transport is causing rising carbon and other greenhouse gas emissions and this is the the cause of global warming. Moreover, global warming since the industrial revolutions of the 19th century has now risen to the point where it is destroying the planet.

But what is not so understood is that this impending (and already beginning) disaster could still be averted and reversed and without a significant cost to governments. Indeed, the latest report from the International Energy Agency’s World Energy Outlook 2021 shows that we know what to do about it, in substantial detail and at an affordable cost. But there is no political will to do so by governments, beholden are they to the fossil-fuel industry, to aviation and transport sectors and to the demands of finance and industrial capitalists as a whole to preserve profits at the expense of social need. 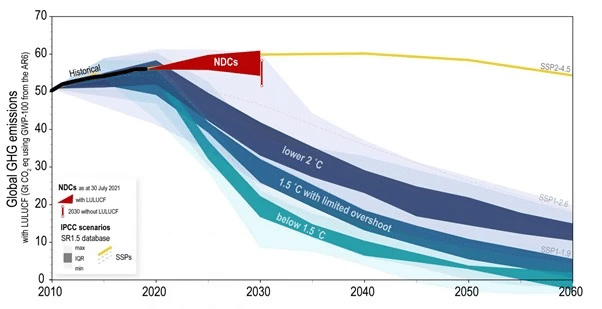 Already there is a yawning gap between government commitments to reduce emissions to be offered at COP26 and what is necessary.  The Intergovernmental Panel on Climate Change (IPCC) estimates that limiting global average temperature increases to 1.5C requires a reduction of CO2 emissions of 45% by 2030 or a 25% reduction by 2030 to limit warming to 2C. 113 governments have offered National Determined Contributions (NDCs), which will reduce greenhouse gas emissions by only 12% in 2030 compared to 2010.

Indeed, G20 countries have directed around USD 300 billion in new funds towards fossil fuel activities since the beginning of the COVID-19 pandemic–more than they have toward clean energy. According to the International Energy Agency, only  2% of governments’ “build back better” recovery spending has been invested in clean energy, while at same time the production and burning of coal, oil and gas was subsidised by $5.9tn in 2020 alone. 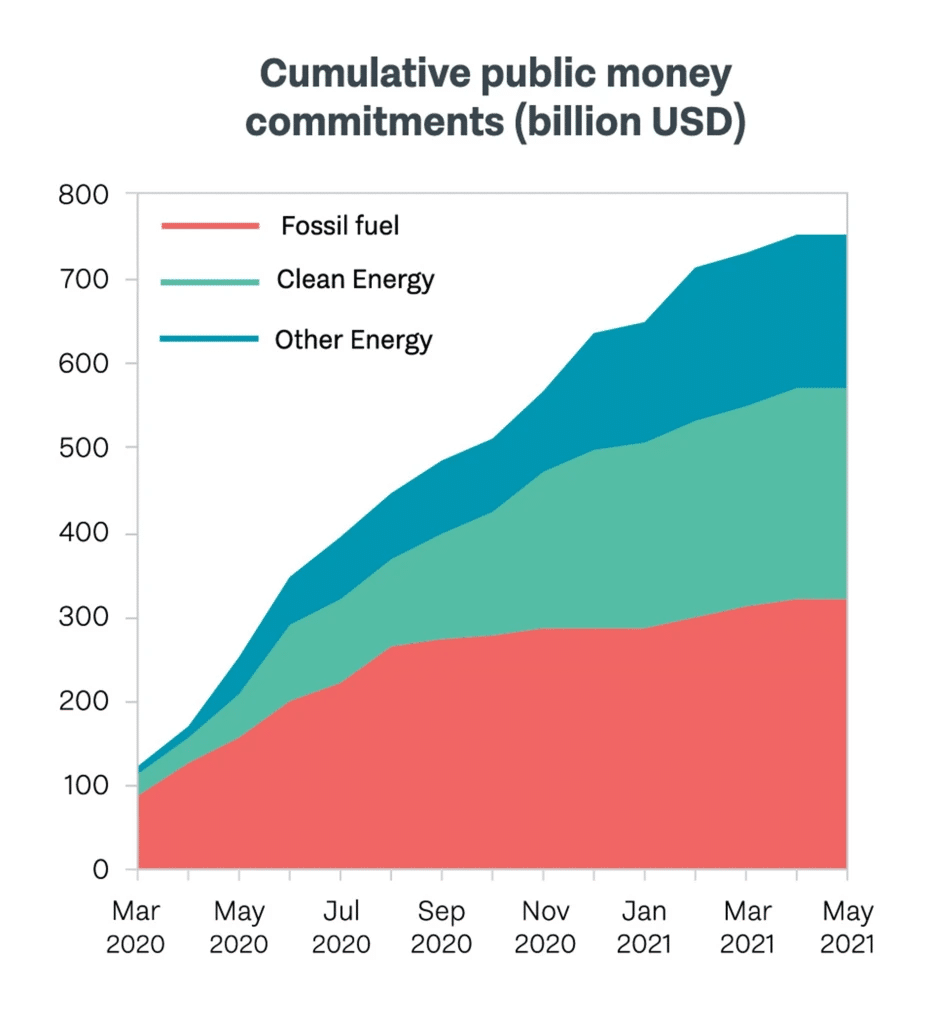 Which countries are to blame for this failure to do anything remotely close to avoiding the environmental disaster.  China is usually picked out as the main culprit. It is currently by far the world’s biggest emitter of CO2 and is planning to build 43 new coal power plants on top of the 1,000 plants already in operation. But China has some excuses. It has the largest population in world and so its per capita emissions are much lower than most other major economies (although it’s the mass that counts). Second, it is the manufacturing centre of the world providing goods for all the rich countries of the Global North. As a result, its emissions are going to be huge because of the consumer demand for its products globally.

Moreover, historically, cumulative emissions built up in the atmosphere in the last 100 years come from the rich previously industrialised and now energy consuming North. There is a direct, linear relationship between the total amount of CO2 released by human activity and the level of warming at the Earth’s surface. Moreover, the timing of a tonne of CO2 being emitted has only a limited impact on the amount of warming it will ultimately cause. This means CO2 emissions from hundreds years ago continue to contribute to the heating of the planet – and current warming is determined by the cumulative total of CO2 emissions over time. 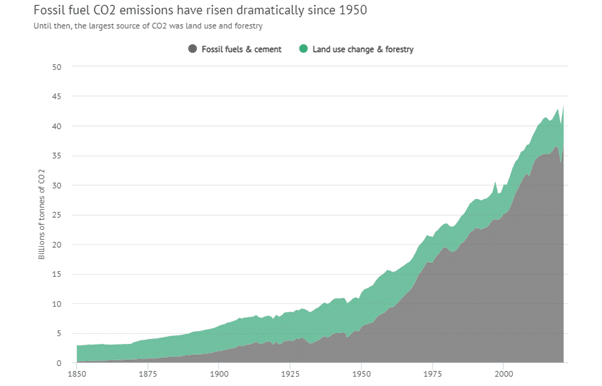 In total, humans have pumped around 2,500bn tonnes of CO2 (GtCO2) into the atmosphere since 1850, leaving less than 500GtCO2 of remaining carbon budget to stay below 1.5C of warming. This means that, as the Glasgow COP26 takes place, the world will collectively have burned through 86% of the carbon budget for a 50-50 probability of staying below 1.5C, or 89% of the budget for a two-thirds likelihood. More than half of all CO2 emissions since 1751 were emitted in the last 30 years. 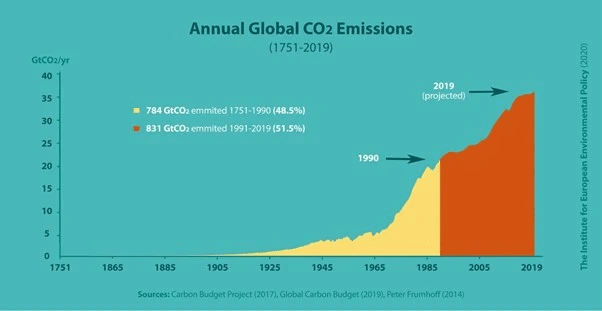 In first place on the historical rankings is the US, which has released more than 509GtCO2 since 1850 and is responsible for the largest share of historical emissions with some 20% of the global total. China is a relatively distant second, with 11%, followed by Russia (7%), Brazil (5%) and Indonesia (4%). The latter pair are among the top 10 largest historical emitters, due to CO2 from their land. 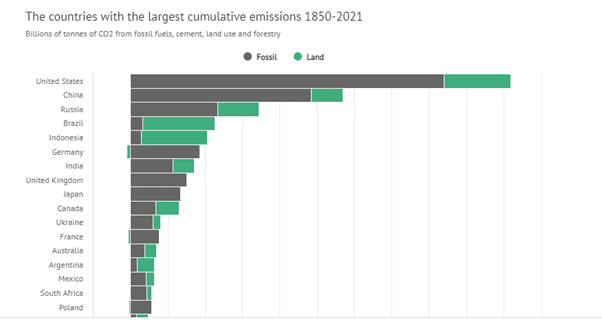 The biggest emitters or consumers of carbon apart from the fossil fuel industry are the richest wealth and income earners in the Global North who have excessive consumption and fly everywhere. It is the military (the biggest sector of carbon consumption). Then there is waste of capitalist production and consumption in autos, aircraft and airlines, shipping, chemicals, bottled water, processed foods, unnecessary pharmaceuticals and so on is directly linked to carbon emissions. Harmful industrial processes like industrial agriculture, industrial fishing, logging, mining and so on are also major global heaters, while the banking industry operates to underwrite and promote all this carbon emission.

And the U.S. is really doing little to control or reduce the fossil fuel industry. On the contrary, crude oil and gas production is rising fast and exploration is being expanded. The Biden administration recently announced plans to open millions of acres for oil and gas that could ultimately result in production of up to 1.1bn barrels of crude oil and 4.4tn cubic feet of fossil gas. Being by far the biggest emitter in history, as well as the world’s number one oil producer, doesn’t seem to embarrass the U.S. while it claims to be a climate leader.

No wonder the governments of the fossil fuel producers and consumers, like Saudi Arabia, Japan and Australia are among those countries asking the UN in Glasgow to play down the need to move rapidly away from fossil fuels; or for paying more to poorer states to move to greener technologies. China may be the world’s largest polluter but it is pledging to bring its emissions to a peak before 2030, and to make the country carbon neutral by 2060. And it is already a renewable energy leader, accounting for about 50% of the world’s growth in renewable energy capacity in 2020. The world’s most populous nation is also out in front on key green technologies such as electric vehicles, batteries and solar power.

Across 40 different areas spanning the power sector, heavy industry, agriculture, transportation, finance and technology, not one is changing quickly enough to avoid 1.5C in global heating beyond pre-industrial times, according to a report by the World Resources Institute.

And yet the cost of phasing out fossil fuel production and expanding renewables is not large. Decarbonizing the world economy is technically and financially feasible.  It would require committing approximately 2.5 percent of global GDP per year to investment spending in areas designed to improve energy efficiency standards across the board (buildings, automobiles, transportation systems, industrial production processes) and to massively expand the availability of clean energy sources for zero emissions to be realized by 2050. The IEA reckons the annual cost has now risen to $4trn a year because of the failure to invest since the Paris COP five years ago. But even that cost is nothing compared to the loss of incomes, employment, lives and living conditions for millions ahead.

But it won’t happen because, to be really effective, the fossil fuel industry would have to be phased out and replaced by clean energy sources. Workers relying for their livelihoods on fossil fuel activity would have to be retrained and diverted into environmentally friendly industries and services. That requires significant public investment and planning on a global scale.

A global plan could steer investments into things society does need, like renewable energy, organic farming, public transportation, public water systems, ecological remediation, public health, quality schools and other currently unmet needs. And it could equalize development the world over by shifting resources out of useless and harmful production in the North and into developing the South, building basic infrastructure, sanitation systems, public schools, health care. At the same time, a global plan could aim to provide equivalent jobs for workers displaced by the retrenchment or closure of unnecessary or harmful industries.

All this would depend first on bringing the fossil fuel companies into public ownership and under democratic control of the people wherever there is fossil fuel production. The energy industry needs to be integrated into a global plan to reduce emissions and expand superior renewable energy technology. This means building renewable energy capacity of 10x the current utility base. That is only possible through planned public investment that transfers the jobs in fossil fuel companies to green technology and environmental companies.

None of this is on the agenda at COP26.