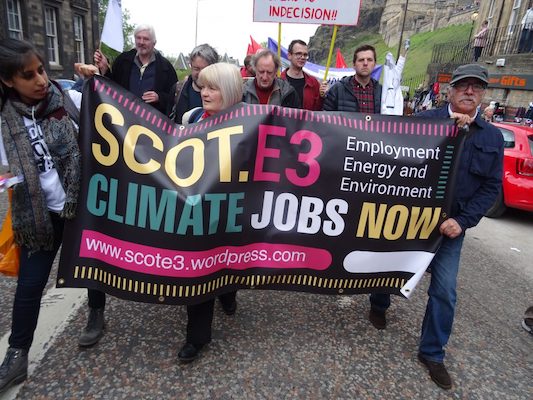 Following the May 21 Scottish elections, the SNP and Greens have been at the helm of Scotland’s government. Both parties profess to being pro-active on climate change and progressive on workers’ rights. Yet the SNP has failed to meet its CO2 emission targets for three years in a row. Its election manifesto included talk of trialling a four-day work week and insisting on fair workplace practices to be considered for government contracts. However, in the run up to COP26, it has found itself facing industrial disputes across public transport and local council workers.

As of 27 October, the industrial action by ScotRail workers that would have paralysed
Scotland’s rail network has been called off after the RMT union reached a one-year agreement. Critically the deal omits the ‘efficiency savings’–management speak for job cuts and intensified working–that ScotRail was demanding. It looks likely that action by Glasgow bin workers and other council staff will go ahead. 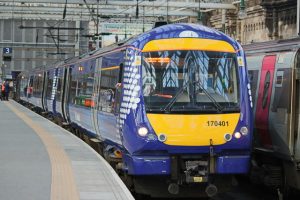 The ScotRail strikes were called off just days before the start of the United Nations climate talks, COP26, in Glasgow. The imperative for the conference is to agree actions that ensure that greenhouse gas emissions (mainly CO2 and methane) are cut rapidly to meet the agreed target of restricting average global temperature increase to 1.5 degrees centigrade.

It’s almost certain that the talks will fail to do this. In 2020, despite reduced economic activity because of lockdown, the concentration of carbon dioxide in the atmosphere rose faster than the average for the previous decade. 2021 is set to see the second biggest ever increase in CO2 emissions. No surprise, since carbon emissions have increased almost every year that COP talks have taken place since the first conference in Berlin in 1995. The aggregate increase in parts per million of CO2 in the atmosphere since 1995 exceeds the total increase over the previous 200 years. A staggering lack of impact that is pushing humanity close to the edge of runaway global heating.

It’s hard to feel hopeful as the leaders of the world meet again. But if the focus is shifted away from the top table meetings it’s clear that significant changes are taking place. The IPCC reports are produced by consensus among scientists from around the world. The physical science section of the latest report was published in August 2021. It highlights the chasm between the reductions in greenhouse gases that need to happen and the reality of continuing increases. Increases that reflect the fact that while investments in renewables have grown, that growth is outstripped by new investments in fossil fuels. The second and third sections of the report were not due for release until 2022 but, in an unprecedented move, scientists have leaked drafts of the texts. Essentially the message is that restricting the average rise in global temperatures to 1.5 degrees by the end of the century is only possible if there are fundamental changes to the way economic and social activity is organised around the world. Quite simply the message is that business as usual, based on the assumption that the market will drive a transition to a low carbon economy, is just not an option.

For many, perhaps most climate activists, the IPCC’s conclusions are old news. It is precisely because of the way in which, year on year, world leaders have jetted into the latest COP and made decisions predicated on the assumption that the market is sacrosanct that so many have concluded that system change is the only answer. The slogan ‘System Change Not Climate Change’ is ever present on climate protests worldwide. But what the slogan means and how the change is achieved is less clear. Will capitalist enterprises respond to ethical imperatives or is state regulation required to force changed behaviour? Can a system driven by profit and capital accumulation ever coexist with a sustainable zero carbon economy? Or do we need a much more fundamental reorganisation of society? And at the same time, given the strength of fossil capital–structured through a century of exploitation of coal and oil and resting on vast resources of wealth and power–where is the power to make this happen?

The beginnings of the answer to the question of the power to change the system are evident in the rise of the school student strike movement around the world and in the mass demonstrations that preceded the global pandemic. But, apart from a moment two decades ago when the turtles and the teamsters marched together, organised workers have largely been absent from the stage. This why the industrial action around the Glasgow COP is so important. Key figures in the movement, including Greta Thunberg, have recognised the importance of working-class action.

For too long, however, the demand for a worker-led just transition has been abstract and disconnected from any sense of working-class agency. While climate activists have promoted the idea, concrete examples of class action have been lacking. So, whilst climate change has moved up the agenda of most trade unions in Britain, the disconnect between economics and broader politics continues to exert an influence over trade union engagement in the climate question. For example, the GMB has turned its back on meaningful action with its support for fracking. It also supports an approach to mixed-energy provision which may appear like a step in the right direction but allows the status quo to continue under the guise of sounding more balanced. Meanwhile Unite, which represents members working in some of the key ecologically damaging sectors, opposes fracking. However, it has often passed sensible-sounding policies around supporting climate jobs while simultaneously limiting their effectiveness by being unable to think beyond the immediacy of job provision, such as its position in favour of Gatwick airport expansion.

Trade unions’ main role, of course, is to defend workers, their jobs and working conditions. However, this has too often led to a narrow focus, and a determination to defend the climate-damaging jobs that in time will simply undermine the very existence of such jobs in the future. Jobs in these polluting sectors have often tended to be more highly skilled, with a history of organisation. They also wield some power within the union structure. Due to their importance in terms of UK manufacturing and output, they have been some of the worst affected by partnership arrangements, which basically attempt to convince workers that their interests align with their bosses. When climate activists see unions acting in this way, it can breed a sense of cynicism, and to regarding those working in these sectors as part of the problem, rather than as key to the solution. However, workers are right to insist that there be meaningful and sustainable jobs for them and future generations. What’s more, increasing numbers of workers within and outside these sectors realise that time is up. These are workers that could and should be at the heart of planning what a real just transition would look like: which skills it could retain and build on, how to transfer them to building a viable future.

Things are changing. Four decades of neo-liberalism have resulted in grotesque levels of inequality. So, for example, lorry drivers’ pay has remained stagnant while working conditions declined, and workloads grew. This is mirrored across society. The accumulated impact of these trends, compounded by the pandemic, is reflected in staff shortages in key sectors from transport to care. In this context workers are starting to organise, take action and win.

Whether or not the anger that these actions represent, and the confidence they engender, can generalise beyond immediate economic demands to grapple with the need for system change depends on the way in which political ideas develop in both the trade union and climate movements. Not least, a worker-led transition requires new forms of organisation at the base and a rejection of employer partnership.

Objectively the conditions are favourable for this to develop. Marxist Ecologist John Bellamy Foster argues that the existential threat posed by the climate crisis can create a revolutionary situation in which the struggle for freedom (from oppression, poverty and more) and the struggle for necessity (survival in the face of climate chaos) coincide. Such a formulation may seem like an impossible step from the action of rail workers and council workers in Scotland–yet building a movement that can achieve system change (necessity) will be one of many steps and reversals–sometimes slow–sometimes rapid.

In order to turn this into a reality, one step is for climate activists to actively lend their
support to striking workers, whether it be the refuse collectors in Glasgow and Brighton, the HGV drivers nationally or bus and rail workers. Supporting road haulage might on the surface seem contradictory to the fight against climate change but ultimately the change we need will come from below, with unity across the struggles being of paramount importance.

Likewise, we need to see trade unionists march with their banners alongside climate
activists at COP26 and beyond. The fights for decent jobs and a decent environment are not in opposition: they are one and the same.

Writing about how neo-liberalism and its consequences can be overturned, Panagiotis Sotiris talks about ‘productive reconstruction’.

We must think of ‘productive reconstruction’ not as ‘a return to growth’ but as a process of transformation and intense confrontation with capital, based upon public ownership, self-management, and forms of workers’ control. It has to be a process of experimentation and learning.

This seems like a pretty good agenda for both the climate and workers’ movements.