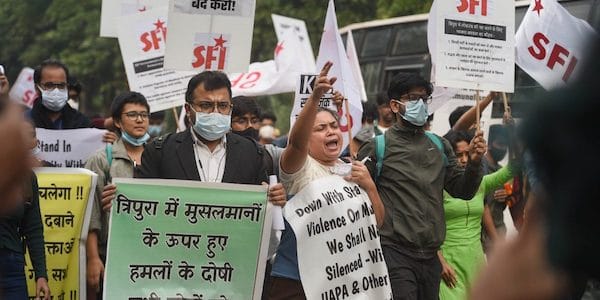 The Tripura Police has booked 102 people under the stringent Unlawful Activities (Prevention) Act for protesting, or even merely mentioning, the recent communal violence in the state’s northern districts on different social media platforms. This latest move reflects the trend of Bharatiya Janata Party-ruled states attempting to criminalise protests.

According to sources in the Tripura Police, cases have been filed against 68 account holders on Twitter, 32 on Facebook, and two on Youtube. The cases, first filed by the West Agartala police station, have now been transferred to the state’s crime branch. These cases come after the state police first booked two Delhi-based lawyers–Ansar Indori and Mukesh–under UAPA charges for participating in an independent fact-finding enquiry into the communal violence in which properties owned by Muslims and mosques were specifically attacked allegedly by far-right Hindutva groups. 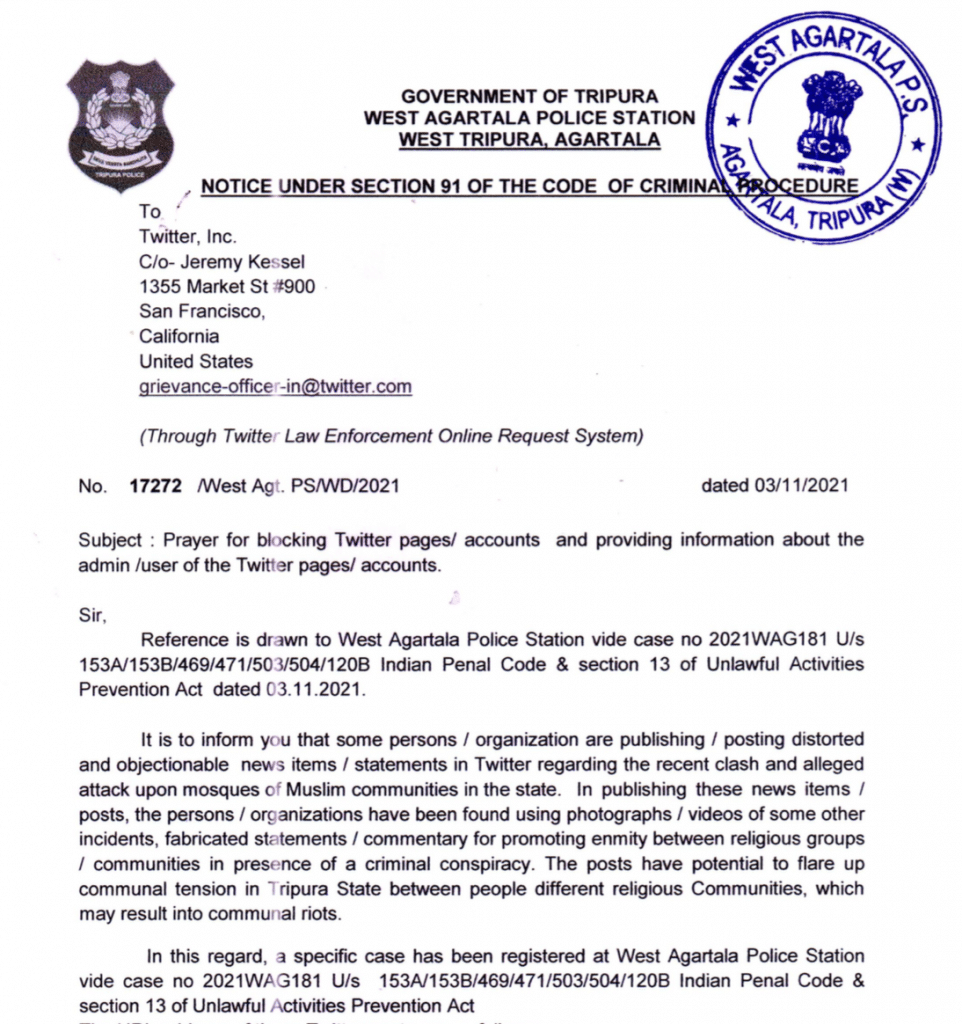 In a letter dated November 3, 2021, the West Agartala police station had initially written to Twitter requesting the social media platform to block at least 68 accounts and provide personal information about them, while divulging that a case under section 13 of the UAPA has been filed against the said accounts holders.

“The posts have potential to flare up communal tension in Tripura State between different religious communities, which may result into communal riots,” the state police’s notice to Twitter said, while alleging that the account holders posted “distorted and objectionable news items/statements regarding the recent clash and alleged attack upon mosques of Muslim communities in the state”.

“In publishing these news items/posts, the persons/organisations have been found using photographs/videos of some other incidents, fabricated statements/ commentary for promoting enmity between religious groups/ communities in presence of a criminal conspiracy,” the notice said, adding that section 13 of UAPA which relates to incitement of an unlawful activity and which is punishable with up to seven years’ imprisonment has been invoked in the said cases.

While it is unclear as of now which 32 accounts on Facebook and two Youtube accounts have been targeted by the police, a number of Twitter accounts among the 68 in question merely condemns the communal violence. Among the 68, many of them are journalists who reported on the violence from their Twitter accounts. Conspicuously, a majority of these appear to be held by Muslims, while only a few are from other communities.

The Wire could not independently verify the content of the posts tweeted by the concerned accounts, nor could it ascertain what according to the state police was “objectionable” or contained “fabricated statements/commentary” that could further fuel communal tension in the state.

In response to the charge, journalist Shyam Meera Singh tweeted to say that UAPA was pressed against him merely for saying “Tripura is burning” on his Twitter handle.

Speaking to The Wire, the PRO of the Tripura Police and assistant inspector-general (Law and Order) Subrata Chakraborty said that UAPA has been invoked keeping in mind the sensitive nature of the issue.

No one has been arrested in the case yet. We have taken cognisance of the social media posts and a case has been filed. I don’t want to make any further comment.

The opposition parties, however, have come forward to condemn what they called state police’s highhandedness. Speaking to The Wire, former Communist Party of India (Marxist) MP Jitendra Chaudhury said that the police action was “unconstitutional and unethical” and goes against the doctrine of civil rights that people of India have been guaranteed by the Indian Constitution.

“It is a fact that Sangh parivar’s activists indulged in violence. There was communal violence in the state. It is natural for sensitive people to respond to it. Pressing the draconian UAPA charges is absolutely ridiculous,” he said, adding that the police action is an attempt to hide the BJP-led state government’s own failures to maintain peace in Tripura.

He said that pressing UAPA charges against dissenters would aggravate the already volatile situation in the state, and what the state police have done will prove to be “counter-productive” as the action will lead to further incitement. He added that fact-finding team members who are currently facing similar UAPA charges were in the state to learn about the reality of the state, not to “disrupt peace and harmony” as claimed by the state police.

What the state police have done reminds me of the British regime. If the state police wanted to challenge these people, they could have done that by invoking different sections of IPC. We condemn such police action and demand that such charges should be immediately withdrawn.

Similarly, The Indigenous Progressive Regional Alliance (TIPRA) head Pradyot Deb Barma told The Wire that the police action smacks of “a colonial mindset” and “does not go with the spirit of democracy”.

“I think while freedom of expression can’t be absolute, it can’t be to suit somebody’s political agenda. I think the government should be mature and ignore certain comments,” he said.

“The state government should also take action against those, in this case the Vishwa Hindu Parishad and other fringe activists, who came out in rallies to shout communal slogans against a particular religion, if it is filing cases against those who are responding to such incitement. Law should be fair to all,” he added.

As The Wire has reported, videos showing vandalism by alleged VHP members had gone viral on social media and people who were part of such rallies could be heard chanting anti-Muslim slogans like “Tripura me Mullagiri nahi chalega, nahi chalega” and “Oh Mohammad tera baap, Hare Krishna Hare Ram”.

Trinamool Congress’s state in-charge Sushmita Dev said that the state action against the fact-finding committee and those who raise their voice against communal violence resembles what the BJP calls “the Gujarat model”.

“It is very simple. The fact-finding committees which various organisations send, including the political ones, are a democratic right. The people who are affected are saying that there has been violence. Tripura Police is consistently saying that it is false news. The moment there is a contradiction about something that is a question of fact, provided you don’t disturb peace, everyone has the right to go to the affected areas. If the Tripura Police is confident that everything is alright, they should allow people to go to the affected areas,” Dev told The Wire.

She said that if anybody was giving false information, then UAPA could be applied, but fact-finding committees can’t come under the stringent Act. “I can’t even visit (the affected areas). If I step out of Agartala, they (the police) are willing to beat me up. I wrote to the government that I should be given security because I am willing to go there. Even a Congress team went there. So why have they not filed a case against Congress?” she said.