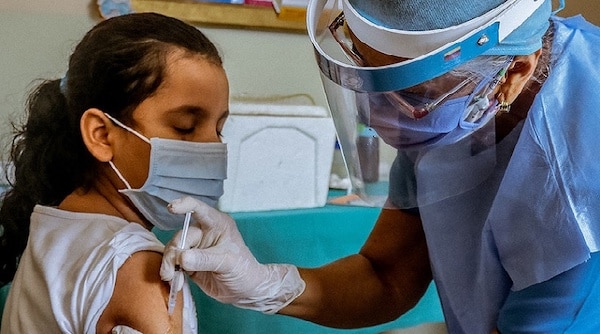 Venezuela has recently joined the list of the few countries that are vaccinating children from the age of twelve. (Photo: Venezuelan Health Ministry)

Venezuelan vice-president Delcy Rodríguez, on October 31, reported that the country had successfully vaccinated 67% of its population against COVID-19. Rodríguez further reported that in some states, the figure had exceeded 70%, the country’s initial target set to be achieved by the end of the year.

“Together we are advancing in the mass immunization of the people. To date, Venezuela reaches 67% vaccination rate of the population, and 9 states, such as Táchira, Caracas and La Guaira, have exceeded the goal of 70% of immunized people. We are on track to achieve the (new) goal of vaccinating 95% of Venezuelans in 2021,” she wrote in a tweet.

On October 24, President Nicolás Maduro, while presenting the evaluation of the country’s fight against the pandemic, celebrated the vaccination of 56% of the population and hoped “to reach the goal of 70% by October 31.” He reported that the country had already procured “vaccines for 85% of the population” and that its “big goal is to vaccinate 95% of the citizens by December 31.”

The head of state also reported that to achieve this goal, more vaccination centers would be opened. In this regard, he announced that he accepted Rodríguez’s proposal to incorporate shopping centers, pharmacies and public places in the expansion plan, in addition to beginning door-to-door vaccination and vaccination at high schools.

Presently, there are over 858 fully equipped vaccination centers installed across the country. The government plans to open at least 200 new centers.

Nevertheless, despite the illegal commercial, economic, and financial sanctions against Venezuela imposed by the United States, supported by the European Union and the U.S.’ allied countries in Latin America, the socialist government led by President Maduro not only managed to secure anti-COVID-19 vaccines, but also successfully fought the pandemic, guaranteeing full treatment to all COVID-19 patients. According to the official data, Venezuela maintains a recovery rate of 95%, with a total of 407,151 cases and 4,891 deaths from the disease.

Recently, Venezuela joined the list of the few countries that are vaccinating children. On October 27, health minister Carlos Alvarado González reported that “currently there are 113,000 young people over 12 years of age, who have been vaccinated as of today.” Alvarado added that since face-to-face classes had resumed, “the goal is to progressively reach 5,000 public and private schools” to vaccinate all children.