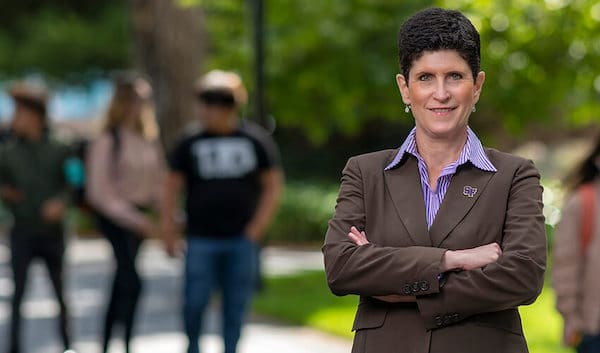 Editor’s Note: The following press release was issued on November 4, 2021 by the International Campaign to Defend Professor Rabab Abdulhadi. The press release comes as San Francisco State President Lynn Mahoney overturned the decision of a campus panel that ruled the school failed to protect Professors Rabab Abdulhadi and Tomomi Kinukawa from censorship when Zoom, Facebook, and YouTube denied their services for an event featuring Leila Khaled. For more on this story see here. Mondoweiss occasionally publishes press releases and statements from organizations in an effort to draw attention to overlooked issues.

In an outrageous and insulting decision, President Lynn Mahoney of SFSU has disregarded the legitimate reprimand of a faculty panel that recommended redress to Dr. Rabab Abdulhadi, founding director of the Arab and Muslim Ethnicities and Diasporas Studies (AMED) program, for the University’s failure regarding violations of Professor Abdulhadi’s and her colleague Professor Tomomi Kinukawa’s academic freedom.

President Mahoney’s decision upholds the University’s corporatized acceptance of Big Tech’s increasing control over academic discussion and its complicity with Zionist organizations that stifles all discourse on issues of human rights and dignity for the Palestinian people.

The President’s decision follows a ruling by the faculty member panel based on a six hour hearing following the arbitrary cancellation by Zoom and other social media outlets of Drs. Abdulhadi and Kinukawa’s online open classroom, “Whose Narratives? Gender, Justice and Resistance: A Conversation with Leila Khaled.” The University is bound by contract, law and AAUP policy to protect academic freedom rather than subcontracting the responsibility to private companies. Further, universities must maintain structural independence from the whims and demands of partisan lobbying organizations, including Zionist groups like the Academic Engagement Network (AEN) and the Lawfare Project.

In its ruling, now vetoed by President Mahoney, the faculty panel affirmed that: “San Francisco State University has inflicted harm upon Dr. Abdulhadi (and co-instructor, Dr. Kinukawa) and that her academic freedom was, in fact, violated. We characterize this harm in two ways: 1) that the university did not provide adequate support to Dr. Abdulhadi against the actions of the corporate entity, Zoom, and, more importantly against the outside organization, Lawfare Project.” Furthermore, the panel ordered the university to provide remedy in the form of a public apology to Dr. Abdulhadi and to provide “a site for rescheduling the event with Leila Khaled on an alternate platform, without interference”.

Clearly, with this decision, SFSU is continuing its policy of harassment of Dr. Abdulhadi, intensifying its efforts to dismantle the AMED program, and confirming its complicity with Zionist organizations that seek to silence Palestinian voices on campuses across the country as Israel has pursued against Palestinian human rights organizations. SFSU’s lip service to academic freedom flies in the face of limiting Palestinian speech in favor of an overriding concern for its corporate bottom line.

As with this week’s criminalization of 6 legitimate Palestinian human rights organizations by the Israeli government, SFSU chose to follow the Zionist playbook of demonizing all actions in support of Palestinian liberation and teaching about Palestine as “terrorism” and “anti-Semitic”.

President Mahoney’s decision was written by Ingrid Williams, Vice President of Human Resources. According to University by-law, the President’s veto will trigger an automatic and independent arbitration hearing for a final decision on Dr. Abdulhadi’s grievance.