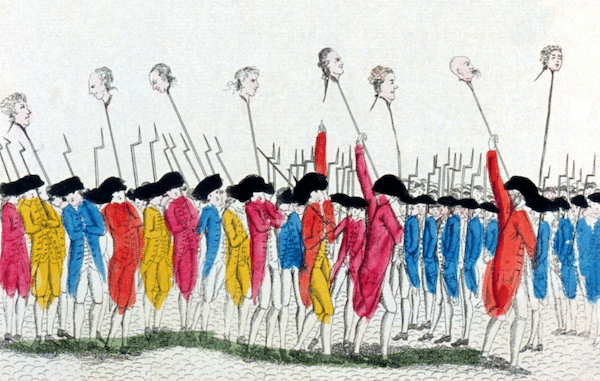 Storming the Bastille – This is how we punish traitors

A funny thing happened on the way to the recovery from the Pandemic Depression: class conflict is back at the core of economics.

At least, that’s what Martin Sandau (ht: bn) thinks. I beg to differ. But more on that anon. First, let us give Sandau his due. His argument is that the current labor shortages have shifted the balance of power toward workers (an issue I discussed a couple of weeks ago). As a result, economic analysis is starting to change:

What this looks like is the return of something that was exiled from centrist policy debate and mainstream economic analysis for decades: class conflict and its economic consequences. To be precise, we may be witnessing the manifestation of two outmoded ideas: that the relative power of economic classes alters macroeconomic outcomes; and that macroeconomic policy tilts that relative power.

For Sandau, that means a return to the work of Michal Kalecki, especially his theory of the “political aspects of full employment.” Kalecki was a contemporary of John Maynard Keynes but, in contrast to Keynes, Kalecki was well versed in Marxian theory and spent considerable time investigating the relationship between macroeconomics and class conflict. As I explained back in 2010, Kalecki developed a cogent analysis of business opposition to measures designed to achieve full employment:

Under a regime of permanent full employment, the ‘sack’ would cease to play its role as a disciplinary measure. The social position of the boss would be undermined, and the self-assurance and class-consciousness of the working class would grow. Strikes for wage increases and improvements in conditions of work would create political tension. It is true that profits would be higher under a regime of full employment than they are on the average under laissez-faire; and even the rise in wage rates resulting from the stronger bargaining power of the workers is less likely to reduce profits than to increase prices, and thus adversely affects only the rentier interests. But ‘discipline in the factories’ and ‘political stability’ are more appreciated than profits by business leaders. Their class instinct tells them that lasting full employment is unsound from their point of view, and that unemployment is an integral part of the ‘normal’ capitalist system.

As readers can clearly see, not much has changed since Kalecki published that analysis back in 1943. Employers and their financial backers are still adamantly opposed to government measures designed to move capitalist economies toward full employment.

Sandau is correct in arguing that “conventional economic thinking has little room” for the possibilities outlined by Kalecki. Mainstream economists assume that, when the labor market is in equilibrium (at A), workers are paid a wage

equal to their contribution to production. If workers manage to receive wages higher than the equilibrium rate, the result will be unemployment—that is, the improvement in the situation of some workers will come at the expense of other workers. So, there can’t be class conflict within conventional economic thinking.

And there isn’t any class conflict in Sandau’s analysis. That’s because, if workers’ wages rise, capital can respond by raising productivity. Therefore, in his view, “productivity incentives from greater worker power can boost profits as well.”

What Sandau fails to see is that, as productivity increases, the prices of wage goods fall, and capital therefore needs to advance less money to purchase workers’ ability to labor. Capitalist profits rise precisely because the value of labor power falls. Within the confines of capitalism, that’s precisely the option capitalists have, to extract more surplus-value from the workers they employ.

That’s the class conflict that remains missing in Sandau’s analysis as in the rest of conventional economics.