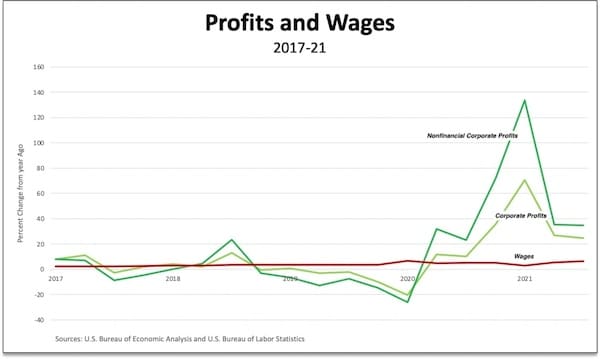 Everyone knows that inflation in the United States is increasing. Anyone who has read the news, or for that matter has gone shopping lately. Prices are rising at the fastest rate in decades. The Consumer Price Index rose 8.6 percent in March, which is the highest rate of increase since December 1981 (when it was 8.9 percent).

Clearly, inflation is hurting lots of people—especially the elderly living on fixed incomes and workers whose wages aren’t keeping up the price increases. No mystery there.

The only real mystery is, what’s causing the current inflation? That’s where things gets interesting.

To listen to or read mainstream economists the answer to the whodunnit is workers’ wages. They’re going up too fast, because the level of unemployment is too low and their employers are forced to pay them higher wages. As a result, corporations are compelled to raise their prices. Therefore, something has to be done (like increasing interest rates) to slow down the economy and force more workers into the Reserve Army of the Underemployed and Unemployed.*

This excess wage growth probably won’t recede until the demand for workers falls back into line with the available supply, which probably–I hate to say this–means that we need to see unemployment tick up at least a bit.

The amazing thing about Krugman’s story, and that of most mainstream economists, is there’s not a single word about profits. Corporate profits are entirely missing from their story. Inflation is only caused by workers’ wages, not the surplus raked in by U.S. corporations. Which is pretty amazing, given the numbers.

A quick look at the chart at the top of the post shows what’s been going on in the U.S. economy. Workers’s wages (the red line in the chart, the hourly wages of production and nonsupervisory workers) rose during 2021 at an annual average rate of less than 5 percent (ranging from 2.8 percent in the second quarter to 6.4 percent in the final quarter).

And profits? Well, they’ve been growing at astounding rates, magnitudes more than wages. Corporate profits (the light green line) rose during 2021 at an average rate of 40 percent, and the profits of nonfinancial corporations (the dark green line) expanded by even more: 69 percent!

The fact that profits are entirely missing from the mainstream story about inflation reveals a fundamental problem within mainstream economic theories. On one hand, in their macroeconomics, wages and not profits are always the culprit. That’s because they only have a labor market, and not a capital market (much less a profit rate or, for that matter, a rate of surplus-value), when they analyze fluctuations in prices and output. It’s as if corporate profits are only a residual—what is left over in the difference between wages and wage-driven prices. On the other hand, in their microeconomics, profits represent the return to capital, and thus a key component of commodity prices as well as the driver of economic growth.

Such “capital fetishism” means that profits as the return to a thing, capital, play an important role in the mainstream theory of value but then disappear entirely in the macroeconomic story about inflation.

It’s therefore a problem in the basic theories of mainstream economics. And it’s a problem when it comes to their economic policies: anything and everything must be done to keep workers’ wages in check, and (without ever mentioning them) to safeguard corporate profits.

The fact is, once we solve the mystery of the missing profits we can actually tackle the problem of inflation. But neither mainstream economists nor the leaders of corporate America are going to like what we come up with.

*The Federal Reserve is suggesting that it can raise interest rates to get prices down “without causing a recession.” In fact, according to research from the investment bank Piper Sandler, the Fed raised rates to combat inflation nine different times during the past 60 years, and on eight of those occasions a recession occurred not long after.