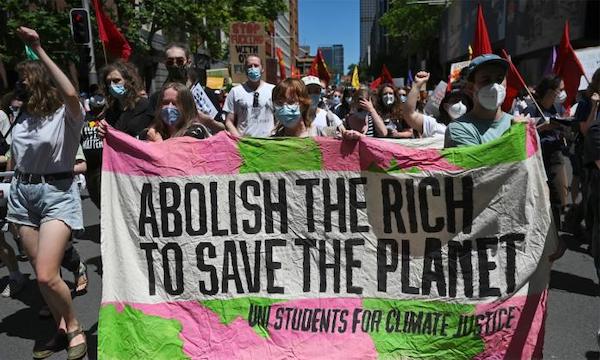 Early in the COVID-19 pandemic, when people were first experiencing the “distancing effect” of lockdowns, the world had something of a cultural moment centred on the idea that we should “build back better”. The simple—and entirely sensible—proposal was that we should use the period of enforced social isolation to reflect critically on the status quo and consider how, instead of returning to normal after the pandemic, we could try to build a better, more equal and sustainable society.

The idea of “building back better” took off. Since it was first raised as a slogan back in March and April 2020—initially mainly in the world of progressive NGOs and “left” Twitter—it has been taken up by everyone from U.S. President Joe Biden and British Prime Minister Boris Johnson to the OECD, the United Nations and the NSW Public Service Commission.

The popularity of “build back better” as a slogan reflects that no-one in their right mind would be overly enthused by the idea of “building back the same”. Why, having been jolted for a moment out of our immersion in the ugly reality of a capitalist system piling one crisis on top of another, would we want everything to go back to being just as it was before?

When the pandemic hit Australia in late February last year, we were just emerging from the “black summer” of devastating bushfires. It would be strange, in that context, if anyone much wanted merely to get back to the kind of capitalist normality that devoured so much of Australia in flames, or to get busy rebuilding an economy that was sacrificing, in ever more obscene and blatant ways, the interests of the majority of poor and working-class people to the greed of the rich.

Globally, the obscenities of capitalist normality were even more extreme. Who would want to go back to a world in which total annual military spending was almost US$2 trillion—one in which countries everywhere, led by major powers like the U.S., were competing to ensure their stockpile of deadly weapons and new technologies of mass murder were built up faster than those of their rivals? Who would want a world in which the number of forcibly displaced people had doubled in less than a decade, and in which an estimated 25 million refugees faced increasingly brutal treatment from governments determined to deny them any hope of resettlement? Who would want to “build back” to a world in which millions were dying from hunger every year?

No matter how popular the idea of “building back better” became as a slogan, however, it was unlikely that anything much would change unless we fought for it. More than a year and a half on, the pandemic continues to rage along its deadly course, with no end in sight. In June 2020, the average (official) daily death toll from COVID-19 was fewer than 5,000. In October this year, it was around 7,000. In the meantime, governments around the world have been more or less successful in convincing people that we should accept this ongoing burden of death and disease as part of the “new normal”.

On top of the ongoing suffering inflicted by the pandemic, we’re seeing a return of all the old social, economic and environmental ills that we were supposedly going to “build back better” from. COP26 is a marker of that depressing reality. The sight of world leaders gathering in Glasgow to engage in what Greta Thunberg aptly described as a “global North greenwashing festival” and “a two-week celebration of business as usual and blah, blah, blah” shows the extent to which the normal, pre-pandemic functioning of global capitalism has returned.

“Nature is healing”, as the saying goes—but in this case it’s the “nature” of a system that is rapidly destroying the planet on which we depend so that the fossil fuel industry and other big business interests can go on more or less in the manner to which they’ve grown accustomed. Reflecting the lack of any shift away from the pre-pandemic “normal” on climate, global emissions are, according to the Global Carbon Project, set to rise nearly 5 percent this year—almost completely wiping out the 5.4 percent drop recorded in 2020 due to lockdowns and associated restrictions on travel and other emissions-intensive activities.

And when it comes to greenhouse gases in the atmosphere, the pandemic had no impact at all. According to the latest Greenhouse Gas Bulletin from the World Meteorological Organization, concentrations of carbon dioxide in the atmosphere hit a new high of 413.2 parts per million (ppm) in 2020—a rise of 2.5 ppm from 2019, slightly above the average annual increase of 2.4 ppm over the past decade.

On every other issue, it’s the same story. Instead of a fairer and more equitable distribution of society’s wealth, we’ve got a return to the most naked and brutal inequality. Welfare in Australia and elsewhere—raised in the early period of the pandemic as part of government stimulus packages—has been slashed back down close, or equal, to pre-pandemic levels. Meanwhile, inflation is rising in many countries, outstripping sluggish wage growth and eating into living standards. There’s been a lot of talk, in the past two years, about the value of “essential workers”. But when it has come to actually paying those workers more, it’s a different story.

At the same time, the wealthiest section of society has never had it so good. Big businesses, along with anyone with a significant share and/or property portfolio, have done very well out of government stimulus measures targeting the top end of town. According to the 2021 Australian Financial Review Rich List, Australia’s richest 200 individuals and families increased their collective wealth by $55.6 billion in the first year of the pandemic—rising from $424 billion to $479.6 billion. Since 2019, Gina Rinehart’s wealth alone has risen by $17 billion (from $13.8 billion to $31 billion)—enough to pay the annual salaries of 232,876 nurses.

Ultra-low interest rates have also contributed to an unprecedented property boom. Sydney’s median house price is approaching $1.5 million, having risen by more than 30 percent in the past 12 months. That equates to an increase of $6,700 a week, or $967 a day. Property investors are laughing all the way to the bank. But for young and working-class people who don’t have wealthy parents to support them, the prospect of ever owning a home is rapidly disappearing over the horizon.

Adding to the deep anxieties felt by so many is the increasing threat of war. Instead of more global cooperation on issues of common concern (another popular inclusion in various “build back better” lists), the world of geopolitics is more fractious than it has been for decades. At the centre of it all is the growing drive by the U.S. and its allies for war with China.

The Australian media have made much of the claim that Prime Minister Scott Morrison lied to French President Emmanuel Macron about the submarines deal. It’s a classic case of not seeing the wood for the trees. The big problem facing Australians isn’t that we’re led by a lying clown like Morrison—in this day and age, being led by lying clowns is to be expected—but that we’re led by one who is loudly beating the drums for a potential Third World War.

How long can it go on like this? The short answer is: as long as we let it. Nothing will change while the widespread public opposition to the destructive status quo of capitalism is expressed merely through “calling on” world leaders to do this or that. No number of comment pieces, tweets or glossy brochures about how we should “build back better” is actually going to make it happen. All that’s likely to occur is what has, in fact, transpired. Those in power will take the slogan and turn it into a meaningless catchphrase designed—just like all the “net zero by 2050” talk—to rebrand, rather than actually change, the existing system.

The Australian government hasn’t—as a recent article by Marian Wilkinson in the Saturday Paper argued—been “captured” by the gas lobby or any other particular big business interests. The Australian government, and this applies whether it’s the Liberals or Labor in power, isn’t a neutral body that can easily be influenced this way or that. “The executive of the modern state”, as Marx wrote in the Communist Manifesto, “is but a committee for managing the common affairs of the whole bourgeoisie”. The government isn’t the hostage, but the hostage-taker. It is working hand in glove with big business and the rich to hold the rest of society captive to their interests.

To really start to “build back better”, whether on climate change, inequality, war or anything else, we need first to rid ourselves of any remaining illusions that those holding us hostage within the death machine of global capitalism can be convinced to drive the radical change we need. “When the rulers have spoken”, German poet and playwright Bertolt Brecht wrote,

then the ruled will start to speak.