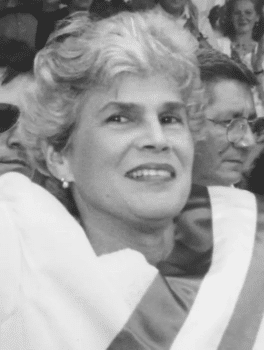 In the lead up to the February 25, 1990 elections, President George H.W. Bush told the Nicaraguan people that the U.S. would keep funding the Contras (counter-revolutionaries recruited, funded and directed by President Reagan, the State Department and the CIA in 1980s illegal war), block loans and maintain the brutal economic blockade where Nicaragua couldn’t even get medicine or parts for an x-ray machine.

Although half a million people came out to show support for the Sandinista National Liberation Front (FSLN) days before the vote, the FSLN lost to the U.S. hand-picked candidate, Violetta Chamorro, because of the blackmail and coercion.

With the election result, Nicaragua turned over power effectively, to the U.S., which imposed 17 years of neoliberal austerity. Just about everything was privatized, leading to a reversal of social gains like the glass of milk for children program.

Thousands of people joined the ranks of the unemployed, tried to migrate to the U.S., or went to the cemetery before their time.

This is exactly what the U.S. has again attempted: Brutal sanctions in the form of the 2018 Nica act; and days before the election the State Department pushed a new package of sanctions called RENACER through Congress—screaming to the Nicaraguan people: “you vote Sandinista and we will make your lives hell.” 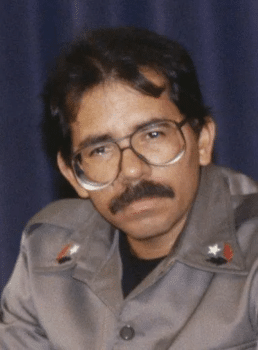 U.S. agents inside and outside Nicaragua and foreign leaders like the president of Costa Rica, Carlos Alvarado Quesada, told Nicaraguans to boycott Sunday’s election and not to vote.

This message came through to Nicaraguans on all the media created and funded by the United States since the Sandinistas returned to the presidency in 2007.  In the weeks and months before the November 7 vote, the U.S. government and its media echo chamber continued to spread misinformation about Ortega and the FSLN to create the idea that the vote would not be fair.

The Constitutional Liberal Party placed second, like in the 2016 elections, with 14.15%; the rest of the vote was spread among the other four parties.

The Sandinistas (2.1 million card-carrying in a country of 6.3 million) danced in the streets all night long throughout the country to celebrate their victory. 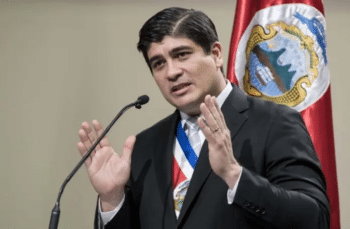 Polling Station minutes were pasted on the wall of the school, so people know the results almost immediately.

After the election results were announced, U.S. Secretary of State Antony Blinken released a statement condemning the subversion of democratic norms in Nicaragua and pointing to repression and electoral manipulation by Ortega.

Previously, Blinken had accused Ortega of orchestrating a “sham election” and seeking to establish with his wife, Rosario Murillo, an “authoritarian dynasty.”

Blinken in turn vowed to “use coordinated actions with regional allies, sanctions and visa restrictions” in order to “promote accountability for those complicit in supporting the Ortega-Murillo government’s undemocratic acts.” 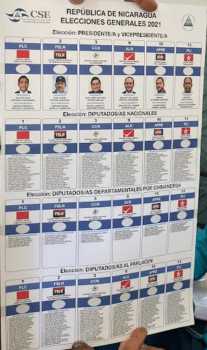 These comments point to a longstanding effort by the U.S. government to destroy the Sandinistas.1

The U.S. is actually the one which has subverted democratic norms by pumping in money to opposition groups through the National Endowment for Democracy (NED)—a CIA offshoot.

In 2018, the U.S. used cyberwar to launch a coup against the FSLN—through bott farms in Miami and El Salvador.

In the first few days of the coup attempt, millions of messages saying the government and police were repressing students flooded Facebook—total lies.

When protests erupted, the first three deaths were caused by the opposition—a policeman, a young Sandinista defending the Tipitapa mayor’s office and a passerby.

But many people believed the robotic disinformation—social media is powerful.

Since then, many Sandinista citizens have learned well how to use social media to defend the truth about the advances of their revolution. 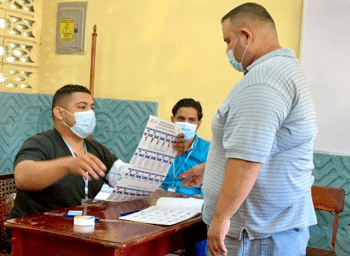 So, the State Department joined forces with META—the company that owns Facebook, Instagram, and others. They disappeared the personal accounts of nearly 1,000 Sandinistas as well as dozens of pages of digital communicators.

This was to silence the Sandinistas in the last days before the election and turn people against the FSLN. Dr. Timothy Bood, who covered the elections in Nicaragua, was blocked from Facebook for three days for giving his opinion about the U.S. attempted coup in 2018:

I was in León—one of the historic colonial cities which houses the country’s first university and its most famous cathedral. 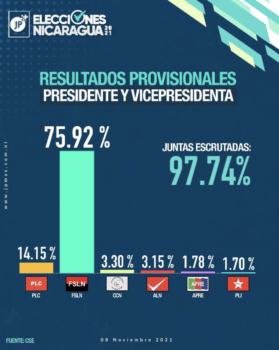 The Sandinistas (2.1 million card-carrying in a country of 6.3 million) [Photo: Nan McCurdy]

I visited some 70 polling stations in 5 Voting Centers—all schools. Election day was a very peaceful day—kids were in the parks—and young adults were playing basketball. The police didn’t report even one violent incident in the whole country.

Nicaragua’s electoral process is very well organized with about 245,000 people volunteering to make the elections come off without a hitch. Every party has the right to have a poll watcher—a party election observer—in every one of the 13,459 polling stations.

Each station has a voting board of three people (president, first and second member) from different parties who run the election on the micro level. A voter enters, shows their official ID card—they find her on the voting rolls, then they find her on another page with her name and picture and she signs there.

As we were leaving one of the Voting Centers, I started talking to two young men who told me that together with two other friends they made a Facebook Page called La Consigna. Their page was eliminated a week before the elections. 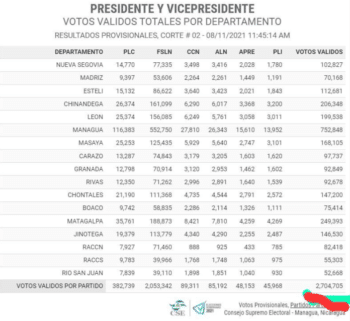 They have been able to re-establish it—unlike many people who tell me that they have not been able to make new accounts. Writer Roger Harris was with me and he asked if they are paid by the government—they cracked up!

They explained that after the attempted coup they wanted to establish a page to defend the revolution and share all the advances the county has in health, education, recreation, food sovereignty, infrastructure, etc.

When I looked for La Consigna on Facebook; I scrolled down and they had a picture of our group of U.S. journalists and others covering the elections!

As we left they asked us to tell people in the U.S. that Nicaraguans just want to be left alone to live in peace. 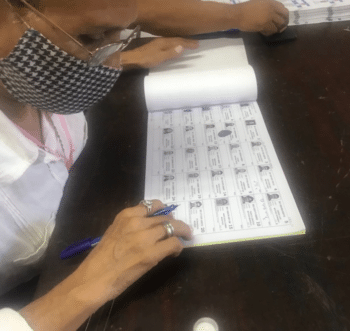 Secretary of State Blinken claims the Sandinistas have no mandate to govern—however the voter turnout rate of 65 percent on Sunday was much higher than the total for the U.S. election—and the 76% victory tally much higher than the vote garnered by the Democratic Party.

It’s hard to imagine in fact how a government could have a greater mandate!

Today, November 7, … we are holding these elections and we are sure that in this battle, which is a historic battle where we have to decide between … confrontation, war or peace, we are sure that regardless of the political, ideological, religious thought of each one, there are different parties to choose from, and in this way we are burying war and giving life to peace.

On November 7, most Nicaraguans voted to continue with the amazing advances they have enjoyed since 2007, building a country that has become a very good example for others—despite the ongoing U.S. bullying and war through sanctions.

Nan McCurdy works for the United Methodist Church of the U.S., currently in the state of Puebla, Mexico. She lived in Nicaragua more than thirty years.