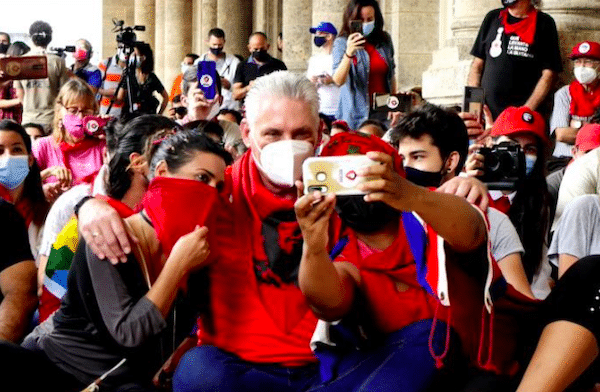 “I am grateful to be able to spend a bit of my Sunday with you,” President Miguel Díaz-Canel Bermúdez said to the young and not so young crowd camping out in Havana’s Central Park for more than 48 hours, in what they have called the Sit-in of the Red Bandanas.

This is an anti-imperialist, ecumenical action, he noted, with a red bandana around his neck, after enjoying a concert by Tony Avila, sitting on the floor with more than a hundred others in the portico of Alicia Alonso Theater, where the activity was moved as rain began.

“We are seeking the improvement of our society, defending emancipation, defending socialism and condemning campaigns to subvert our internal order and media campaigns against Cuba, as you are advocating here,” the President commented speaking with the press.

“And Cuba is going to live in peace, and living in peace we are going to improve,” reiterated the President, to shouts of Viva Cuba, Long Live the Revolution, Long Live the Youth, and Homeland or Death, Venceremos! (We will win!)

He was welcomed by participants at the sit-in with affection and support, in the midst of a fierce media campaign against him.

Manu Pineda, a Spanish member of parliament who also participated, captured the significance of the President’s presence, commenting to the press:

As a dictator he is suspended, as a dictator he leaves much to be desired. In a gathering of young people who came out to listen to music, to a concert, the President goes right in among the youth… He is not afraid of the people, it looks like he sees the people as a support, far from being a danger, and like he is here at the service of his people.

This is an example, he stated, that cannot be seen in many places. This explosion of joy, this coexistence, this fraternity, with the President coming out among the people, “If this people is repressed, the truth is they conceal it very well,” he joked.