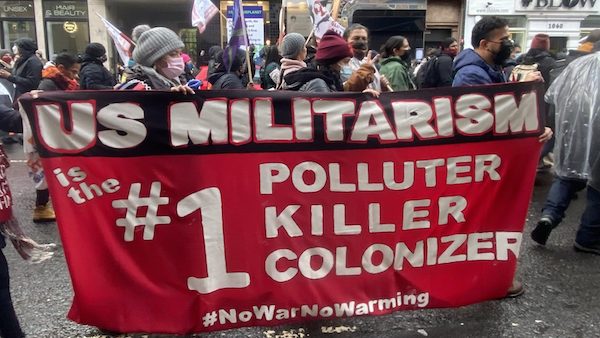 Peace and environmental activists brought the question of the role of the military in causing climate change to the fore even while it was ignored by the official COP26 summit. (Photo: Abby Martin)

Despite the global military industrial complex being one of the single largest contributors to climate devastation, there was almost zero discussion of the military in the official COP26 summit that concluded on November 12. Peace and environmental activists have called this unspoken truth the elephant in the room and pointed out that unless the world makes a serious commitment to peace and demilitarization, it will be impossible to meet emission cap targets and slow the advance of climate change.

According to research done by Dr. Stuart Parkinson of the U.S.-based organization Scientists for Global Responsibility (SGR), the total carbon footprint of the U.S. military adds up to 205 million tons, while that of the United Kingdom is 11 million tons. These numbers come from meticulous research and data compiling by organizations such as SGR and others, because comprehensive data on the subject is not available.

The lack of data on military carbon footprint is primarily due to the fact that existing United Nations climate conventions and agreements do not require militaries to meet any emissions targets nor report on the extent of emissions. In some cases, emissions from a foreign military base, like one of the United States’ 800+ bases around the world, get counted into the host country’s total.

The significant omission was highlighted by journalists, activists, and academics during the COP26 proceedings. Organizations such as the U.S.-based peace group CODEPINK organized a series of actions and events during the parallel ‘People’s Summit for Climate Justice’ to shed light on this crucial issue and to demand that world leaders respond.

Another reason the military is often overlooked in discussions of the primary actors responsible for greenhouse gas emissions, destruction of the environment and biodiversity, and other processes that have driven our planet into crisis, is the limited understanding of its actions, which is by design.

Due to the covert nature of warlike conflicts in the 21st century, as well as that of the arms industry, many people in global north countries are unaware of what goes into maintaining and producing the complex of troops, bases, supplies and military armament, and of course the impact of these actions like ground deployment, bombings, drone strikes, and others.

As presented by Dr. Stuart Parkinson in the discussion “Challenging the Military Carbon Bootprint” organized by CODEPINK during the People’s COP26 Summit in Glasgow, the elements of the military’s impact on the environment are vast. They include: the direct impact of war (bombing campaigns, drone strikes, shootings) on the environment which could range from destruction of oil infrastructure, agriculture, ecosystems, deforestation, etc.; the production processes and supply chain for the military tech industry, as well as other necessary goods like food, uniforms, etc.; the use of military equipment such as aircraft, tankers, and more in exercises, patrols, and in war; the maintenance and establishment of the vast network of military bases which includes waste management, supplies, and alteration of the landscape; and other production, distribution, and processes that are part of the vast war machine.

Journalist Abby Martin of Empire Files who was inside the “blue zone” of COP26 asked several U.S. politicians about why both Democrats and Republicans have continued to funnel millions into the Pentagon, which is a bigger polluter than 140 countries combined.

Martin asked House of Representatives Speaker Nancy Pelosi: “How can we seriously talk about net zero if there is bipartisan consensus to constantly expand this large contributor to climate change which is exempt from these conferences, [the] military is exempt from climate talks.” Pelosi’s response to Martin was telling. She said that the climate crisis is a national security matter as it provokes migration and conflict over land and resources, implying that it is necessary to maintain a large defense budget to ensure that the U.S. is able to manage the impact of climate change through military aggression.

This position is reflected in other documents released by the U.S. security establishment. The Pentagon has been considering the impact of climate change on “national security” for many years. In a speech given in 2014, then Secretary of Defense Chuck Hagel called climate change a “‘threat multiplier’… because it has the potential to exacerbate many of the challenges we already confront today–from infectious disease to armed insurgencies–and to produce new challenges in the future.”

Congresswoman Alexandria Ocasio-Cortez was the only elected U.S. leader who broke the consensus and agreed that the military should be included in any pledge to cut greenhouse gases. She told Martin,

When we have global conferences about cutting emissions, to omit conversations about military investment is to omit measuring our CO2 emissions… there is no way for us to draw it down if we don’t measure it and we don’t commit to it.

Not only does the military play a role in contributing to environmental devastation with emissions, but globally, militaries and private security play an important role in ensuring the survival of extractive projects when they are met with resistance from local communities. This pattern can be seen in countries across the world–from the militarized crackdown on the resistance to the Dakota Access Pipeline in Standing Rock, U.S., to the participation of the Honduran military in suppressing protests against the hydroelectric project Agua Zarca.

Nnimmo Bassey, an environmental activist from Nigeria, has worked tirelessly to shed light on the role played by his country’s military in protecting the operations of the transnational oil corporation Shell in the Niger Delta. In the CODEPINK discussion during the People’s Summit, he recalled the horrific execution of writer Ken Saro-Wiwa and eight colleagues on November 10, 1995 by the Nigerian military government because of their protests against the oil companies, like Shell, that were actively destroying their land, Ogoniland. The area is one of the most polluted places in the world because of the extensive and clumsy oil extraction by transnational companies. According to a report by the United Nations Environment Program, the soil in that region is contaminated to a depth of 5-10 meters which has affected almost all of the bodies of water, including the groundwater. To this day, it is the transnational companies who receive protection from the state, while the livelihood of communities is threatened by contamination and militarization.

this is complete ecocide and a terrible crime against humanity. None of this would be possible without the corporations working with the protection of the armed forces.