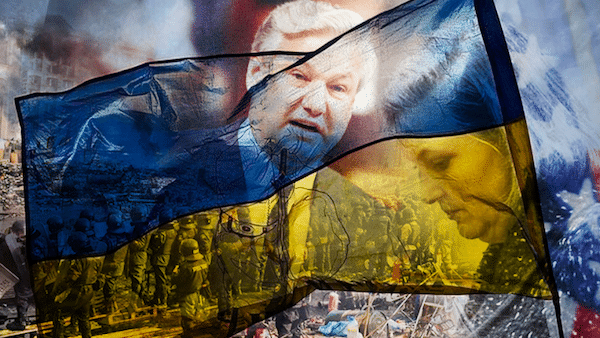 Back in 1992, when I was a correspondent in Moscow, the French review Sous le Drapeaudu Socialisme asked me for an article on developments in Russia and the–then disintegrating–Soviet Union. I wrote it, also publishing a variant in the Greek magazine Tetradia under the title “The global crisis in the former Soviet Union and the future of Russia” (Issue 31, Summer-Autumn 1992). There, I stated that “the Cold War is not over; it will start again. This time it will not begin from Berlin and Kabul, but from Kiev and Tashkent”. Why do I mention it now? Not to prove how smart I am, but to prove that today’s situation was absolutely predictable 30 years ago and is not an accident. It is the logical conclusion of the fundamental tendencies of capitalism, on the one hand, and the unavoidable consequence of dissolving the USSR without taking into account the right of its nations to self-determination on the other.

This was the opposite of what Lenin did back in 1917. By supporting the freedom of the peripheral nations of the Russian Empire and proposing them a new vision and idea for the future (Socialism), the Bolsheviks were able to keep together the larger part of it and to unite the force of the national feeling of its nations and of their political and social aspirations. The Russian Empire was the only one of the great empires, which did not disintegrate, as did the Ottoman and the Austro-Hungarian. It has instead transformed itself, even becoming a superpower during the 20th Century. But in 1991, the only Lenin one could find in Moscow was the dead one in the Mausoleum. I still remember Alexander Yakovlev, the Politbureau member, explaining how market reforms would keep the USSR united. He did not understand that if the country was going to become pro-Western and capitalist, the elites of the Republics would not need Moscow to turn to the West, but could go on their own.

At that time, 30 years ago, everyone, or nearly, in the East and the West, was applauding the supposed victory of “democracy” and the markets in the form of the collapse of “Soviet totalitarianism”, which had “ended” history and inaugurated an era of Kantian “Eternal Peace”. In Moscow, both “Democrats” and Nationalists were applauding the dissolution of the USSR. Russia then spent most of its political and diplomatic capital for the next thirty years trying–with no great success–to attenuate the consequences of the progress of NATO deep inside the territory of the ex-USSR. All the Soviet peoples, except Belarusians, paid an enormous price for the dislocation of the USSR, and the non-Russians a much higher one than the Russians. The economic, social, demographic and cultural cost of the so-called transition to capitalism has proven unprecedented for the whole industrial era of mankind!

Today, the Ukraine is not only the epicenter of a new cold war, but also one of the three most dangerous points on Earth, along with Iran and Taiwan, where a nuclear conflict could be ignited, leading to the end of mankind. We state this once more, because many people treat nuclear war like a videogame, just as the danger of a sui generis Neofascism (or Protofascism) appeared in the United States, masquerading in the clothes of a psychopathic clown like Donald Trump. But behind him, there are no clowns, but rather the heirs of Hitler’s mentality and ambition, like Pompeo, Pence, Netanyahu, the Evangelicals etc.

The particular and very dangerous form of the present-day “Ukrainian crisis” has arisen as a result of the way in which the USSR was destroyed; and of the coup engineered by Nuland, Brenner and Pyatt in Kiev, back in 2014.

Abolishing the right to self-determination

The official Western narrative is that the dissolution of Yugoslavia and the USSR has been a victory of democracy (“power of the people” in its first, Greek meaning of the world) and of the national rights of the Yugoslav and the Soviet states, narrative not contested by the Russian leaders of that time.

This is completely false. The dissolution of the USSR (and Yugoslavia) took place in such a way that whole, compact ethnic groups which were the majority in the regions they inhabited, e.g. the Russians of the Crimea or Donbas, who are an overwhelming majority in their regions, or the Russians who live in northern Kazakhstan (i.e. about half of the inhabitants of that country), were left out of Russia, their motherland. Anybody with even a small knowledge of Russian and Ukrainian realities can easily understand that the Crimea and Donbass are more Russian than Moscow. The same happened with the Serbs, who were, for example, a majority of the inhabitants of Krajina in Croatia, and who suddenly found themselves a minority in a foreign country!

The dissonance of the new states with ethnic realities and the completely undemocratic disregard for the right of nations to their self-determination created the conditions for and led to ten million refugees or immigrants in the former USSR, five wars in former Yugoslavia and ten in the former USSR. To demonstrate the aberration of what happened in 1991, it is enough to recall that one fourth of the Russian nation was left outside Russia!

There is no doubt that the Soviet Union had many problems and needed reconstruction (‘perestroika’), but the method used was rightly called ‘catastrophic’. In particular, why, at a time when the whole world was tending towards transnational integration, was the USSR dismantled, instead of being reformed in depth? And why, having opted for dissolution, was at least the principle of self-determination of nations not applied?

The Soviet Union was dismantled on the initiative of the Russian President Boris Yeltsin and with the agreement of the then Presidents of the Ukraine, Leonid Kravchuk, and of Belarus, Stanislav Shushkevich, in December 1991. Yeltsin wanted to replace the Soviet President in the Kremlin and the only way he could do this was by making the country, of which Mr. Gorbachev was the President, disappear.

The three leaders were not authorized by anybody to dissolve the USSR, an act of very dubious legality and legitimacy, especially given the fact that the population of the USSR had already supported, by an overwhelming majority (70%), the preservation of the USSR in the referendum of March 1991.

The Soviet Union was not dissolved by a revolution of its nations, but rather by a counter-revolution of groups of its bureaucracy, in synergy with the growing and often criminal “neo-capitalist” forces, which wanted to become owners of Soviet property, rather than mere and temporary administrators of it. Those forces found in nationalism the ideological platform they needed to legitimize the plunder of power and property.

I will not claim that Yeltsin acted at the behest of the United States, because I cannot prove that, and I do not believe that this is what happened. His main motivation was his personal power. But I am sure that it would have been impossible for him to act in this way unless he was sure that the leadership of the United States was in complete agreement with him. His choices were made long ago.

What I can state with certainty is that when the United States and/or Germany intervened in former Yugoslavia, their interventions created the prerequisites for the conflicts that followed. The recognition of Slovenian and Croatian independence led to the war in Bosnia and the ethnic cleansing of Krajna, while the Dayton agreements led to the Kosovo war. And the Kosovo war left us with the possibility of a new crisis and war in Kosovo. The Americans need such situations, because in a stable environment it is more difficult to intervene and to use the conflicts between the local nations in order to dominate the region. Every agreement bore in itself the sperm of the next disagreement.

From Yeltsin to Nuland

Despite the fact that they had every reason to question the legitimacy of the regime imposed on them, neither the Russians of the Ukraine nor Moscow challenged the 1991 decisions until 2014.

Then Victoria Nuland took action. Known as the “Lady Macbeth of perpetual war” or the “Fuck the EU” lady, after the historic phrase she used with the then U.S. ambassador in Kiev at the height of the Ukrainian crisis, Nuland, still No3 in the State Department, has been a constant presence in the planning and implementation of all U.S. interventions of the last thirty years, a “liaison” of sorts between the far right of the Democrats, the Republicans and the Israelis.

Nuland furiously supported the large, popular and peaceful protest against President-elect Yanukovych, going so far as to hand out sandwiches to the protesters herself. The EU, worried at the height of the crisis, sent to Kiev the foreign ministers of France, Germany and Poland, who reached an agreement for a peaceful resolution of the crisis.

The European ministers’ airplane had barely had time to take off, before the snipers took action and the CIA and Israel backed forces took the initiative to overthrow President Yanukovych, who fled. A new government took power in Kiev, and one of its first measures taken was to restrict the teaching of the Russian language in eastern Ukraine and the Crimea, whose inhabitants immediately got the message and began resisting the new authorities.

Russia could not ignore the measure, either, as it has retained in its collective memory that it was twice attacked through the Ukraine and Belarus by the armies of Napoleon and Hitler. Putin could not tolerate the conversion of the Crimea into a NATO base, and if he had, he would have fallen. With the support of the overwhelming majority of its inhabitants, expressed in a referendum, he decided to unite the peninsula with Russia. But he refrained from intervening in this way in the rest of the Ukraine, where the inhabitants of the eastern region had taken up arms to protect themselves, because he hoped to save Russia’s relations with the European Union.

A few months later, in August 2014, Gabor Steingart, editor of the German industrialists’ newspaper Handelsblatt, had the courage to note in an article that the German press was already writing against Russia the same things it had written against Russia a hundred years previously, in August 1914, when the Great War was beginning.

The United States and its allies bear the exclusive responsibility for the situation they have created in the Ukraine. We do not know how this crisis can be solved, but what we do know with certainty is that it is impossible to impose on the Russian majority of the Donbass, Lugansk and Crimea regions the rule of Kiev, much more of the neo-Fascists ruling in Kiev.

If Washington insists on trying to achieve this, it will open wide the road as a minimum to a very serious escalation of the whole European situation, as a maximum to a world war, with the Biden administration helping the opposite, sui-generis neo-fascist faction inside the western system (Trump, Pence, Pompeo, Netanyahu etc.).

Dimitris Konstantakopoulos is a Journalist and expert in geopolitics (Greece).