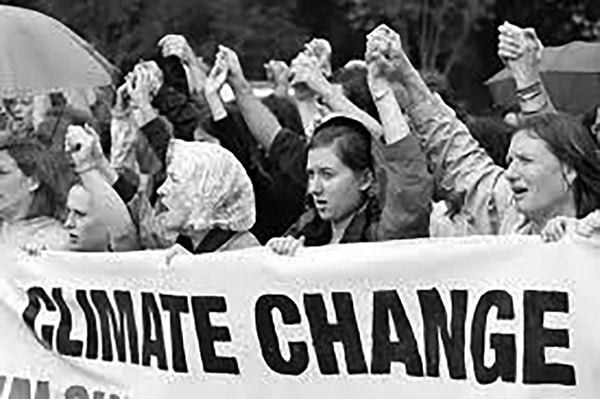 Thirty years ago, climate modeling scientists predicted exactly the global events–massive wildfires, intensified tropical storms, flooding and droughts–that we’re seeing right now. The only mistake was that they projected these disasters in 100 years’ time–the effects have hit us 70 years early.

Capitalism, in its insatiable desire for profit, has ravaged the earth and led to the ecological disaster we now face. Given the extreme fires and droughts, climate change denial has gone out of fashion.

Mainstream media have begun calling this cumulative destruction the result of “human tinkering” with the natural world in which we live. That’s a severe understatement when already more than 70 million people are displaced by rising sea levels, drought, the contamination of our water, industrialized corporate agriculture that exhausts the soil, plastics in the ocean, the rapid destruction of forests–particularly tropical rain forests–and the extinction of thousands of species reducing biodiversity.

Yet the root cause remains unmentioned. Politicians who take their cues from the capitalist class offer piecemeal solutions. The plans submitted at the UN Conference of Parties (COP26 coming up this November) offer little more, and project technological fixes that haven’t yet been invented–and in some cases, such as “geoengineering” schemes, likely to make things even worse.

When a sixth “mass extinction” looms, a socialist perspective begins with a materialist view that humans are a part of the natural world and must live in concert with it.

Beyond the “Growth” Religion

In contrast, capitalist production has imposed an antagonistic and irrational “metabolic rift” between humanity and nature that leads to a dead end. That’s why what we call ecosocialism rejects not only the goal of ever-increasing profitability for the enrichment of those who own the corporations, but the very imperative of continuous “growth” that’s built into capitalism.

Instead, ecosocialism calls for a fundamental transformation of production to be democratically controlled (“socialized”) and organized around human needs.

Why is it that “progress” and growth became the dominant ideology, tantamount to a religious dogma, not only within the capitalist class and its propagandists, but within labor movements and the former Soviet Union? How many times have labor leaders talked about “growing the pie” so there will be more for the working class?

We could conclude this ideology was sustained by apparently limitless possibilities. Yet Marx and Engels, building on the work of 19th century scientists such as the German agricultural chemist Justus von Liebig, noted the soil degradation and urban-rural imbalances occurring in Europe and North America. The exhaustion of capitalist agricultural production in rural communities demanded the importation of guano from Peru, while pollution took over industrialized cities. Other 19th century thinkers recognized it too.

Yet despite great novels and early sociological studies that revealed the extraordinary poverty of the working class, capitalism proclaimed a bountiful future as new industries spread. When “muckraking” journalists revealed the lack of public health, the capitalist ideology continued to extol the individual who had achieved success and promised that same path lay open to others. All the while, colonialism and imperialism pillaged the resources and enslaved Indigenous populations of what we now call the Global South–indescribable crimes against humanity that helped enrich the centers of capitalism.

Today the capitalist myth of overcoming poverty and inequality has come up against the reality that resources have been depleted and the future we face is one of increasing heat, drought and food insecurity. How can an ecosocialist vision offer a way out of this impasse?

For many who are worried about climate change, the reforms they call for consist in simply replacing current energy sources by non-polluting and renewable ones. Thus for example, the global auto industry attempts to refashion itself through developing electric cars, vans and trucks, not by admitting that the world cannot sustain itself on individualized transportation and the infrastructure necessary to sustain it.

Ecosocialists see several principles as fundamental to reorienting society, beginning with understanding that we cannot go on like this and that decisions about what to produce, and how, must be made democratically and not by capitalist profiteers or bureaucratic elites. And we recognize these important truths, which are hidden by the dogma of “growth”:

Workers and our communities need to undertake these essential reforms as we increase our quality of life and decrease the work time required to carry out this process. This can provide us with the confidence to end the stranglehold of capitalism.