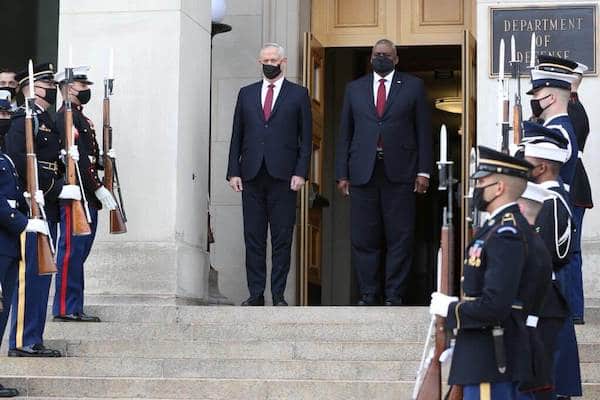 You have heard the news that the talks to revive the Iran deal are apparently on life support in Vienna. The United States claims Iran has moved the goalposts. And though the State Department team remains positive, our dear friend Israel has been demanding that the U.S. break off the talks.

The Israelis get unrivaled access to the White House even as they declare once again that they are drawing up plans to attack Iran– but it would be good if the U.S. went first with some strategic strikes. The U.S. has reportedly restrained Israel on attacking Iran for the umpteenth time. 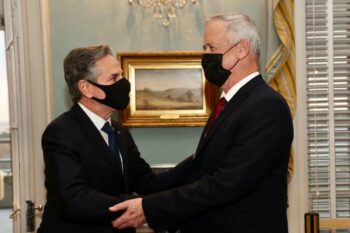 It’s an old story. Donald Trump now confesses that he was used by Israel, when he ordered the killing of an Iranian general in 2020– a blatant war crime.

That ought to be big news. But though our press acknowledges that Israel is the only country that really objects to the Iran deal (as was the case in 2015 when Obama made the historic deal and defied Israel), what is not openly discussed, except in the leftwing press, is that Israel is “trying to pressure Washington into an aggressive posture toward Iran that could spiral into war.” So another huge disaster looms in the Middle East, due to Israel’s need to avoid dealing with the Palestinian/apartheid issue and shift the focus to supposed “existential” threats.

A country with “dozens” of nuclear weapons itself wants Iran sequestered from the world ala Gaza– and it has the ear of the Biden administration, as no one else does. The Israeli defense minister who is trying to shut down Palestinian human rights organizations (and whose scheme of bombing Gaza “back to the stone age” is under investigation from the International Criminal Court) gets a meeting with our defense secretary and secretary of state without any mention of his tyrannical actions.

Here’s a roundup of some of the leftwing coverage. Branko Marcetic writes at Jacobin about Israel’s attempts to manipulate U.S. policy. The article is headlined, “Israel Is Trying to Push War With Iran — and the US Press Barely Cares.”

Look it up and you’ll find next to no coverage in the US media about top Israeli officials visiting Washington this week to push for military strikes against Iran, raising the risk of sparking war. Yet that’s exactly what happened.

Israeli lobbyists “persuaded” Trump to break the deal in 2018. If Russia were meddling in our foreign policy like this, it would be an outrage.

[T]he relative US media silence on news that Israeli officials are trying to pressure Washington into an aggressive posture toward Iran that could spiral into war stands in stark contrast to the press’s ongoing obsession with the Kremlin’s attempts at intervening in US politics. That particular effort yielded no policy concessions to Russia over the four years Trump was president, in contrast to Israel’s political meddling in the United States, which continues to be more pervasive, normalized, and successful than that of arguably any other foreign government. Yet that’s not considered scandalous by the establishment press, even if it could be leading us into war.

Marcetic helpfully notes that “Israel… is known to have at least dozens of nukes and has long rejected any regional antinuclear agreement.”

Israel is Hell-Bent on sabotaging U.S. nuclear negotiations with Iran… Israel is doing everything it can to… stoke a war.

Reflecting on the abject failures and destruction wrecked by the Iraq and Afghanistan wars, a war with Iran would be catastrophic. One would think that Israel, which receives $3.8 billion annually from the United States, would feel obligated not to drag the United States and their own people into such a disaster. But that doesn’t seem to be the case.

Trita Parsi writes at Responsible Statecraft that just allowing Israel in the room gives a seat at the table to a country that is working against the U.S. interest. “Biden’s efforts to appease Bennett on Iran have failed on all fronts,” Parsi writes.

In December 2020, Obama’s deputy national security adviser, Ben Rhodes publicly implored Biden not to repeat this mistake: “I plead with [Biden],” he said on the PodSaveAmerica podcast. “Do not think there is any ounce of good faith that will be coming your way from Bibi Netanyahu, from MBS, and from the Tom Cottons of this world. These people have no interest in a deal. They’ve never had an interest in a deal,” he declared. “How many times do we have to go through this play? This is in the hands of the Biden people to say: ‘We don’t need to listen to these people.’”

But Biden chose to listen to them. Instead of returning to the JCPOA in the first days and weeks of his administration, critical time and effort were spent trying to persuade Israel, Saudi Arabia and the UAE to get onboard with diplomacy.

Yes and why do we listen to them? Why can’t we just tell them to go away? Why do even progressive congresspeople go on trips to meet Israeli officials, sponsored by the Israel lobby? Because the lobby is a major force inside the Democratic Party; and Biden is afraid to take it on as Obama did.

Parsi focuses on a New York Times report that shows that Biden has been seeking to appease Israel from the start in his outreach to Iran.

This line in the Times’ piece nails the folly of Biden’s efforts: “Despite the tougher American talk, Israeli officials left worried that the diplomatic outreach to Iran would continue.” Indeed, Israel’s greatest worry is that diplomacy succeeds, not that it fails…

Biden is merely continuing Trump’s policies, Parsi writes. He concludes by calling on the U.S. to pursue the American interest, not Israel’s.

The moral of the story is this: U.S. and Israeli interests on Iran diplomacy are irreconcilable. Biden’s efforts to square the circle have predictably failed. Biden must choose whether he will pursue America’s interest or Israel. This should not be a difficult choice.

That New York Times report offers helpful coverage of the facts. It shows Biden bending over backwards for Israel: the president has adopted a “tougher line… aimed at calming increasingly frustrated Israeli officials.”

Reporters Julian Barnes, David Sanger, and Ronen Bergman say the U.S. has been to try to present a “united front” with Israel re Iran– by threatening war:

In an effort to close the gap, American officials let out word this week that two months ago, Mr. Biden asked his national security adviser, Jake Sullivan, to review the Pentagon’s revised plan to take military action if the diplomatic effort collapsed. Administration officials also outlined new efforts to tighten, rather than loosen, sanctions on Iran…

The U.S. has resisted Israel efforts to “sabotage” Iranian nuclear facilities, saying, We can do better through peaceful means. But that’s not good enough.

Israeli officials have not been reassured. They are increasingly concerned that the United States will eventually reach a deal with Tehran and then seek to block Israeli intelligence services from carrying out covert sabotage attacks. Israeli leaders say they want a guarantee from the Biden administration that Washington will not seek to restrain their sabotage campaign, even if a renewed nuclear deal is reached.

And now the Times is reporting on a renewed Israeli effort to try to coerce American terms on the Iran deal by threatening “repeated bombings” of Iran, a tried-and-true Israeli tactic.

Again, why is Israel able to give the U.S. ultimatums, face to face? Why is a small crazed country that is armed with nukes able to push hawkish policies in the U.S.? Because of domestic politics. But the Democratic/progressive/Jewish soulsearching never begins.