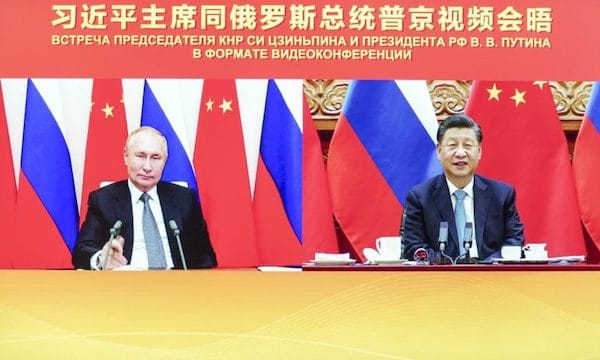 The New York Times got the story correct when its Moscow bureau watched the outcome of the videoconference between Russian President Vladimir Putin and Chinese President Xi Jinping yesterday and assessed that the U.S.’ two main adversaries “sought mutual support in their conflicts with the West but have not yet declared a formal alliance.”

The Sino-Russian alliance is a geopolitical reality today and one has to be colour blind not to see its spectacular hues. Yet, it is not (yet) a military alliance. To apply a western analogy, while the Sino-Russian partnership has great potential to model itself after the European Union, neither Moscow nor Beijing desires an Eurasian NATO to create synergy for it.

The westerners have a comprehension problem. Fundamentally, that is because of their colonial past. Yet, six EU member states, all who have declared their non-alignment with military alliances, have shown that there is life beyond the NATO: Austria, Cyprus, Finland, Ireland, Malta, and Sweden. Curiously, none of them has a gory colonial history.

Neither Russia nor China has a colonial past. They have been imperial powers but their greatness didn’t come out of slave labour or plundered wealth out of Africa, West Asia or the Southern Hemisphere. This important distinction is at the core of today’s geopolitical conundrum.

The Putin-Xi videoconference has taken place at a crucial juncture in regional politics with tensions rising over Ukraine and Taiwan. But the two superpowers assess that as things stand, each side is perfectly capable of securing its core interests on its own.

In fact, many American analysts also admit that the U.S. will not risk a military intervention in Ukraine or Taiwan, not only due to the spectre of defeat but also the catastrophic consequences for the world order. Indeed, if conflict situations erupt simultaneously in the two theatres, it becomes a nightmarish scenario for the Biden administration.

To contain China and Russia simultaneously is arrogant thinking. Although the U.S. has an advantage in terms of strength, it cannot crush either China or Russia. Having a strategic collision with any of the two countries will bring unbearable costs to the U.S. It’s a nightmare for Washington when China and Russia join hands… Threatening and coercing a major power is a bad choice. It is especially unwise when doing so against two major powers. Washington should learn to respect the core interests of the other major powers.

Thus, while the prospect of a Sino-Russian military alliance hangs like the sword of Damocles, given the trajectory of China’s and Russia’s accelerating surge as world powers, Moscow and Beijing may never have any need of that sword. But the Putin-Xi videoconference was a stark reminder of it.

The Biden Administration cannot browbeat Russia or China. Over Ukraine, stirrings of rethink are already appearing. According to reports, the Biden Administration is counselling Kiev to act with self-restraint, work on granting autonomy to the breakaway provinces in eastern Ukraine and seek a political solution within the framework of the Minsk agreements (which has been Moscow’s suggestion, too.)

Equally, behind the rhetoric, Washington may be engaging with Moscow as regards the latter’s “red lines” over NATO’s further eastward expansion and the Western military deployments close to Russia’s borders. Deputy Foreign Minister Sergey Ryabkov conveyed Russia’s security guarantee suggestions to the U.S. in a letter handed over to the U.S. Deputy Secretary of State Karen Donfried who visited Moscow yesterday.

Beijing is au fait with these developments. All the same, significantly, Xi Jinping told Putin that China plans to expand cooperation with Russia and Collective Security Treaty Organization (CSTO) member countries to support security in the region. The exact formulation per a Chinese foreign ministry statement quoting Xi is as follows:

The Chinese side intends to continue to develop flexible and diversified cooperation with Russia and CSTO member countries and stand up for security and stability in the region.

The top Kremlin aide Yury Ushakov later told reporters in Moscow that Putin and Xi also discussed “literally all pressing and important issues” ranging from security guarantees for Russia in Europe to the creation of new alliances in the Asian-Pacific region.

Washington is hard-pressed to match it, as the recent clumsy faux pas over AUKUS shows. The Biden Administration is resorting to cherry-picking and bragging that the U.S. has more “allies” than China or Russia can count.

The mutual respect and mutual trust in the Sino-Russian alliance is steadily impacting the security of the Asia-Pacific region as well. By coincidence or not, the Secretary of Russia’s Security Council Nikolay Patrushev, accompanied by a high-level delegation of representatives of Russia’s Defense Ministry, the Federal Security Service, the Foreign Ministry and the Federal Service for Military-Technical Cooperation was on a “working visit” to Phnom Penh yesterday.

The issues of Russian-Cambodian military cooperation and interaction on the anti-terrorist track were discussed. The parties noted that cooperation along the lines of power structures and special agencies and services is one of the foundations of bilateral relations between Russia and Cambodia.

Cambodia is one China’s closest neighbours and a key ASEAN partner. The geopolitics of Cambodia is inseparable from the US’ Indo-Pacific strategy. Ream Naval Base on the Gulf of Thailand is the largest military base in Southeast Asia.

On December 10, Washington announced new sanctions on Cambodia, including an arms embargo to counter PLA’s influence in Cambodia. Patrushev’s visit came a week after that.

Patrushev’s interlocutor in Phnom Penh was General Hun Manet who is also the commander of the Royal Cambodian Army, the head of special forces and the country’s counterterrorism force. Hun Manet is the eldest son of Cambodian prime minister Hun Sen.

Succinctly put, Cambodia becomes yet another template of the Sino-Russian alliance in play. A similar play is happening in Vienna over Iran. This has been going on for some time also over North Korea. Of course, this is very much in evidence in Afghanistan.

In fact, External Affairs Minister S. Jaishankar said recently at the Russia-India-China (RIC) ministerial format that it is necessary for RIC countries to coordinate their approaches on the threats of terrorism, radicalisation and drug trafficking.

Clearly, even in India, which has been bombarded with American spin about the negative fallouts of Sino-Russian alliance for its national security, there is appreciation today of that alliance as a factor of peace and global stability. Thus, on December 13, Russia, China and India filed a draft Security Council resolution on December 13 on aid for the Sahel region, where western intervention has spectacularly backfired as in Afghanistan, Iraq, Syria, Libya and Yemen.

The bottom line is that a military alliance becomes gratuitous in the 21st century when the objectives of creating space for a more democratised world order guaranteeing the security and sovereignty of small and big countries alike and consolidating the emergent multipolarity can as well be realised peacefully through diplomacy.

However, a caveat must be put here. Putin has shared with Xi Russia’s specific suggestions sent to the American side aimed at developing legal guarantees for ensuring Russian security. According to a report in today’s Izvestia, the main issues covered in the letter were focused on “the attempts made by the U.S. and NATO to alter the military-political situation in Europe in their favour.”

Herein lies the catch. The legally binding issue here is, in effect, about amending the 1949 North Atlantic Treaty, which defines the geographical scope of the alliance. This is easier said than done, as a consensus will be needed amongst the NATO allies and approval by the U.S. Congress.

At any rate, Washington’s track record on the sanctity of international treaties is highly dubious. Therefore, how all this pans out remains to be seen. The Russia-China alliance is inextricably linked to that.