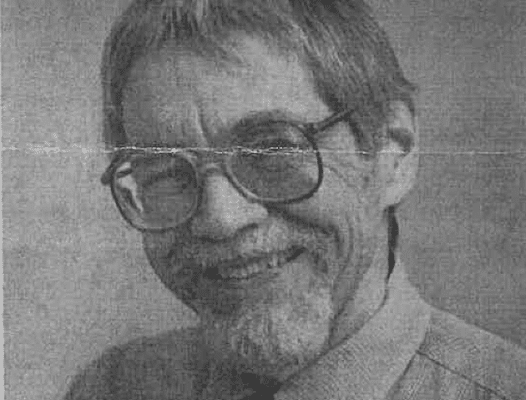 [Obit written by A. Kent MacDougall and reproduced from his original text, filed five years ago.]

Born in Madison, Wisconsin, Kent grew up in Evanston, Illinois where his father taught journalism at Northwestern University. A chip off the old block, Kent went on to become a daily newspaper reporter for 25 years before joining the faculty ofU.C. Berkeley’s Graduate School of Journalism.

Kent’s journalism career began his freshman year at Knox College in Galesburg, Illinois, where he worked as a sports reporter for the student weekly. Following graduation, he spent two summers bicycling through Europe, and he held jobs as diverse as clerking for the Alaska Railroad in Anchorage and selling for Fuller Brushes door-to-door in the Hell’s Kitchen section of New York City. He then earned a master’s degree in journalism at Columbia University and started work in nearby Passaic, New Jersey as a $65-a-week police reporter.

It was during his five years at the Passaic Herald-News that Kent earned a reputation for depth reporting on major topics. His projects ranged from a 13-part series of articles on dangerously conflicting traffic laws to a 100-part series on the rich history of the Passaic area.

From Passaic, Kent moved to the Wall Street Journal in New York where he specialized in covering the publishing industry during his 10 years there. The Journal collected a dozen of his articles in an anthology, The Press: A Critical Look From the Inside.

Later, Kent put in another decade with the Los Angeles Times. His reporting there won six national awards, including two for a series on the news media’s controversial coverage of business that evolved into a book, Ninety Seconds to Tell It All: Big Business and the News Media.

After completing his 25-year career with the mainstream press, Kent published his reporting memoirs. In them, he revealed that throughout his career he had been an undeclared socialist who, during the first half-dozen years, had simultaneously contributed to radical periodicals under pen names, even as he reported for commercial dailies under his own name.

Despite strong anti-establishment convictions, Kent stuck to accepted standards of newsworthiness, accuracy, and fairness in his reporting for mainstream newspapers. Rather than interfering with the professional performance of his job, his outsider’s perspective helped make him a better reporter. Reconciling radicalism and reporting for the capitalist press came naturally to Kent. He simply followed his father’s lead. Curtis D. MacDougall was an outspoken critic of U.S. militarism as well as an activist for civil liberties, and he ran for U.S. senator from Illinois on the 1948 Progressive Party ticket headed by Henry A. Wallace. Kent considered the United States a plutocracy ruled by the rich and powerful in their interests.

His hero was Eugene V. Debs, the railway labor leader and five-time Socialist Party candidate for president, who was imprisoned for speaking out against American involvement in World War I. Kent’s own anti-war activities helped provoke an FBI investigation resulting in a file, obtained under the Freedom of Information Act, that ran 126 pages.

Kent felt at home in dissident-friendly Berkeley. He participated in living room discussions held by Bay Area Friends of Monthly Review, the independent socialist magazine to which he contributed over a span of 45 years. And he found receptive audiences for his critiques of the U.S. military/industrial /academic/incarceration/surveillance complex. His essays explored trends toward a U.S. police state, drew parallels between the ancient Roman and modern American empires, analyzed working class support for ruling class wars, and documented other systemic ills.

Kent’s mature worldview owed much to boyhood experiences. He absorbed the waste-not, want-not, plain-and-simple ethos imposed by lean times during the Great Depression of the 1930s and by consumer goods shortages during World War Il. His WWII backyard “victory garden” sprouted radishes, carrots, lettuce, and tomatoes.

Continuing to emulate those simpler times throughout adulthood, Kent made a practice of making do with what still worked. He stuck with his vintage 1974 Plymouth Valiant, favoring the klutzy clunker’s ergonomically superior bench seats to the bucket seats of newer, sleeker models. He preferred Beriodically defrosting his quiet 1950s refrigerator to putting up with a noisy up-to-date frost-free model. And his manual typewriter and rotary dial telephone continued to suit him just fine.

Resisting digitalized journalism, Kent remained a print devotee to the end, subscribing to two daily newspapers and two dozen magazines. Taking advantage of print’s physicality, he underlined significant passages in articles he read, before clipping and filing the articles for future reference. Kent benefited from having grown up in an era when boys did jobs since taken over by men and machines. Throughout junior and senior high school, he had before-school, after-school, weekend and summer jobs that introduced him to the world of business he would go on in adulthood to cover as a business reporter.

He mowed lawns, delivered newspapers, soda-jerked in a drug store, washed dishes by hand in a greasy spoon, operated a manual elevator in a residential hotel, and delivered telegrams on his bicycle and auto parts in his 1937 Willys jalopy.

Although never an athlete, Kent made vigorous physical activity a priority. For 35 years following college graduation, he found time to run three miles three times a week, before switching to lap swimming six days a week for another 15 years.

His favorite recreation was hiking—in East Bay regional parks on weekends and in the Sierra Nevadas in summer. He considered afternoon walks with his dog in their hilly North Berkeley neighborhood not as a chore to be endured but a pleasure to be cherished.

Dogs were an important part of Kent’s life from boyhood on. He had six of them. His last, a border collie mix named Alicia, was his all-time favorite. After the breakup of his 42-year marriage, Alicia provided essential companionship, making Kent’s home and his life seem less empty.

Kent’s leisure activities included shooting basketballs in his back yard, hand-crafting bookcases and other useful household items in his basement carpentry shop, playing Mozart-era slow movements on his flute in his living room, and participating in contract bridge card games in his dining room and at senior centers.

Though living comfortably in Berkeley’s salubrious micro-climate, Kent grew deeply discouraged about global prospects. His mature work reflected this pessimism, starting with a 1984 Los Angeles Times series of articles detailing the persistence and widening of the ages-old gap between rich and poor, followed by a 1987 award-winning series on the accelerating worldwide destruction of forests, and culminating in a 1996 article in Wild Earth, “Humans as Cancer,” that drew parallels between the way cancer progresses in the human body and humans’ progressively malignant impact on Earth. Convinced that Earth is speeding toward ecological collapse, Kent felt fortunate to have inhabited the planet while it still was mostly habitable. Kent felt fortunate to have hiked in Glacier National Park while it still had half a dozen glaciers.