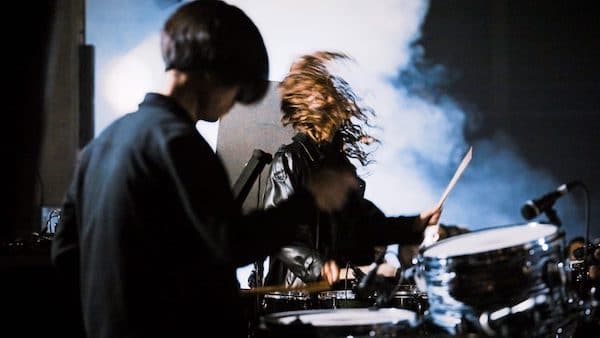 In September 2021, the team behind Berlin Atonal launched a new live concept in response the challenging conditions presented by the Covid-19 pandemic. Titled Metabolic Rift, the month-long event series combined both an exhibition spread across Berlin’s Kraftwerk venue and a series of concerts that captured the spirit of Berlin through site-specific interventions and live performance.

One of the highlights from Metabolic Rift’s live programme was a performance from LABOUR, the project from Berlin-based multidisciplinary artists Farahnaz Hatam and Colin Hacklander that combines their experience in molecular biology, sound art and post-tonal theory to create works that interrogate existential questions and the power structures that form our collective reality.

LABOUR’s Metabolic Rift performance, which we’re presenting highlights of above, featured the debut of a brand new show. LABOUR says: ‘the hit of enlightenment (بیگانگی)’ debuted at Metabolic Rift 2021, beginning where ‘next time, die consciously (بیگانگی)’ ended the 2018 festival: both musically with an articulation of architectural and acoustic space, and conceptually with the realisation that heteronomy is the condition of all things–that external forces create our notion of self which tends to be constructable and therefore de-constructable.

Taking a critical stance towards notions of regulated time by embracing rhythmic instability and sound as sculptural material, LABOUR devise methods of co-existence and distinction through rupture while gesturing towards the possibility of strong, sudden shifts in consciousness.