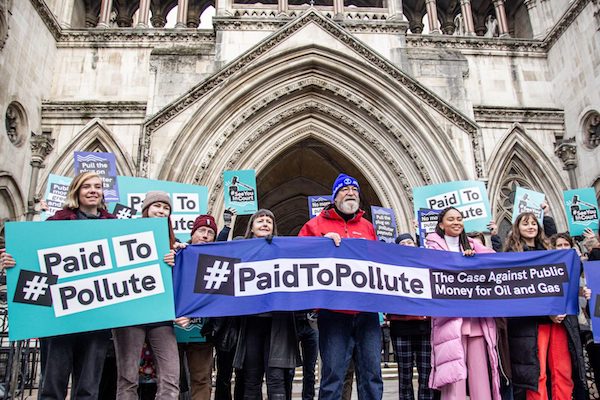 Climate campaigners gather outside the Royal Courts of Justice in London earlier this month. Three members of the Paid to Pollute group have brought a case against the UK government challenging public money going to the oil and gas industry. (Photo: Sabrina Merolla / Alamy)

The global surge in legal action on climate change has shown no signs of slowing this year, with more than 1,800 cases completed or in process, up from 1,500 last year.

While the vast majority of lawsuits are still from the United States, they are increasingly being filed in other jurisdictions, from Guyana to South Africa. The focus is beginning to broaden from governments to include the private sector, and there were some notable successes this year. These could provide a powerful tool to force more ambitious climate action, although there is still a long way to go to hold states and companies accountable for their emissions.

European states in the dock

Europe was a hotspot for successful litigation this year. In April, Germany’s top constitutional court ruled the government’s efforts to cut emissions not strong enough to protect future generations, thereby breaching the fundamental rights of its young people. In response, outgoing German chancellor Angela Merkel pushed through a new version of the national climate law, bringing forward the target date for net zero by five years to 2045.

The French government was twice ordered to honour its climate commitments. An unprecedented injunction from the country’s highest administrative court in July said it must take “all necessary additional steps” to meet targets. Another gave it a deadline of 31 December 2022 to “repair” an overshoot of its emissions.

Not all rulings were wholesale victories for climate campaigners. A court in Brussels said Belgium’s failure to meet its climate targets had violated its citizens’ human rights, but refused to impose on the government a binding target to cut emissions, on the grounds this would breach the separation of powers between state and judiciary.

As these proceedings closed, a number of similar European cases began this year, most notably in Italy and Poland.

In the United Kingdom, there were several attempts to force climate action through the courts, none yet successful. These included actions by campaigners to try to block an enormous road-building strategy and the expansion of London’s Heathrow Airport, which both failed in court.

A separate lawsuit, brought by three young people who claim the UK government is breaching their human rights, is waiting to see if it can proceed to a full hearing.

US and Australia top the charts

Although the U.S. is still where most lawsuits have been filed – over 1,300 at the last count – many of them have become bogged down in procedural hurdles. Plaintiffs in the most prominent national case, Juliana v the United States, in which 21 young people argue the government’s climate inaction breaches their constitutional rights, attempted and failed to reach a settlement with the justice department this year. They expect to return to court next year to continue arguing their right to make their case in full. 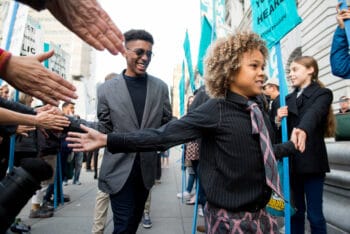 KNJGEJ San Francisco, CALIFORNIA, USA. 11th Dec, 2017. Youth plaintiff LEVI DRAHEIM, right, and ISAAC VERGUN greet well-wishers as they walk into the courthouse for a hearing in the landmark Juliana v. U.S. climate change lawsuit at the 9th Circuit Court of Appeals in San Francisco. The court was holding a hearing on a motion by the Trump administration to stop the lawsuit from proceeding to trial. The case involves 21 young people suing the federal government over their constitutional right to a stable climate. (Photo: ZUMA Press, Inc./Alamy Live News)

In Australia, however, where the second highest number of cases were filed, some important rulings have been seen. In a case brought by bushfire survivors, a court in New South Wales ordered the state’s environmental protection authority to “develop environmental quality objectives, guidelines and policies to ensure environment protection from climate change”.

Next year is likely to see the final outcome in a major case brought by student activist Anjali Sharma and seven other teenagers against the expansion of a coal mine in New South Wales. While this year, the federal court found environment minister Sussan Ley had a “duty of care” to protect children in Australia from personal injury or death resulting from climate change. It was a landmark decision, but one the government has appealed.

East of Australia in the South Pacific, the tiny island nation of Vanuatu made history this year by seeking an advisory opinion from the International Court of Justice on the issue of climate change and human rights.

With climate litigation cases increasingly referring to breaches of human rights – and judges making the link explicit – a new legal avenue has opened itself up for campaigners. The European Court of Human Rights, which is responsible for interpreting the European Convention on Human Rights, accepted cases from two different groups and has given them priority status.

The first involves young activists from Portugal who want the court to order 33 states in Europe to adopt collective emissions cuts consistent with the Paris Agreement’s 1.5C warming target. The second is by a group of elderly women against the government of Switzerland who say their health is at risk from heat waves exacerbated by climate change.

The European court is still deciding whether to accept a third case, brought by six climate activists and two environmental NGOs against the government of Norway. The group had tried to take action in their domestic courts against Norway’s approval of new licences for offshore oil drilling in the Arctic, but the country’s top court rejected their arguments this year.

However, attempts by campaigners to bring a lawsuit, dubbed the People’s Climate Case, in the Court of Justice of the European Union failed in March on the grounds that the claimants did not have a right to challenge EU law.

Nor did the UN’s Committee on the Rights of the Child agree with a petition brought by children from around the world, who accused Argentina, Brazil, France, Germany and Turkey of breaching the Convention on the Rights of the Child by failing to act decisively enough on climate change. The group, led by Swedish activist Greta Thunberg, has since filed a legal petition to the UN secretary-general, António Guterres, urging him to declare a “system-wide climate emergency”.

Litigation on the up in global south

While the overwhelming majority of cases continue to take place in the global north, climate litigation is growing in the global south too.

This year saw the first constitutional climate case in the Caribbean, challenging fossil fuel production on climate and human rights grounds. Two citizens are taking on Guyana’s government, seeking an end to a huge offshore drilling project run by ExxonMobil and other large oil firms.

Elsewhere, a group of indigenous Amazonian people took a local arm of one of China’s biggest oil firms to court in Ecuador’s first major climate change litigation case. The judge ruled against them.

In South Africa, a national plan to build new coal-fired power stations is currently being challenged in court for breaching the rights of current and future generations.

To date, most cases have been brought against governments. But 2021 was the year attention broadened to include the private sector, says Joana Setzer, an assistant professor at the London School of Economics specialising in climate litigation. 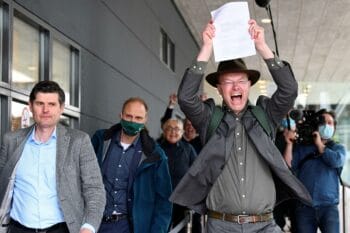 Dutch NGO Milieudefensie’s director, Donald Pols, emerges from court victorious after winning a case against Shell in May this year. The court found the company legally liable for contributing to climate change, and ordered it to cut its emissions. (Photo: Piroschka van de Wouw / Alamy)

In May, Shell became the first company in history held legally liable for contributing to climate change, when a Dutch court ordered it to cut its global CO2 emissions 45% by 2030, and ruled it was responsible for its customers’ emissions too. Shell is appealing but the court made clear it should start acting on the decision immediately. Then, in November, Shell made the surprise announcement it was moving its headquarters to the UK, although it has said this will not affect the ruling. Dutch NGO Milieudefensie (Friends of the Earth Netherlands), which brought the case, has been bullish about the relocation, saying it actually “opens up a new front, including for future cases”.

Speaking at an event during COP26, Milieudefensie lawyer Roger Cox said he expected more successful cases in the manner of the Shell one in future.

The following month, German NGO Deutsche Umwelthilfe filed a lawsuit against car manufacturers BMW and Daimler for refusing to tighten their goals to cut carbon emissions, with a similar case brought against VW by Greenpeace Germany and Fridays for Future activist Clara Mayer in November.

Setzer says this is a sign that litigation is diversifying from a focus on the fossil fuel industry towards other sectors, a trend she expects to continue.

Others are taking a different approach. In August, the Australian NGO Environmental Defenders Office filed a suit under consumer protection law against oil and gas firm Santos for falsely claiming to produce clean energy and having a pathway to net zero emissions.

As more companies make net-zero commitments, Setzer expects to see far more cases on greenwashing and misrepresentation, as well as corporate adherence to due diligence rules. “Whatever commitment is made now, there is always that consideration of ‘Can we really deliver?’ I think this is an area where the risk of litigation is very effective in creating behavioural change,” she told China Dialogue.

The financing of the fossil fuel industry is increasingly in the legal spotlight. Environmental law firm ClientEarth is taking legal action against the Belgian National Bank for failing to fulfil environmental protection and human rights requirements when buying corporate assets, many of which are from companies fuelling the climate crisis. Further cases against banks and other financial institutions are likely in future.

State support for the industry is also under scrutiny. And in December, the UK’s High Court heard a case brought by three climate campaigners against the government and its Oil and Gas Authority, challenging the spending of public money in support of the oil and gas industry. A judgment is expected in early 2022.

It will be one of several heavily anticipated decisions in a field that is expanding fast, employing diverse and creative legal strategies against a broadening set of defendants.