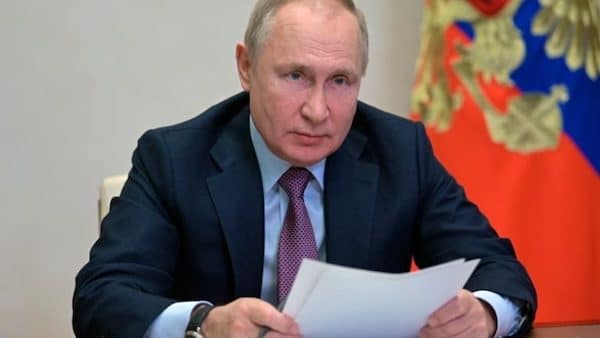 The Rossiya 1 state television in Moscow broadcast today President Vladimir Putin’s annual press conference on Friday. It conveys a much fuller picture of the grave crisis brewing in the Russian-American relations than what the excerpts in the Russian media sought to convey over the weekend.

Putin has, for the first time, explicitly warned that if the U.S. and NATO decline to provide the security guarantees Moscow has sought, his future course of action will be solely guided by “the proposals that our military experts will make to me.” Clearly, there is no more wriggle room left.

This is anything but the White House cliche that “all options are on the table” when Washington intervened in Venezuela or Syria. Putin implies that since core issues of Russia’s national defence are involved here, military considerations will reign supreme.

That is to say, Russia cannot accept NATO’s eastward expansion and the U.S. deployments in Ukraine and elsewhere in East Europe or the creation of anti-Russian states along its borders. And Russia expects “to reach a legally binding outcome of diplomatic talks on the documents.”

Unsurprisingly, Putin also said Russia will seek to achieve a positive outcome in the talks on security guarantees. Moscow is demanding an early meeting. Interestingly, the Kremlin spokesman Dmitry Peskov has underlined that Moscow is not seeking a presidential meeting between Vladimir Putin and Joe Biden.

The probability is low that the U.S. will agree to give a security guarantee to Russia in legally binding terms. There are obstacles on the way. For a start, Biden simply doesn’t have the political capital to carry the Congress along on a conciliatory path towards normalisation with Russia. A consensus is hard to reach among the U.S’. European allies, too, over the tricky issue of NATO expansion–that is, assuming that Washington is amenable to Russia’s demands (which it is not.)

The Russian Foreign Ministry warned yesterday that not only Ukraine and Georgia, but a possible inclusion of Sweden and Finland in NATO also will have “serious” military and political consequences that won’t be left unanswered by Moscow. Simply put, Russia expects the U.S. and its allies to fulfil the assurance given to Mikhail Gorbachev in 1990 that the NATO would not expand “an inch” further. (The Kremlin-funded RT publicised on Saturday the relevant declassified documents.)

Yet, the heart of the matter is that so soon after the debacle in Afghanistan, NATO’s withdrawal from Ukraine will irreparably dent its credibility. In fact, NATO may wither away if it stops expanding. Unless NATO can focus on an “enemy”, it loses its mooring and lacks a raison d’etre for its very existence. The transatlantic system will be in disarray if NATO starts drifting. And NATO happens to be the anchor sheet of the U.S.’ global strategies. It is as simple as that.

As regards Ukraine, the West bit more than it could chew when the CIA staged a coup in 2014 in Kiev to overthrow the elected government of President Viktor Yanukovich and had it replaced by a pro-U.S. set-up. The regime change agenda was pushed with no real understanding that present-day Ukraine is a country but not a nation.

Ukraine was the creation of Josef Stalin. In a brilliant essay last week, titled Ukraine: Tragedy of a Nation Divided, Ambassador Jack Matlock, the American envoy to Moscow who played a seminal role as the confidante of Ronald Reagan and Gorbachev in negotiating the end of the Cold War, has forewarned that Ukraine has no future without Russia’s helping hand.

On the other hand, the Deep State in the U.S. and large sections of the foreign and security policy establishment in the Beltway have been harbouring fantasies that the CIA can entrap Russia in a quagmire in Ukraine. Last week, David Ignatius at the Washington Post penned a column  threatening Moscow that it will face a full-blown guerrilla war backed by the U.S. if it dared to intervene in Ukraine militarily. Matlock’s essay will come as a cold shower to these daydreamers.

The main problem here is that Biden finds himself in a fix personally. Biden had a hands-on role in the regime change project in Ukraine. Whether President Obama delegated the dirty job to Biden or the latter asked fro it, we will never know. Suffice to say, Biden must take the responsibility today for the mess in Ukraine, which has turned into a kleptocracy, a bastion of neo-Nazis, a basket case, and a cesspool of venality and depravity.

One false step and Europe will have a refugee flow from that country (population: 45 million) of such massive proportions right on its doorstep that will make Syria seem a picnic–and this, at a time when the ghost of Yugoslavia is stalking the Balkans.

Equally, given his past record of being an ardent votary of Obama’s containment strategy against Russia, it will be a bitter pill to swallow for Biden if he were to be the Western leader chosen by destiny to underwrite Russia’s national security. And that too, with Vladimir Putin at the helm of affairs in the Kremlin, a leader towards whom Obama and Hillary Clinton harboured visceral hatred.

Biden himself has barely concealed his dislike of the Russian leader. Biden brought into his presidency as his foreign policy team people who are known to be Russophobes. The incumbent Undersecretary of State Victoria Nuland was personally involved in the regime change in Kiev in 2014 and is today in charge of the policies on Ukraine.

The protagonists in Washington have been delusional. Fundamentally, they fancied that Russia is a declining power–a broken, sulking, petulant country nostalgic for its superpower pedestal. Dire prophesies of Russian collapse have belatedly given way lately to a grudging acceptance that Russia is a persistent power. Russia’s resurgence–its soft and has power as well as its smart power–has taken the West by surprise.

The upgrading of Russia’s nuclear and conventional forces under Putin has produced staggeringly impressive results. Putin restored the nation’s pride that it is the “heir to an old and enduring identity–forged during the time of Peter the Great and persisting through the Soviet era–as a major player on the international stage”–to quote from a commentary by Andrew Latham, American professor in international relations, titled Reports of Russia’s decline are greatly exaggerated.

Why such a crisis at this point in time? The crux of the matter is that the U.S. has decided that it must first clip Russia’s wings before taking on China. Although there is no formal military alliance between Moscow and Beijing, Russia provides “strategic depth” to China simply by being a great power pursuing independent foreign policies and sharing an alternate vision to the so-called liberal international order in terms of a democratised world order based on UN Charter and multipolarity. The Russia-China relations are at their highest level in history today.

The pragmatism of the Russian elite is legion. The Americans apparently thought that the Kremlin can be placated somehow. Putin’s statements must have come as a rude shock. The point is, Russia’s maximalist demands and minimalist stance are one and the same. That leaves no leeway for wheeling-dealing for even a consummate politician like Biden.

“We have nowhere to retreat,” Putin said, adding that NATO could deploy missiles in Ukraine that would take just four or five minutes to reach Moscow.

They have pushed us to a line that we can’t cross. They have taken it to the point where we simply must tell them: ‘Stop!’