Since 1901, December has been a time for Nobel Prizes. Only in 1969, as an afterthought, the Swedish Central Bank established the Sveriges Riksbank Prize in Economic Sciences in Memory of Alfred Nobel—a decision that was met with protests by some members of the Nobel family. 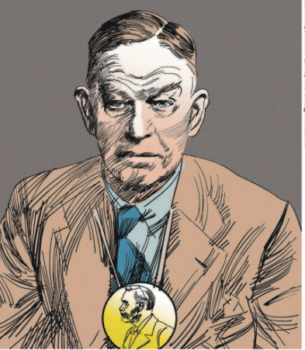 Nevertheless, a scientist who used much of his time on economics was rewarded a Nobel Prize in 1921. Admittedly, Frederick Soddy (1877–1956) received the prize in chemistry, for his work on radioactivity. But in the period from 1921 to 1934 Soddy wrote four books campaigning for a radical restructuring of the global monetary system.

I have been leafing through Soddy’s book entitled, ‘Money versus Man’, published in 1931.1 The book opens with a full-page quote from another English polymath, John Ruskin (1819–1900).2 The social problems of England in the 1840s—‘The Hungry 40s’—and the financial crises that followed in 1847 inspired Ruskin. The mass deaths in World War I and the crisis that started in 1929 provided new inspiration to Soddy.

For Ruskin, and later Soddy, consumption was the only purpose of the economy. ‘There is no wealth but life’ is the basic message in Soddy’s long quote from Ruskin. It is on this basis we should read the title of Soddy’s book, placing money as a kind of enemy for humankind. Here is a new type of economics: we have standard neoclassical economics, based on the metaphor of equilibrium between supply and demand, and we have evolutionary (Schumpeterian) economics based on a metaphor from biology (innovations as mutations). Soddy offered us a third angle: economics rooted in physics, in the laws of thermodynamics.

Humans survive, he wrote, based on the use of natural resources. If these resources are exhausted, we shall be in deep trouble. At the time Soddy was not taken seriously, but he is now seen as a forerunner for ecological economics. Romanian-born economist Nicholas Georgescu-Roegen (1906–1994) continued working in this tradition.

Soddy points to the fundamental difference between the biophysical resources and consumables—what he calls ‘real wealth’—that are subject to the laws of thermodynamics. This wealth will rot, rust, wear out, or be consumed. Money and debt—which he calls ‘virtual wealth’—are only subject to the laws of mathematics. Money can grow without limits, whereas the real economy cannot. In this mismatch, says Soddy, lies the roots of most of our economic problems.

A core subject for Soddy was therefore the underlying mismatch between the real economy and the monetary economy. This problem had been recognized already in Mesopotamia under the rule of Hammurabi (1810–1760 BC).3 Advised by his mathematicians, he solved the problem by cancelling debt with unpredictable intervals, a practice which in the Bible’s Old Testament survives under the term ‘Jubilee Years’. In 1772 the Welsh moral philosopher and mathematician Richard Price (1723–1791) formulated the problem—or opportunity—in this way: ‘A shilling put out at 6% compound interest at our Saviour’s birth would…have increased to a greater sum than the whole solar system could hold, supposing it a sphere equal to the diameter of Saturn’s orbit’.4 Even if we calculate Saturn’s orbit as we know it today, this would be a considerable lump of gold. Today it serves as a proof that any system involving compound interest sooner or later will collapse, as during financial crises.

A core subject for Soddy was the underlying mismatch between the real economy and the monetary economy.

In my view Frederick Soddy was right when it comes to the mismatch between the financial economy and the real economy, but the pessimism we often find in ecological economics does not necessarily follow from his teachings. Here the U.S. economist Erasmus Peshine Smith (1814–1882) has an explanation as to why there are certain areas where we do not have to be that pessimistic.

Peshine Smith placed Man’s harnessing of Nature’s energy as the main moving force of the economy.5 To Peshine Smith, Nature’s resources, especially her energy resources, have an infinite potential, in contrast to Malthusianism, Soddy, and part of ecological economics. In a sense Peshine Smith kept alive the spirit of the Renaissance and of Man’s undeveloped potentials.

Peshine Smith sought to develop economics into a quantitative engineering science: ‘to construct a skeleton of political economy upon the basis of purely physical laws.’6 He believed all economic laws to have their counterparts in those of the natural sciences, and proceeded to characterize the reproduction of wealth as a vast energy-transfer system within Nature’s overall equilibrium, the basic question being the extent to which Man would proceed to exploit Nature’s latent wealth.

He wrote to Henry Carey, a fellow economist: ‘The entire universe then is motion, and the only point is how much of the universal and ceaseless motion we shall utilize, and how much we shall permit to be working against us.’ His holistic view of the planet as described in the ‘Law of Endless Circulation in Matter and Forces’ is decidedly both ‘modern’ and ‘ecological’. Solar, thermal, and wind energy are the proof.

As indicated, to Peshine Smith economic growth was a product of the forces of nature—harnessed by Man—substituting for manual labour. ‘Twenty years ago’, says Smith, ‘a paper box of matches sold for a shilling. Now as many matches, of superior quality, are sold for a halfpenny’—i.e. the price had been reduced to 1/24. ‘…in the meantime, by improved chemical and mechanical combinations, twenty-five boxes had come to be made by the same expenditure of human labour as one match required in its day.’ In a box with twenty-five matches, says Peshine Smith, twenty-four may be regarded as the contribution from Man’s harnessing of Nature—a Nature who gives her aid, and asks no recompense—and one as the result of muscular action.

Returning to the crisis with which we began, in a very informative New York Times op-ed in 2009, U.S. ecological economist Eric Zencey (1953–2019) notes that Frederick Soddy had distilled his vision into five policy prescriptions, of which four since have become conventional wisdom: to abandon the gold standard, to let international exchange rates float, to use federal surpluses and deficits as macroeconomic policy tools that could counter cyclical trends, and establish bureaus of economic statistics (including a consumer price index). Soddy’s fifth proposal—the only one that remains outside today’s bounds of conventional wisdom—was to stop banks from creating money (and debt) out of nothing.

During the crisis Soddy lived through, the one that started in 1929, the imbalances between the real economy and the monetary economy were solved with Keynes’ theories that increased global demand. During the last crisis which started in 2008, the problem was instead solved by printing more money. In the U.S. this was done by by Ben Bernanke—who referred to ‘helicopter money’—and in Europe it was done by Mario Draghi. We can only assume that if Frederick Soddy had been with us today, he would have argued that this operation made the imbalance between the real economy and the financial economy even worse. The social consequences were indeed the opposite. If we look at the crisis of the 1930s in the U.S., income to capital as a percentage of GDP actually sank, while wages as a percentage of GDP rose7 (those who kept their jobs, kept their wages). Now the reverse has happened. In 1970 wages represented about 52% of U.S. GDP. In 2013 that percentage was under 42%.

Reading Frederick Soddy reinforces an uneasy intuition that we may have a crack ahead of us.

Erik Reinert is Professor of Technology Governance and Development Strategies at Tallinn University of Technology.