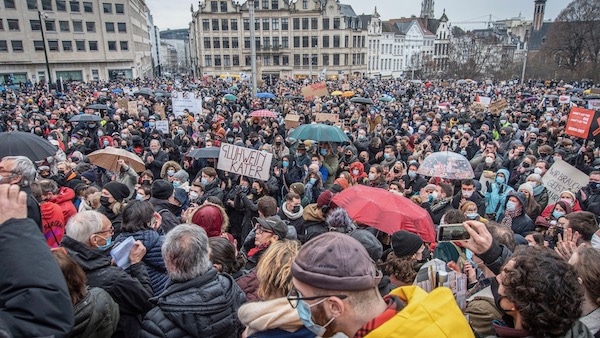 On Tuesday, December 28, Belgium’s Council of State decided to suspend the closure of the cultural sector, announced last week to mitigate the surge in COVID-19 infections caused by the omicron variant. This was following widespread outrage from the artists’ community and workers from the cultural sector.

On Sunday, December 26, thousands of people from various sectors of the arts and entertainment industry gathered at the Mont des Arts in Brussels, demanding the government to reverse its decision targeting the cultural sector while Christmas markets and other businesses are allowed to continue. The protesters accused that culture is being sacrificed for economic and short-term interests. They raised slogans such as ‘Show Must Go On’ and ‘No Culture No Future’.

The Belgian government’s new regulations announced on December 22 to curb the omicron surge, including the closure of theaters, cinemas and concerts, were in effect from Sunday. The artist community has accused that major economic activities of the season like Christmas markets and Gluhwein parties are allowed to continue. Even restaurants and bars are allowed to run their business with some new restrictions. On Tuesday, De Standaard reported that succumbing to the protests, the Council of State has decided to suspend the closure of the cultural sector, admitting that the decision was ‘disproportionate’ and ‘not based on adequate motives’. There will be an evaluation of the epidemiological situation next week in order to chart out adequate regulations if needed.

In an earlier statement, the cultural workers platform Green Light For Culture & Events had said,

After two years of hard work, financial investment, good will and flexibility, our sectors were closed again on December 22. A decision that feels like a punishment, because it wasn’t advised by the GEMS: Belgium’s coronavirus expert group. The public and staff working in the events and culture sectors were also not in agreement with this measure. The rally not only called for the reopening of both sectors, but also to redefine a framework that would be viable and profitable in the long run, as well as needed supporting measures. Not a yo-yo politics, but concrete solutions.

Regarding the closure of the cultural industry, Raoul Hedebouw, president of the Workers Party of Belgium (PTB/PVDA), said that “the government needs to hear the enormous anger being expressed and admit that it was wrong. There is no legitimacy neither scientific nor democratic for such a measure.”

The PTB/PVDA has also officially asked the different parties present in the government’s consultative committees to review the decision that was made.

With the rise in infections caused by the omicron variant of COVID-19 across Europe, countries including Belgium are on high alert. As of December 29, there were 343,809 active COVID-19 cases in the country. 9,965 new cases and 32 deaths were reported on December 29 alone. According to reports, as of December 28, 8,792,678 people in Belgium–around 76.32% of the total population–are fully vaccinated.