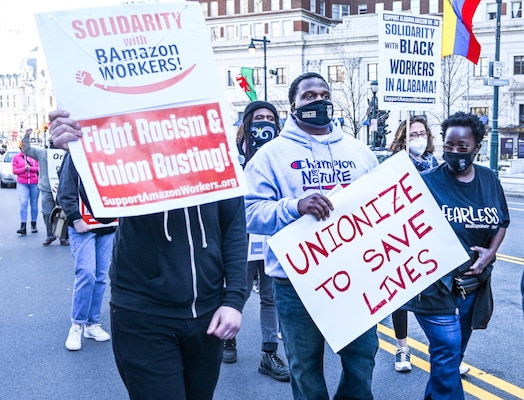 A Philadelphia rally from March, 2021 in solidarity with the drive to unionize Amazon in Bessmer, Alabama. Credit: Joe Piette, Flickr.

Thomas Hummel discusses why the deaths caused by more than thirty tornadoes across the midwest were anything but natural, but the result of capitalism’s drive for growth and profit, no matter the consequences to workers’ lives or the planet.

Six workers at an Amazon warehouse near St. Louis in Edwardsville, Illinois, and eight workers at a candle factory for Mayfield Consumer Products in the small western Kentucky town of Mayfield were killed by a tornado outbreak on December 10 that impacted much of the midwestern United States.

There was nothing “natural” about this disaster. While it is hard to pin any given tornado directly on climate change, tornadoes in December are typically extremely rare, since warm air is what gives them their fuel. The weather in the affected region had been unseasonably warm. Associate professor of atmospheric sciences at Northern Illinois University Victor Gensini remarked, “I remember waking up, looking at the weather maps and saying, ‘Geez, this looks a lot more like late April than mid-December.’” Climate change has caused an increase in the frequency of tornadoes over the past twenty years. 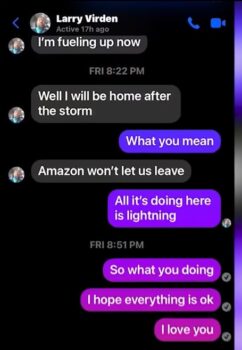 There was another way that this disaster was not natural. The deaths of all fourteen workers were absolutely preventable. As the weather worsened, workers at both locations requested to go home out of fear for their safety. At both businesses, they were told that if they left, they would be fired.

It boggles the mind that anyone is capable of reconciling the idea that our society is based upon the most unrestricted freedom in the world, and the fact that workers can be told that if they insist upon keeping themselves safe in the immediate present, they won’t be able to feed themselves and their families in the near future. This is in reality the most horrific kind of tyranny, and it’s the reality of low-wage, at-will work.

Far from being a one-off situation for Amazon, the company has a history of putting profit above the safety of its workers during climate disasters. In the Pacific Northwest, Amazon employees were forced to work through a record-breaking heatwave over the summer, with temperatures in their warehouses reaching up to 90 degrees. The company even ran “productivity contests” during the heat waves. Similarly, during Hurricane Ida in New York City, Amazon employees were forced to stay on the job as the city experienced the worst flooding in its history.

Companies like Amazon carry a massive share of the responsibility for climate change. Having implemented nothing but performative measures to minimize their climate impact, they are now forcing their employees to risk their lives in the midst of climate disasters so they can continue to make the company enormous profits. Those profits reached 20.33 billion in 2020. I suppose that employees can rest in the comforting knowledge that their suffering helps contribute to Bezos’ megalomaniacal dreams of leaving an earth he’s poisoned to colonize space.

It’s truly unbelievable that this is legal. There have been attempts to make it illegal to fire workers for not coming in during a “natural” disaster, but Amazon has fought against legislation that would have prevented this catastrophe from happening.

The mainstream liberal media has an ambivalent attitude toward Amazon. On the one hand, they celebrate its success and efficiency as a glowing symbol of the power of the free market. On the other hand, Amazon has become something of a bogeyman. They point to some of Amazon’s predatory practices as an aberration, a monster in whose absence the system would otherwise function according to their utopian imaginings. But the reality is that Amazon exists within a competitive system, and that competition means that they are pushed toward practices like these. It’s true that Amazon has “out-monopolized” the monopolies, but as companies adapt their business practices to resemble Amazon’s, the company has to push ever harder to maintain its position. It’s their workers who bear the brunt of this. The company guarantees two-day delivery, a practice that more and more companies are copying, and if they are unable to deliver on this, they risk losing market share. This dynamic is brought to a fever pitch during the holiday season, when workers are pushed harder than at any other time of the year. The deaths in Mayfield, Kentucky further highlight how this is not just an Amazon problem, but a systemic problem with capitalism at its root. 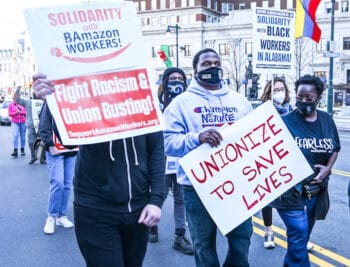 A Philadelphia rally from March, 2021 in solidarity with the drive to unionize Amazon in Bessmer, Alabama. Credit: Joe Piette, Flickr.

All of this highlights the dire need for workers to form unions. A good union could protect employees from firings when a company threatens expulsions if workers act rationally to keep themselves safe. It could inform them of their existing rights, and give them the confidence that they will not have to have to take on the company alone if they stand up for them. Having a union would allow workers to have a say in their safety at work, rather than trusting the unaccountable bosses of their company to take the right steps for them. Experience has shown that unless forced, companies will not take these steps.

Amazon spent nearly $10,000 a day on consultants to defeat the unionization drive in Bessemer, Alabama. But the National Labor Relations Board has ruled that Amazon engaged in union-busting practices during the union drive, and there will be another vote at the facility. On a more level playing field, there’s hope that the workers may vote for a union this time around. Independent of their union-busting tactics, Amazon also has such high turnover in its warehouses, with three percent of the workforce there quitting each week due to inhumane and unsafe working conditions, that it makes any effort to organize a union logistically difficult. Needless to say, there’s still a long way to go to unionize the company, but there are encouraging signs, such as the newly elected president of the Teamsters stating that unionizing the company is one of his top priorities. Successful union drives also have the potential to build on one another, and workers may look upon the victory of Starbucks workers in Buffalo, New York, and the way that success has already spread, showing them that it makes sense to fight for a union to improve their own lives.

The relationship between capital and labor is like the relationship between wolves and sheep. You can build a fence, and hire a shepherd to keep the sheep safe, but there is no way to change the essence of that relationship, which is inherently predatory. The ideology of capitalism makes every effort to disguise the nature of this relationship. But the death of the workers in Edwardsville and Mayfield is evidence to millions of the wolves’ nature. Forming a union is like building that fence, and hiring that shepherd, but ultimately Amazon workers will have to use that power to go further, to push for an entirely different sort of relationship, where the sheep can stand upright and become human.