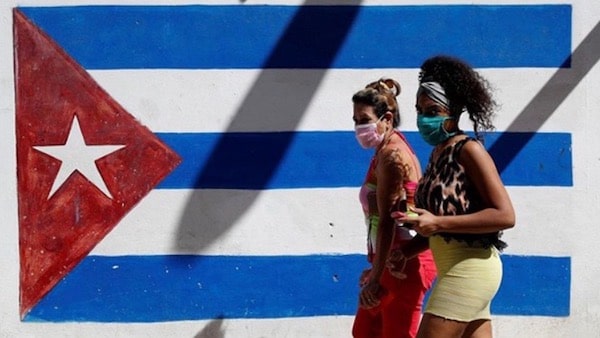 In yet another success story from Cuba, the country has fully vaccinated more than 85% of its population, and another 7% have got their single dose. This is more than most other developed countries, including the United States. And this is despite the six decades-long trade embargo that the U.S. has imposed on the small developing country.

In Cuba, children below five years of age have also been vaccinated, while the world over, Big Pharma companies are still developing vaccines for this age group. The vaccination drive in Cuba includes children in the age group of 2-18. 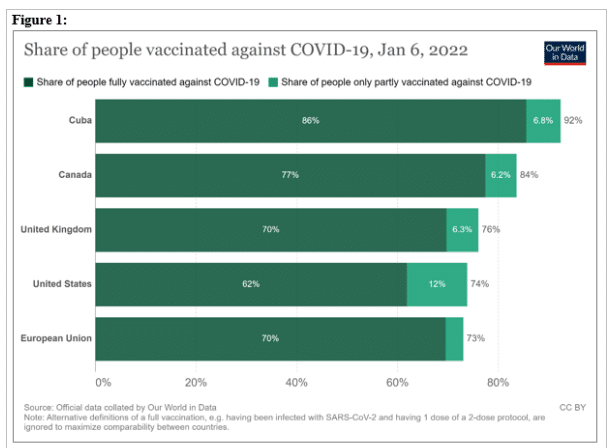 Meanwhile, highly developed countries such as those in the European Union, the United Kingdom and the U.S. have only managed to fully vaccinate about 60-70% of their population.

Cuba has been able to vaccinate its people with the help of indigenous vaccines. It has successfully developed five indigenous vaccines of which Abdala, Soberana 02 and Soberana Plus have been approved and are being used. Two others–Soberana 01 and Mambisa–are still undergoing clinical trials and are yet to be approved. An advantage of these vaccines is that they are based on the traditional technology of the protein sub-unit, making them easy to use. They can be kept in a fridge or even at room temperature and be administered to children.

Cuban scientists are also working on the first prototype of Soberana Plus as an effective vaccine against the Omicron variant.

Sharing vaccines as well as technology

Not only has Cuba succeeded in vaccinating most of its population, including children, it has also started sending these vaccines to other countries that have approved them. Venezuela, Vietnam, Iran, Nicaragua, and Argentina and Mexico are among the countries that have either approved the Cuban vaccine or expressed interest in doing so. Recently, Mexico approved the use of Cuba’s Abdala vaccine.

This is despite the trade sanctions and the embargo imposed on Cuba by the U.S. since the 1960s. These sanctions made Cuba vulnerable in financial and political terms where only a few allies and supporting countries get into agreements with Cuba. Most recently, during his presidential term, Trump signed more than two hundred directives that attacked the Cuban economy. Since 1992, the United Nations General Assembly has passed a resolution every year demanding the end of the U.S. economic embargo on Cuba. The U.S. and Israel have consistently voted against it.

As reported by Oxfam, the sanctions imposed by the U.S. have not only crippled the Cuban economy and affected people but also impacted the raw materials for developing vaccines and diagnostics.

Cuba has not just given these countries vaccines for immediate administration but also provided them with technology to produce these vaccines. The vaccines are produced by the Center for Genetic Engineering and Biotechnology or CIGB (Abdala) and Finlay Institute (Soberana 02), research institutes set up and run by the government. While Venezuela and Vietnam have already started administering the Cuban vaccines, Syria has also talked with Cuban officials to strengthen health-related cooperation. In March, Cuba sent 100,000 doses of its Soberana 02 vaccine to Iran, and both Iran and Nigeria have agreed to partner with the country to develop their home-grown vaccines.

An end-to-end technology transfer means that the country getting this technology can set up a domestic manufacturing plant and replicate the production of the vaccine from start to finish. This helps build the manufacturing capacity of the recipient as well.

This is in sharp contrast to the Big Pharma companies located in the developed countries, which have refused to share technical know-how. Most of the rich, developed countries have also opposed the TRIPS waiver proposal, which calls for non-enforcement of patents on crucial drugs, vaccines and medical products during times of the pandemic. Even after 15 months, the proposal is still under negotiations, with the countries in Europe and the Big Pharma lobby stalling it.

Supporting other countries–during pandemic and in other times

The successful vaccination drive in Cuba rides on a well-developed bio-pharmaceutical industry that is state-owned. It ably caters to the domestic needs for medicines and medical products, keeping these affordable for and reaching all sections of the population. This supports the robust public health system that Cuba has built over the years for the people.

Cuba has also emerged as an essential exporter of bio-pharmaceutical products worldwide and its doctors have provided vital assistance to a number of countries.

In 2020, as the COVID-19 pandemic spread, while countries focused on merely their own needs, Cuba sent teams of doctors to other countries. Teams of doctors were sent to the Italian regions of Lombardy and Piedmont in the early days of the pandemic in 2020. In March 2020, teams were also sent to Andorra, a small country between France and Spain, which was grappling with a collapsing health system. Building on Cuba’s long tradition of medical internationalism and solidarity with Africa, teams of medical professionals were deployed in a number of countries such as Togo, South Africa, Cape Verde, Sierra Leone, São Tomé and Príncipe, Equatorial Guinea, Guinea Conakry, Guinea Bissau and Kenya.

The efforts of Cuba’s Henry Reeve International Medical Brigade were widely hailed and there were calls across the world for them to be conferred the Nobel Peace Prize.

A classic example of this solidarity was from March 2020 when a relatively small town in Italy, Crema in the Lombardy region, was facing a healthcare crisis amid a surge of cases and overwhelmed health facilities. According to a detailed report, Mayor Stefania Bonaldi had alerted national and international authorities asking for help. Soon 52 Cuban healthcare professionals arrived in Crema.

Bonaldi narrated that “their sense of humanity left us overwhelmed,” and they showed “a particular sensibility and attention that characterizes their way of looking at the world.” Crema witnessed a system of care that is organized door-to-door, where “the relationship between doctors and their patients is much closer.” The report explains how the Italian healthcare system is controlled on a regional basis, with every region reasonably independent in the decision-making process. Lombardy, which saw the privatization of healthcare for the past decade, now has fewer public hospitals.

And this is not the first time that Cuba has come to the forefront in responding to health and humanitarian crises across the world. Be it the earthquakes in Indonesia and Pakistan, a cholera outbreak in Haiti, or the Ebola epidemic in West Africa, Cuba has been there to help the people and the governments. Cuban medical workers have served in different countries, including Guatemala, Ethiopia, East Timor, Ghana, Brazil and Tanzania.

The Cuban model clearly shows the importance of building a strong public health system and developing the public sector bio-pharmaceutical industry and research institutes. The Cuban model provides an alternative framework–putting people before profits. In contrast, despite global calls by WHO and others, Big Pharma, supported by governments in rich countries, has prioritized patent monopolies and profiteering. As explained by the mayor of Crema after the experience of working with Cubans during the pandemic,

I believe that this should push us to think about the fact that healthcare should be public, at least for the most part.