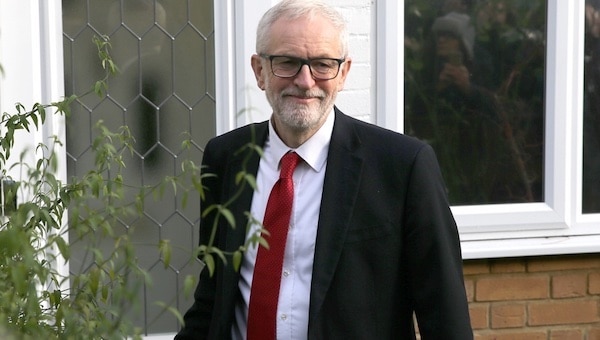 TWITTER was awash with rumours about Jeremy Corbyn at the weekend–specifically that he might be considering taking the plunge to form a new political party, having accepted that he will never be reinstated as a Labour MP.

The fact this was first reported in the Telegraph led to understandable accusations of mischief-making. However, the overwhelming response on the left (and from some on the right hoping for a split Labour vote) was: “I bloody hope this is true!” That was my response too.

I’m done with being Ms Negativity. I’m done with spending 99 per cent of my political activism aimed at attacking rather than promoting.

And I’m not alone. For five years, we had a vision to fight for. It is devastating emotionally and mentally to go from that to absolutely no hope at all.

Going round saying “a plague on all their houses” might make us less controversial guests round the dinner table, but it makes us more depressed people.

The prospect of building slowly from within the Labour Party is now entirely defunct. We don’t have time for slow movement-building.

And we don’t have the heart for it either. We are all spent from five years of internal warfare, defending one of, if not the, best leader the Labour Party ever had, from sabotage by the PLP and party staff.

The disgraceful treatment of Jeremy Corbyn and left-wing members hasn’t sparked a desire to reclaim the Labour Party.

Instead it has sparked a mass exodus. That is simply human nature. No stirring battle cries from well-paid Labour socialist MPs will inspire financially hard-pressed socialists to part with their money to fund a party to which they no longer feel any affinity.

And time to spark real and lasting change is running out. We would need decades to rebuild from within the party. We don’t have decades.

If I believed the Labour Party in its current incarnation would tackle these crises lining up to destroy our children’s future, I’d get behind it, despite my personal anger towards Keir Starmer for his sabotage of the last general election with his Brexit policy U-turn. I’d hold my nose and vote Labour for the greater good. That’s not the case, however.

Starmer has had ample time to give us some hope. Instead he has used the last 21 months to either attack the left or make clear his lack of vision via a number of boring relaunches, summarised by even more boring, vacuous slogans.

Why do that if you are then going to run with exciting, socialist ideas? For the optics maybe? A case of smoke and mirrors, knowing the policies are popular but the idea of socialism isn’t?

If that’s the case, the man has the integrity of a romance scammer and I wouldn’t trust him to enact radical socialist policies even if he suddenly claimed them for his own.

I do, however, have immense trust and respect for Jeremy Corbyn. Millions of people do. He’s a man of honour and integrity. He’s a man who is not scared of the Establishment, of talking truth to power. And that’s what our political landscape needs right now.

I am under no illusions that a new party, headed by Jeremy, would suddenly surge to victory in a general election. What it would do is pose a threat to a far too comfortable Labour Party waiting for their inevitable turn at power.

The Tories will have been in for 13 years next year and they are living on borrowed time. The anger felt over Starmer’s Remain policy which drove many lifelong Labour voters either into Tory arms or to not vote at all in 2019, is on the wane.

Many will swing back to Labour whoever is leader, especially after the recent Tory scandals which have tripped over each other in their frequency.

So Starmer is sitting there, rubbing his hands in arrogant glee, knowing all he has to do is not cock up too badly and his time will come. And when it does, he will claim it was his purge of Corbyn and the “hard” left that won it. Then it will be business as usual.

Fuscia Labour will tweak the status quo but they won’t change it dramatically. Any positive changes they implement will be nice and easy to reverse for their Tory friends when their inevitable turn comes around again.

This revolving door of not much changing can only be challenged by a new party and that new party has to be headed by Jeremy Corbyn.

Why Jeremy? Because he is the most unifying figure the left have. Because he’s the most inspiring political figure for generations. Because he has the political weight and credibility to light that spark. His age isn’t an issue. Bernie Sanders was six years older when he ran for U.S. president.

The only issue is if Jeremy wants to do it. Obviously if he doesn’t, we will have to accept and respect it. No-one would blame him after the lies and smears he endured for the last six years. I would however urge him to give it serious consideration. Those lies and smears are never going away. He will never be the safe, elder statesman. He’s too threatening a figure for that to happen.

So he might as well run with that anti-Establishment reputation and use it to force change on the status quo. He is, after all, a tireless fighter for peace and justice.

No cosy, quiet retirement on his horizon. Jeremy wants to bring about real and lasting change for the better. That’s all he’s ever wanted. And so do we. We are a good match. We proved that for five years. We are capable of putting the wind up the Establishment when we join forces, and while thousands have joined his Peace and Justice Project, hundreds of thousands would join the Peace and Justice Party.

It would hold Labour’s feet to the fire. It would shake them out of their current complacency the way Ukip shook the Tories out of theirs which forced them to put an in/out EU referendum into their manifesto.

I personally don’t think any other political intervention would touch the sides of the change this country needs. I’m going to urge anyone who agrees with me to join the Peace and Justice Project today.

If a new party is going to stem from that project, it needs a good foundation to spring from and a large membership would provide that. Who knows? It might sway Jeremy to take the plunge.