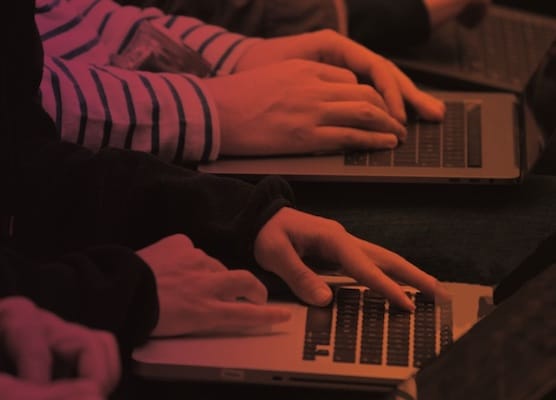 Jason E. Smith’s book Smart Machines and Service Work: Automation in an Age of Stagnation is, as the title suggests, about automation, service sector and economic stagnation. He analyses the trend of automation in the capitalist social system over the last century and argues that it is impossible for a ‘“full” automation of the economy–the uniform application of automation across all sectors, with a resulting replacement by machines of all or most of the labor employed–[…] in a social formation founded on wage-labor’ (121). This is in fact the crux of his argument and is directed at discourses of automation that do not inquire into the political economy of its foundations. 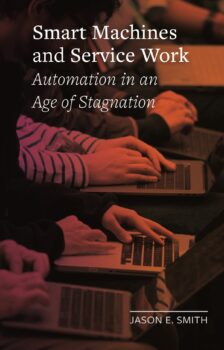 Smith situates automation within capitalism and argues that it is impossible to effectively make use of automation for the betterment of all, even if one wishes so. There is no incentive for the capitalist system to automate if it doesn’t return profit. By the same token, what is automated in a capitalist system is only those sectors whose automation is beneficial for further profit. Consequently, while some sectors see very high levels of automation, others see inverse trend. This is because automation in one sector creates a labor force now evicted from that sector, acting as a huge reserve army to be called into other sectors. Since their numbers are large, and are designated as un-skilled in the new economy, their wages are kept at a minimal. This acts as a disincentive for the owners of the latter sector to automate since employing labor power is cheaper than replacing them with machines. And both these trends–of automation in one sector and lack of automation in another–are the results of the same structural dynamism of capitalism which measures wealth in terms of the value of labor power at a time when the capital-labor dialectic is in crisis.

But Smith’s aim for the study is not restricted to predicting patterns of automation and what is specific about automation in capitalism, which he does in detail in different chapters. Rather, what he is concerned about is the task of working class–as a class for itself taking charge to change its condition of existence–in this new reality. The working class is deeply fragmented, with the possibilities of collective organisation typical of the twentieth century organisational forms far from a concrete possibility. In fact it is structurally impossible to imagine such a collective subjectivity amidst such differences in skills and bargaining power, he argues (138). In this respect, his inquiry into the nature of automation is a political task by its very nature.

The book is divided into seven chapters with a discussion on Automation 2.0 acting as the introduction to the chapters. In these chapters he traces the trends of automation in different sectors of the economy. Smith begins with Friedrich Pollock’s definition of automation as a ‘technique of industrial production [in which] the machines are “controlled” by machines’ (23), and shows that this trend of automation, while increasing labor productivity in the industrial and manufacturing sector, is also the reason for a lack of automation in the service sector. He derives the political economy of this trend from Marx’s analysis of capitalist production where the production process of material goods needs to be constantly revolutionised to eliminate the necessary labor required so that profit is returned to the capitalist at the end of the production process. This process had increased the productivity of labor and has historically been the source of wealth in capitalism. But as Marx had examined, there is a tendency of decline in the rate of profit and Smith places the introduction of automotive production processes from the 1960s in this milieu of decreasing labor productivity. Automation, within what has been traditionally considered the productive sphere of the capitalist system, has brought an immense increase in material wealth; but correspondingly, it has also displaced the necessary labor required to perform these tasks within productive spheres like manufacturing and automobiles. And it is in this change in the composition of capital–the change in the ‘capital-to-labor ratio’ (96)–that Smith brings in the service sector and automation.

Smith weaves together the whole of this process also with the financialisation of the global economy when he traces trends in the stock market along with how new big companies of the world make use of their profit. While in an earlier structure of capitalist production, big business involved in manufacturing or factories invested their profit in further increases in machinery and labor productivity, the new IT giants use that money to buy back stocks; a mechanism that has no impact on the productivity of labor in the economy. In fact their only motive is an arbitrary increase in stock value, through ‘underbidding competitors and absorbing enormous losses for years, or by snapping up potential competitors before they can establish themselves as genuine threats’ (51). The other business that is booming is the personal care sector and in ‘circulatory labor’ which includes ‘activities necessary for the buying and selling of goods, covering almost every moment in the capitalist valorization process between the end of the production process and the transfer of ownership from producer to consumer’ (100). The companies that are the wealthiest or are able to attract investment in the present era are in fact companies that fall in either of these categories.

In this context, how and why hasn’t automation brought out the internal contradiction within capitalist system and collapsed? There hasn’t been an increase in labor productivity in decades in most of the Western world, and there has been a huge gap of wealth between those who own most resources and the majority who own nothing and whose wages have stagnated and whose skills have been levelled. Here Smith brings in the role of the service sector in absorbing the large number of workers laid off from the productive sectors of the economy. The service sector, economic stagnation and automation meet at this point to address this crisis in capitalist socio-economic formation in today’s world. While a similar laying off of workers from the agrarian sector in the previous decades and their absorption into the industries of the twentieth century gave opportunity to organise and collectivise, the new re-organisation of labor power in the service sector is identified by Smith as structurally separating each worker from each other. And because the tasks of service sector employees are deemed unskilled, they also do not have the bargaining power to stop the machinery, as what was possible with the workers of the industrial era through strikes and sabotage.

The book was written before the full extent of the COVID-19 pandemic was visible and while Smith mentions the pandemic in passing, the book can offer significant insight in making sense of the situation of countries today. Smith had tentatively identified the role of low-skilled care workers in the health care sectors and those in the logistics network who cannot be replaced by machines due to the particularity of their tasks and because of their low wages. During the pandemic, it has in fact become evident that they are in fact the most ‘disposable’ labor force–not just in terms of their labor power but due to the low value of their lives–and while the pandemic could have induced conditions for an objective mass strike, capital was able, by using disposable workers, to recompose itself and present itself as the solution for the deep crisis in which we find ourselves.

This brings focus to the last part of the book which peculiarly identifies teachers as the one section of the labor force that cannot be replaced at all and who have bargaining power compared to the disposable kind mentioned above. Smith points out that teachers ‘operate with relative autonomy in their classrooms, less affected by a ramified technical division of labor’. And a strike by this group can ‘reveal their crucial place in the social division of labor, causing widespread disruption at least at the local level, as parents scramble to find someone to care for their children’ (140). More than what one particular school teachers do in terms of strikes, what is important for him is what a large section of a school teachers’ strike can do within the reproduction of the society. And since their jobs are local and involve a high degree of interpersonal relations–hence the difficulty to automate–they have a unique bargaining power. But the pandemic has been one such a strike–objectively–that forced schools to shut down and revealed its place in the regimentation of the overall society. But the sector also acts as a new site of accumulation with remote learning techniques, panoptical level surveillance of each activity of the teachers and a complete subjugation of the state education apparatus by big-tech companies. It seems that the last frontier identified by Smith is under direct attack through the opportunity opened to capital in the form of the pandemic.

Smith ends the book by asking about the organisational form that labor can take in this conjuncture. The welfare consensus between labor and capital, during which workers held a share in social wealth, rested on the increasing productivity of capitalist enterprise and the necessity for capital to invest in machinery that would increase productivity. But this period is gone, and so is the period of labor militancy that took particular organised form in trade unions, for example. New forms of worker militancy are not to be found here, and are often actively waged against trade unions who act as mediators for capital. In such a scenario, what is to be done? Smith leaves it as an open question and hints that only concrete action of workers themselves can illuminate the forms militancy can and might take.

Manu V Mathew is a PhD candidate at Central Institute of Education, University of Delhi. He works on the political economy of engineering education in India.